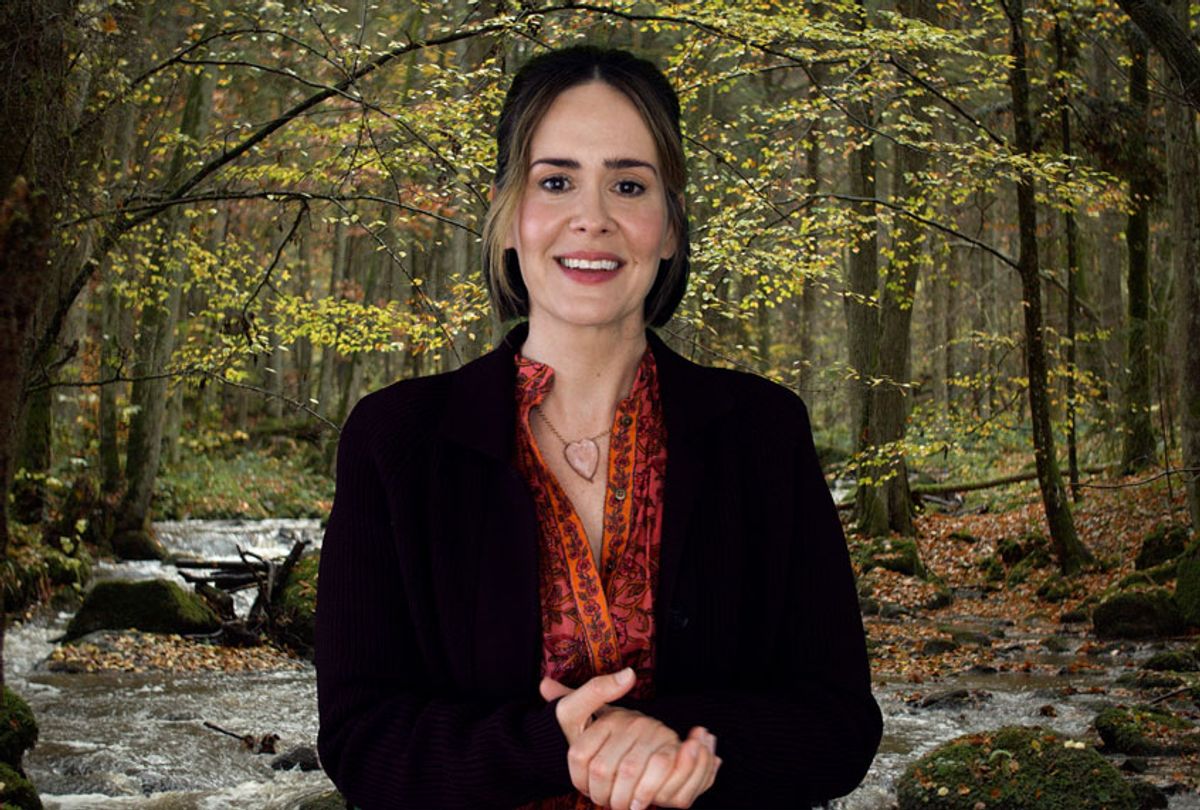 Is the Volvo-driving liberal a thing anymore? That label used to be a favorite insult among right-wing talk radio junkies in the late '90s and the early aughts, before Fox News perfected its brand of hypnotism and added a few more dismissive broad strokes to put progressives in their place: NPR listening, latte sipping, chardonnay swilling. Eventually the list of bleeding heart luxury habits grew too long to efficiently spit in a snowflake's face, so someone handily boiled it down to a simple, two-word catch-all description of lefty snobbery: coastal elites.

The new HBO special "Coastal Elites" is playwright Paul Rudnick thumbing his nose at Trump and anyone else unwilling to consider Rudnick's form of liberalism – which, at last poll check, would be around 43% of the country. The title announces that Rudnick's playing to one side of the partisan divide here without apology or compromise, distilling his emotional unrest into the five characters we meet across the nearly 90-minute piece.

Originally Rudnick intended "Coastal Elites" to debut at the Public Theater in New York, a piece of trivia that may be useful to keep in mind while watching Bette Midler, Dan Levy, Issa Rae, Sarah Paulson, and Kaitlyn Dever seamlessly perform their monologues. Each does as much as they possibly can to approximate human-to-human connection through the camera's lens, with each segment transforming the viewer into a silent witness of some variety.

To Midler's Miriam Nessler, a lifelong New Yorker and acolyte at the altar of culture, we are a cop hearing her confession. To Levy's Mark Hesterman, an aspiring actor living in West Hollywood, we are a therapist; for Rae's Callie Josephson, we are a sympathetic bestie. Paulson's meditation-focused YouTube personality Clarissa Montgomery makes us her audience.

Dever's burned-out ER nurse Sharynn Tarrows takes it home with a report from the frontline battle against COVID-19's ravages that manages to be the most affecting of all the monologues owing to the actor's emotionally wrung out presentation of a story that that ends one version of a tragedy that's played out nearly 200,000 times since January, when the pandemic began to break out. Her character is a Wyoming nurse who flies to New York to assist the overwhelming hospital workers in April, and to her the viewer becomes anyone, everyone. Americans.

"Coastal Elites" doesn't pretend to be for everyone, and it's about as direct in its play to the anti-Trump crowd as it can possibly be. Nevertheless, I can't help but wonder who actually has the stomach for Rudnick's Trump-enraged quarantine view into the left-leaning electorate psyche.

Our shared trepidation is acknowledged in the opening credits introducing "Coastal Elites" at first as "Five heart-tugging monologues," before crossing that out, and doing the same with its revised summary of "Five unhinged rants." At last, as the signature theme of Edvard Grieg's "In the Hall of the Mountain King" impishly prances in the background, we arrive at what this special is meant to be: Five desperate confessions from people coping with the new abnormal. Then the graphic qualifies even that, adding "barely" before "coping," tinging the word a furious flush of pink that seethes into red.

Concise and smooth as Jay Roach's direction is here, and as engaging as the performances are (with Levy's variously shaded passions stealing the show, which is saying something in a special that co-stars Bette Midler), this is still a Trump-bash-a-thon debuting at a point of massive fatigue and fraying anxiety at the possibility that we might be in for four more years of this madness.

It's hard to say whether Midler's Miriam Nessler would be charming in say, 2016, but every drop of New Yorker fury that Midler wrings out of her soul and pours into Miriam's tale of antagonizing a Trump worshipper feels increasingly stressful. Part of that strain to the nervous system is a credit to Midler's surefooted delivery, but part of it is the stomach sickness that is the product of being doused in smugness. Only here it comes at us from both sides – the MAGA-hat villain and from Miriam's insistent righteousness.

Midler's opening slice, titled "Lock Her Up," is about a concentrated a dose of this as we get, fortunately. Levy's "Supergay," time-pegged to March – a leap ahead from Miriam's January confession – is at once infuriating, comical and bracing. It is meant as a rejoinder to the dangerous homophobic bigotry espoused by Vice President Mike Pence in the same way that Rae's segment "The Blonde Cloud" and its June timestamp is an indictment of the opportunistic fakery Ivanka represents in the midst of the Black Lives Matter protests.

Each of these segments ends on a note of triumph. Each also arrives at a point at which "Coastal Elites" begs for a live audience's energy. Midler's line quoted above is a one of those easily imagined as coaxing out peals of laughter and applause from a sympathetic crowd ready to own its preciousness and nod in agreement when she declares of live theater's importance, "Every ticket is a weapon fighting that guy, fighting that bastard and fighting all the bastards!"

The same is true of Paulson's "Because I Have to Tell Someone" (from May, according to the title card), a true rant about reaching the end of empathy with family members spewing Fox News propaganda as if it were gospel.

The aesthetics capture the virtual quarantine vibe, introducing us to "Mindful Meditations with Clarissa" with the host sitting in front of a green screen upon a which the image of a field carpeted with pink cosmos is projected, rolling out behind her like those sleep-inducing poppies in "The Wizard of Oz." But when her aura of calm shatters and Paulson launches into her diatribe, one almost aches for the call-and-response energy of a live crowds to temper the bitterness.

Rudnick's efforts to evolve "Coastal Elites" from a live stage production a montage of quarantine solo performances for HBO are apparent even so, and the actors' handle that pivot as expertly as one can. But in making this necessary transition the casualty is the sense of commiseration a "Coastal Elites" audience might have gotten from being in the company of likeminded souls indulging in an evening of theater.

But this version of the production has the unintentional side effect of highlighting our separation at a time when so many of us crave togetherness. In moments like these, absorbing a dramatized reminder of why they hate us regardless of what we drive, drink or wear maybe the last experience any of us needs. It might as well be a front row ticket to more exhaustion, the loneliest show in all the world.