From Edmund Burke to Mr. Burns: In the age of Trump, conservative thought has died at last

Conservatism once had a coherent philosophy. After the neocons, the bigots and the neo-fascists, nothing's left 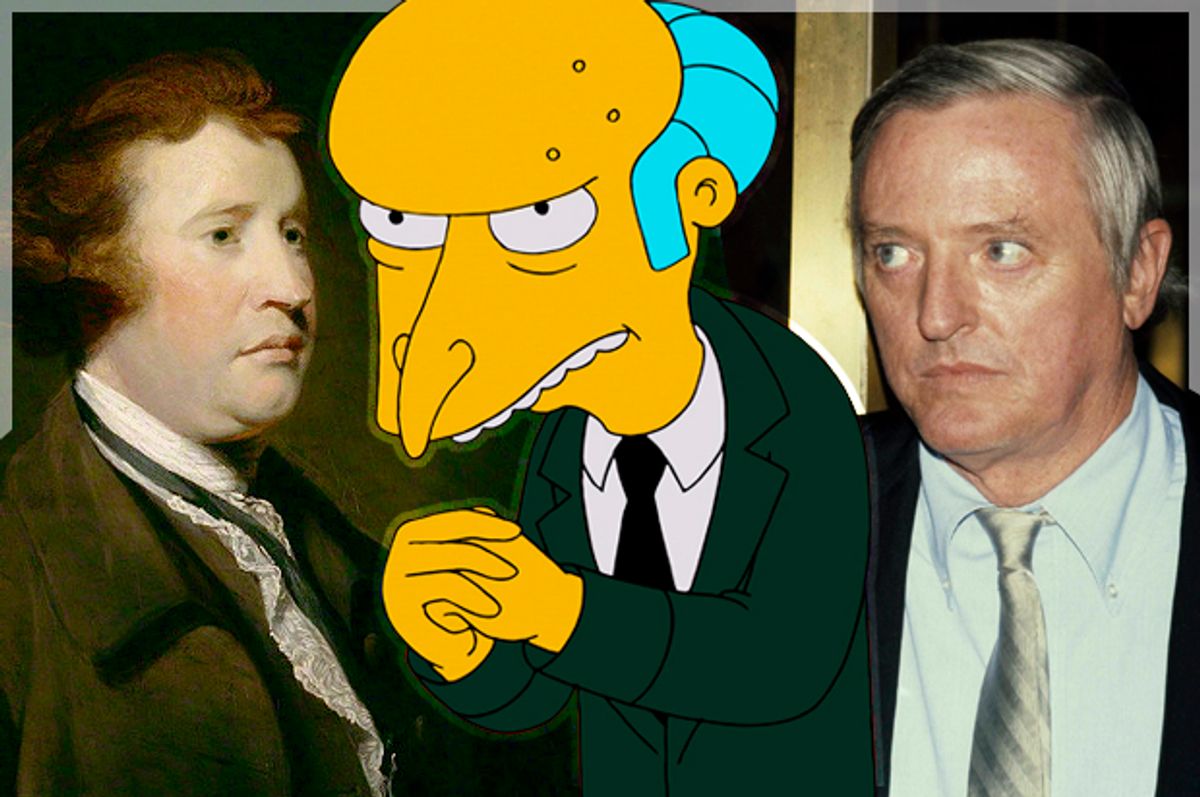 One way to understand what we are witnessing, amid the national humiliation of Donald Trump’s presidency, is to see it as the total collapse of conservative ideology. That might seem like a strange claim in a year when the far right seems ascendant throughout the Western world, and when the Republican Party nominally controls the White House and both houses of Congress for the first time in a decade. But I think it’s accurate, and all the breathless Ayn Rand fanfics hidden away in the hard drive of Paul Ryan’s Windows Vista PC don’t make it less so. (It does not follow, by the way, that “liberal” ideology is in such great shape either, and the two phenomena are not unconnected. Topic for another time!)

As a political force, American conservative movement has been morally and philosophically bankrupt for decades, which is one of the big reasons we are where we are right now. Largely in the interest of preserving their own power and empowering a massive money-grab by the class they represent, Republicans have cobbled together cynical coalitions by trying to appease multiple constituencies with competing and often contradictory interests: Libertarians, the Christian right, the post-industrial white working class, finance capital and the billionaire caste. Those groups have literally nothing in common beyond a shared antipathy for … well, for something that cannot be precisely defined. They don’t like the idea of post-1960s Volvo-driving, latte-drinking liberal bicoastal cosmopolitanism, that much is for sure. But the specific things they hate about it are not the same, and the goals they seek are mutually incompatible and largely unachievable.

But behind that political devolution lies the ideological implosion that's been coming a long time, longer than I can possibly summarize here. It’s safe to say that Edmund Burke and Alexander Hamilton, two 18th-century titans the modern conservative movement likes to cite as forebears, would be horrified by the limited, narrow-minded and intellectually inflexible nature of so-called conservative thought in the 21st century. How those guys would make sense of the fact that supposedly intelligent people who claim to share their lineage have hitched their wagons to the idiocy, mendacity and delusional thinking of the would-be autocrat in the White House — an implausible caricature of the stupefied mob democracy Burke and Hamilton hated and feared — I can’t begin to imagine.

Even so, the final stages of the collapse have arrived with startling suddenness. Just a few decades ago, William F. Buckley successfully appointed himself as the intellectual standard-bearer of the American right, in large part by purging overt white supremacists and conspiracy-minded ultra-nationalists from the mainstream conservative movement. Buckley was a slippery and devious character, and despite his command of classical languages and all that, was more like a guy who plays a first-rate intellect on TV than the real thing. Arguably his decision to drive the troglodytes from the temple was more a matter of political strategy than moral principle (although I believe he was genuinely ashamed of his early embrace of segregation).

In any event, racism, anti-Semitism, xenophobia and other forms of paranoid thought were never absent from American conservatism -- as in the "Southern strategy" that got Richard Nixon elected in 1968, and made a big comeback during the great renaissance of the Reagan revolution. Those who expressed such views were expected to keep it clean, so to speak, and to observe rhetorical limits. Ben Carson and Clarence Thomas were welcomed at the country club; Klansmen and neo-Nazis and guys who handed out homemade brochures set in 8-point type about the Bilderberg Group were exiled to the strip mall. Immigration, always the great rift in conservative politics, was politely and pointedly ignored, like the ripping fart laid by the bank president’s wife at her garden party.

It couldn’t last, and it didn’t: The grand bargain the Republican elite thought it had struck with the loonier fringes of the lumpenproletariat came undone in spectacular fashion in 2016. Donald Trump and his pitchfork brigade stormed the country club, chugged all the Pinot Grigio straight from the bottle and then barfed it up on the imitation Persian carpets. Blowhard bigot Steve Bannon is running strategy for the White House, while his crony Stephen Miller -- variously compared by late-night TV hosts to "Sméagol in a suit" or a younger Montgomery Burns -- dispenses outrageous lies on the president's behalf.

What's left of the conservative intelligentsia is either whimpering in the corner alongside New York Times columnist David Brooks or groveling before its new overlords and swearing eternal fealty. Either way, it’s pathetic. Buckley may have been an erudite con artist to a large extent, but he had a coherent worldview, avoided telling outright falsehoods and would genially have agreed that there were some good things about the Enlightenment, and perhaps even about postwar American culture. It’s a long slippery ride downhill from him to this dude, the leading intellectual apologist for the Trumpian counterrevolution.

I don’t know about you, but when I encounter someone with an expensive education who ought to know better using the term “my people” with no clear point of reference — he does not mean, say, the general population of the United States — I can almost hear the singing and see the flickering torchlight. As Molly Ivins once observed about a famous 1992 speech by Pat Buchanan (which I witnessed live, from the floor of the Republican convention in Houston), that probably read better in the original German.

That’s the climactic passage from “The Flight 93 Election,” a now-infamous viral essay by Michael Anton, a onetime George W. Bush speechwriter who has more recently been hired as a policy aide by Trump’s National Security Council. Anton published it in September under the pseudonym Publius Decius Mus, a reference so obscure and self-aggrandizing that even Buckley would have found it unbelievably pompous. (The historical Decius was a Roman consul who supposedly sacrificed himself for his troops — and, of course, for the empire.)

Several things strike me about the “Flight 93” essay, the first of them being its sheer propagandistic balls-out bogosity. Anton is a compelling prose stylist in a distinctively contemporary vein: He can turn a phrase and establish a rhythm, is not averse to pop-culture references and Internet-speak, and can deploy big words without getting in over his head. But his arguments are based in shameless Trumpian bullshit; I may be kidding myself, but I don’t believe Buckley would ever have descended to such a torrent of lies. In Anton’s imaginary universe of September 2016, crime was “way, way up” and “rising fast,” the economy was in ruins, Hillary wanted to admit “a million more Syrians” and America was about to be swamped in “a tsunami of leftism” that would unleash “vindictive persecution against resistance and dissent.”

None of that is remotely related to reality, and Anton certainly knows it. What is startling for a leftist reader is the fact that roughly one-third of Anton’s arguments correspond closely to those of, say, Bernie Sanders, as when he excoriates “the sophists of the Davoisie oligarchy” (i.e., the neoliberals) who rationalize “lower wages, outsourcing, de-industrialization, and endless, pointless, winless war.”

On the other hand, like nearly all right-wingers Anton has an enormous blind spot that prevents him from perceiving any difference between mainstream liberalism and “the left.” It’s almost hilarious to envision a world in which Hillary Clinton, of all people — the most conservative and most nationalistic Democratic presidential nominee since approximately forever (since Al Smith? Since Woodrow Wilson?) — could be successfully depicted as a socialist-feminist dictator in waiting. Since that world was our actual world last fall, it isn’t funny at all.

Or maybe he’s just pretending to think that Clinton was Trotsky in a pantsuit. Anton is no neocon, but he speaks and understands the neocon code. As a former Bush administration employee he is almost certainly an apostate to the neocon worldview, which is internationalist and imperialist, enthusiastic about free trade and agnostic on immigration, and eager to minimize religious and racial conflict. (If you haven't noticed those are all things about recent conservatism that the Trump movement forcefully rejects.) One could plausibly say that it is the remnants of the neocon old guard, like John McCain, Lindsey Graham and their allies in the CIA, who are fighting a last-ditch counterinsurgency against the Trumpian takeover of conservatism.

I would speculate that Anton's Göbbels-scale lies about virtually everything, although their substance is borrowed from Trump and Bannon, have their ideological roots in the neo-Platonist scare-gospel of Leo Strauss. That legendary University of Chicago political philosopher taught generations of young neocons that selling falsehoods to a gullible public in service to a noble cause is not merely defensible but necessary.

Anton’s gullible public, however, is his fellow conservative intellectuals. He is trying to convince them that their cause is lost and it’s time to try something new. Like most liars, salesmen and writers, he gets carried away by the force of his own rhetoric and reveals more than he means to. The gist of “The Flight 93 Election” is only partly that America faces an invasion of transgender P.C. Islamic terrorism and, like him or not, Donald Trump represents our last chance to eat non-Sharia, non-Communist apple pie without kale mixed into it and chai poured on top of it. Anton himself admits that conservatives say that every four years, and it’s never quite true.

His real point is that conservatism has failed — that the entire 200-odd-year tradition of strategic counterattack against revolution that began with Burke, and was designed to preserve as much power and privilege as possible and carve out a middle way between too much autocracy and too much democracy, has arrived at a dead end. Those on the right who accepted the pre-Trumpian status quo, even if they complained about it, Anton says, had “implicitly admitted that conservatism is wrong. Wrong philosophically, wrong on human nature, wrong on the nature of politics, and wrong in its policy prescriptions.”

Is he trolling his fellow so-called conservatives, or trolling himself? That passage feels to me like a mea culpa and an act of repentance. Anton's solution to this impasse, needless to say, is not for conservatives to go back to first principles and recover the analytical, conciliatory and pragmatic spirit of Burke. He mocks the Burkean tradition once by name, and several times by implication, which is something like a priest denouncing the pope. Conservatism is wrong; Anton wants “his people” to live, and he sees that life made possible through in a unique revolutionary leader, an “alleged buffoon” who is “more prudent — more practically wise” than all those who opposed him. In other words, he wants conservatives to abandon their failed ideology and embrace a new one. That one has a name too, and many people on the American right were positively aching for it.