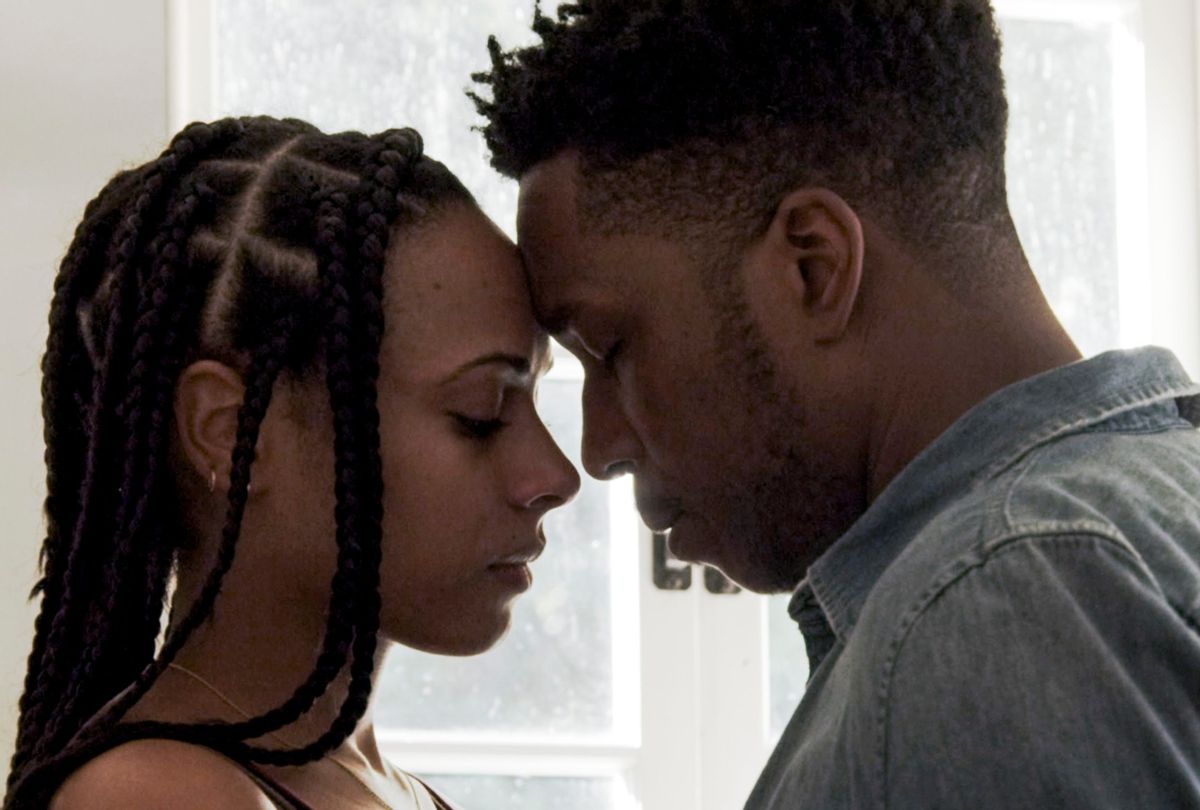 Nicolette Robinson and Leslie Odom Jr. in "Love in the Time of Corona" (Freeform)
--

"Quarantine pick-up lines are the worst," declares a lonely heart on "Love in the Time of Corona."

Quarantine TV shows aren't much better, if we're using this show as an example of what to expect.

But we're in the early days of this process of negotiating how TV is going to move forward in this socially distanced era, even though some of us feel like we've been suspended in this uncertain limbo forever. Freeform's four-part limited series is merely one attempt, and certainly not indicative of the shape every COVID-cautious production may take.

Looking at it purely on the merits of its execution, it at least proves that it's possible to pull off a decent-looking drama about a topic so near and dear to many of us that we're living inside of it. That factor also explains why this series doesn't quite work.

That "Love in the Time of Corona" seeks to address the very pertinent question of how we're supposed to create and maintain interpersonal connections at a time when our very lives depend on staying apart would seem to make it a natural draw. Somewhere out there somebody is furiously developing a "Love Actually"-style anthology guaranteed to delight and melt hearts and maybe even recreate some version of Andrew Lincoln's adorable cue-card confession.

This is not that project. This is an experiment sent straight to series at the beginning of May with a production that began at the end of June. Hasty creations aren't necessarily terrible; in the right hands they can be brilliant.

Such creatives might also know that when being tasked to create in the middle of a natural disaster when everyone is flying blind, attempting to successfully illuminate that blindness is a fool's errand. Society itself is in the midst of a realignment that could bend in any number of directions, one that's moving quickly enough for last week's intense conversations of the day to feel like like ancient history.

"Love in the Time of Corona," created by "Good Trouble" executive producer Joanna Johnson, is nothing if not a collection of those old exchanges, annoyingly peppered with groan-worthy Gen Z outbursts about checking privilege. Freeform's audience skews younger, but if I'm cringing at some of these messaging moments I have to believe that viewers hailing from a couple of generations behind me may get a headache from all the eye-rolling.

The good news is there's something in within its four short episodes for everyone, designed to speak to a variety of quarantine conundrums. Real-life couple Gil Bellows and Rya Kihlstedt  play Paul and Sarah, a couple recently separated before quarantine hit who haven't yet broken the news to their daughter Sophie (Ava Bellows). When she returns home from college to shelter in place with them, they have some decisions to make.

"Hamilton" star Leslie Odom Jr. and his wife Nicolette Robinson portray a film producer named James and his wife Sade, who are contemplating getting pregnant . . . until James watches video of Ahmaud Arbery being hunted down in Georgia.

"Lost" star L Scott Caldwell portrays Nanda, an elderly woman forced to be apart from her husband (Charles Robinson), who is in an assisted living facility and struggling with dementia, while roommates and too-close besties Elle (Rainey Qualley) and Oscar (Tommy Dorfman) deal with their horniness and boredom by journeying into the weird wilderness of Zoom dating.

Situations portrayed in each of these stories make a mighty attempt at being about a hot topic some segment of the audience is living, which entirely misses the point of any diversionary activity. We're all feeling our way through this fog slowly and clumsily, and the one of the last things most of us want to do is watch four earnest dramatizations of people who are also feeling their way through this fog and failing at it.

In normal times that precise quality could have made this series a worthy exercise in commiseration, but the scripts aren't witty or exciting enough to make us want to relate to these characters, none of whom is compelling enough to make a person want to stick around.

"Love in the Time of Corona" does provide an important lesson in what not to do – a lesson that comes too late for the likes of HBO's upcoming celebrity one-off "Coastal Elites" while also highlighting the ways that HBO Max's "Selena + Chef" is onto something.

"Coastal Elites" is more tongue-in-cheek and a shorter time commitment, and benefits from the celebrity glow-up provided by Bette Midler, Sarah Paulson, Kaitlyn Dever, Dan Levy and Issa Rae. The Paul Rudnick-scripted, Jay Roach-directed project was supposed to be a monologue-driven live event to be filmed over three nights at Manhattan's Public Theater but, well, we know what happened.

Instead the monologues are being served up from the cast's homes with limited crews to film them, and to Rudnick's credit, the stories aren't about life in the time of the 'rona. Each one is about . . . life under the thumb of Donald Trump, which presents its own hurdle for audiences to clear.

"Selena + Chef," however, is about the very likable Selena Gomez receiving cooking lessons from world-class chefs – this week's being Roy Choi – over a remote connection. She's at home, they're at home, and she says, "We're gonna see if we can make a meal together, apart."

Gomez's series isn't necessarily a cooking tutorial (although you can pick up a few tips!) as much as it's a cathartic and lighthearted comedy gently inviting the audience to relate to the daunting task of learning something new. The pop star is refreshingly down to earth and adventurous, and she succeeds and flubs the dishes with equal enthusiasm.

Above all, the show is a funny experiential departure from the low-grade angst clouding our existence, which is TV's main role in this time.

People may find something to connect with in "Love in the Time of Corona," and it's short enough for someone to commit to view it in its entirety without losing much time to it. But if one of the defining characteristics of this age is a radical reassessment of priorities, I find it difficult to conceive of how this series qualifies for our list of wants and needs.

But I'm guessing it'll be a very useful example for the creative staffs developing NBC's "Connecting," Netflix's "Social Distance" and other quarantine-themed series of what not to do in this crisis.