Superstar chefs teach on "Selena + Chef," a quarantine cooking show that looks like no other 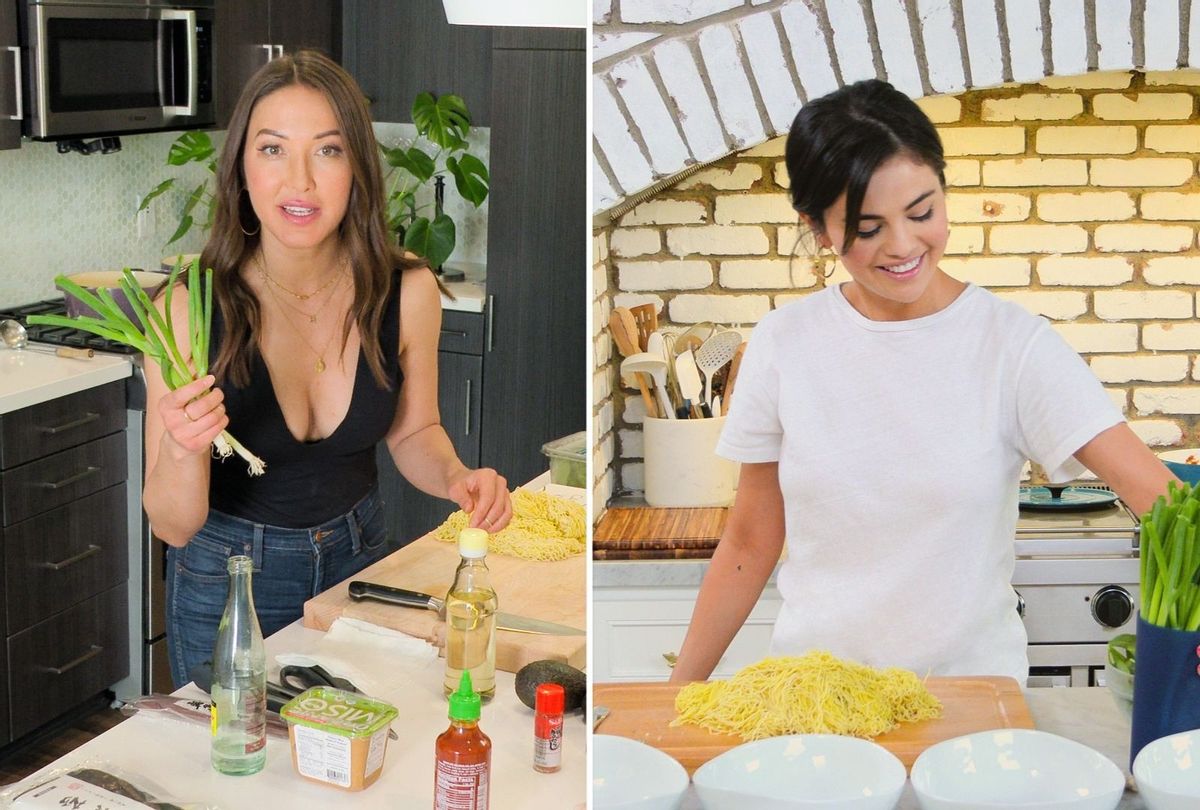 In the opening of her new unscripted HBO Max series "Selena +Chef," musician, actress and TV producer Selena Gomez remarks, "I really love to eat, but I'm not the best cook." Many of us probably have come to a similar conclusion since the beginning of the pandemic, as nights out have been replaced with endless evenings in.

But this isn't your typical cooking series. "Selena + Chef" was conceived and produced while all the talent was completely in quarantine. The chefs filmed themselves in their own kitchens, while Gomez filmed herself in her own (with a little help from her housemates and grandparents, with whom she is in quarantine).

It's similar in concept to other home cooking shows that celebrities have executed themselves during the pandemic, like Alton Brown's "Quarantine Quitchen," the self-shot "Amy Schumer Learns to Cook," and Iliza Schlesinger's "Don't Panic Pantry," but is the first quarantine cooking show produced by major network.

"This was very, very different — different than anything I've ever done in my career or that my production company had ever attempted," executive producer Aaron Saidman told Salon. "It was our first COVID production."

Saidman, who is known for his work on numerous reality and nonfiction series ranging from "American Idol" to "Indian Matchmaking," discussed the challenges of creating a show in the middle of a pandemic and Gomez's desire to present an authentic cooking experience — kitchen fires and all.

What sparked the idea for the series?

This was early days for the quarantine and sheltering in place in California. Like the rest of us, Selena found herself at home more than ever and found herself in the kitchen, specifically, more than she ever thought and developed a desire to know how to be better in the kitchen and to make healthy, delicious meals.

And by her own admission, she's not necessarily an expert in the kitchen. You know, she is amazing at many, many things. She is a genuine talent in so many areas, but I wouldn't say the kitchen is one of them. I think she would agree. So there seemed to be a genuine need and something was certainly born from COVID and from all of our being at home.

It turned into something where the viewer would get takeaways themselves about how to make these meals and something where Selena could be completely disarming, unfiltered, unrehearsed and unscripted — just be herself in the kitchen learning from these expert chefs.

So on one hand, there is nothing terribly funny about COVID, of course; on the other hand, this is escapist fare, if you will. She is having a lot of fun making these meals and getting this expert advice. And if the goal for the viewer is to have fun with her and go on that journey with her — either vicariously or in trying to make those meals yourself — you can absolutely do that. Or if you just want to watch a fun cooking show with Selena Gomez, I think it works in that regard as well.

Right — and that's something I want to return to in just a moment. But can we pull back and talk about some of the realities of producing a show in the quarantine. You've served as a producer on a ton of different reality and nonfiction series. Could you explain how the filming of this show was different than your average television show?

Well, this was very, very different — different than anything I've ever done in my career or that my production company had ever attempted. It was our first COVID production. So, rule one was "do no harm and put no one in harm's way." So safety I think was paramount across the board. Not just for Selena's safety, I should add, everyone's safety.

That was our number one priority. You know, people's health and safety is way more important than any single television show.

So the task was, can we do something fun and entertaining, but completely safe with brand new protocols that we had never implemented before? And I can bore you with some of the details . . .

So intrinsic to the conceit of the show is that, of course, Selena is in her kitchen in her own home with the other people that are sheltering in place with her, and we didn't want to compromise that area. So we went in, we sanitized everything when she wasn't in her kitchen. A crew rigged all of the remote cameras — and there are many — that we set up in and around her kitchen. Then we sent a crew back in to do further sanitizing and then we left. No one was ever in the kitchen space with Selena.

Once we did that setup, we remotely showed Selena how to turn on all the cameras and were able to remotely check to make sure everything was technically working. From there we proceed to produce the show from outside with a crew of 10 people or less. There were never more than 10 total people outside her house.

Everyone was socially distanced six or more feet apart from the next crew member, you had your own pre-packaged craft services, your own masks, your temperature was taken when you showed up to set and then periodically throughout the day.

Selena did her own hair and makeup — people may be surprised to learn that. I think she did a great job.

For sure, I definitely bookmarked the makeup look in the second episode for future reference.

You know, hire Selena Gomez right here to do your hair and makeup. Another talent that we now know she possesses.

There are 10 episodes, 10 chefs. It's a really robust mix. We've got several "Top Chef" alums, some big names like Roy Choi and Nancy Silverton. What were the conversations about who to choose like?

Because we had developed a pretty sophisticated remote filming system, I — I'm getting off on a tangent, but I hope when people watch this show, they aren't watching it and thinking, "Oh, that's pretty good for remote production." I hope they don't think about it at all because it's seamless.

But as a result of setting up remote cameras in Selena's home and in the chefs' homes, and due to the tight timetable we ramped up and had to shoot this in, we did not go outside of LA for chef casting. Thankfully, in the Los Angeles area, there are a lot of brilliant, amazingly talented chefs in the pool for the casting of the chefs.

Our hope is that in future seasons, we can expand that and obviously film with great chefs in other cities. We just wanted to make sure that the remote production would work and now that we have achieved that and are confident in the results, we are looking to expand to New York and some other great culinary destinations to include more chefs. 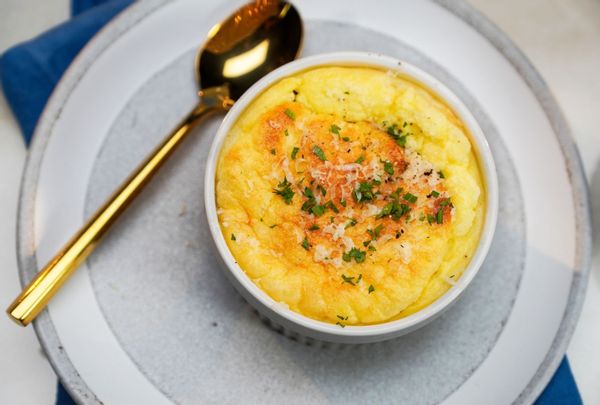 I wanted to ask as well about the dishes featured as well. You know, I write about food, I'm a decent home cook, but when I saw stuff like making a souffle or breaking down a whole octopus on the docket, I got a little nervous. But "Selena + Chef" made it feel accessible. Was accessibility one of the goals of the show?

Accessibility was a very important goal of the production, that is accurate to say. It's a careful balance. We wanted people to feel like they could make these dishes, but we also wanted to do some interesting stuff that pushed those limitations just a little bit.

You know, I'm not sure that I necessarily feel comfortable grabbing a raw octopus, throwing it down on a cutting board and chopping its head off, but seeing Selena doing it made me feel like that was actually possible if I just follow the instructions and the steps.

On one hand, you want it to feel incredibly accessible for the viewer and you want it to be something that Selena herself felt like she could reasonably pull off, but you also want to do fun, interesting things that you might not otherwise do. If you have a group of master chefs teaching you how to cook, you want to take advantage of that. You don't necessarily just want to make a peanut butter and jelly sandwich.

Well and when pushing limits, obviously, sometimes mistakes happen, and that was a really humanizing element of the show. It kind of reminded me of Julia Child on "The French Chef." She would mess things up, but then would show us how to fix them if possible. We see a few mistakes on the show, like when Selena almost starts a little kitchen fire or undercooks a souffle — why did you all opt to keep those in the final edit?

Thank you for asking that question and for noticing that, because it was so important to the creative of this series. You know, Selena genuinely wanted to learn how to make this stuff and again, by her own admission, is not an expert in the kitchen. We didn't want to gloss over any mistakes or trial and error that happens when the rest of us are in the kitchen trying to cook at home without any cameras on us. We wanted to reflect the realities of cooking at home, an authentic home cooking series.

It's really what it was, and Selena was very gracious in allowing her flaws in the kitchen to be on display. I do think it's a really humanizing element of the series and should hopefully make the viewer feel more comfortable getting into the kitchen and experiencing the goal of trying to make these dishes.

We didn't hire what you would call culinary producers, right? Where everything is pre-planned — the perfect amount of onion is diced up and put in the perfect little glass dish right in front of your refrigerator when it's time to open it up and grab it.

That's precisely what we didn't want to do. We wanted to do something that showed the authentic experience of what it's like to not be a master chef in the kitchen and to actually make these meals. It goes back to the show being unrehearsed, unfiltered and truly unscripted. 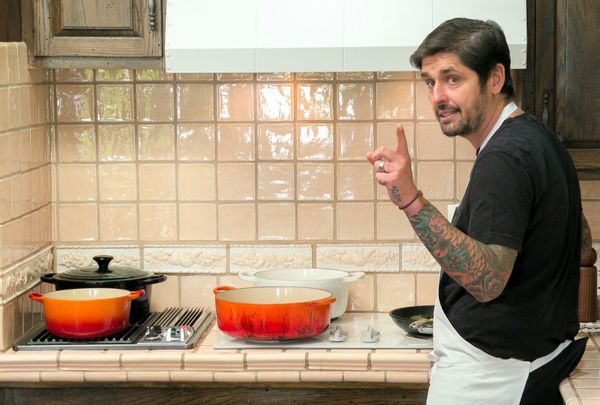 I also feel like we as viewers learn a lot from that element of the show. For example, the wet towel trick that Ludo [Lefebvre] shared to help reshape your omelet was a game-changer for me. Did you learn anything from the show that you think you'll take into your home kitchen?

Well, I will admit that I am not a cook and I am almost definitely a worse cook than Selena. So I have a learning curve that will be steep. I feel like with enough patience and by carefully following the instructions, I can — at some point — nail Roy Choi's Korean barbecue breakfast taco.

What I can tell you is, we had a great experience. That's the truth. Selena, the producers, the whole crew. We had a wonderful time making this show and we think that it's something special and fun for the viewer. We're excited to bring that to them because it was such a positive experience and we're certainly eager and looking forward to doing more.

The first three episodes of "Selena + Chef" are now available on HBO Max.