The team behind the movie "Chef" gets back in the kitchen 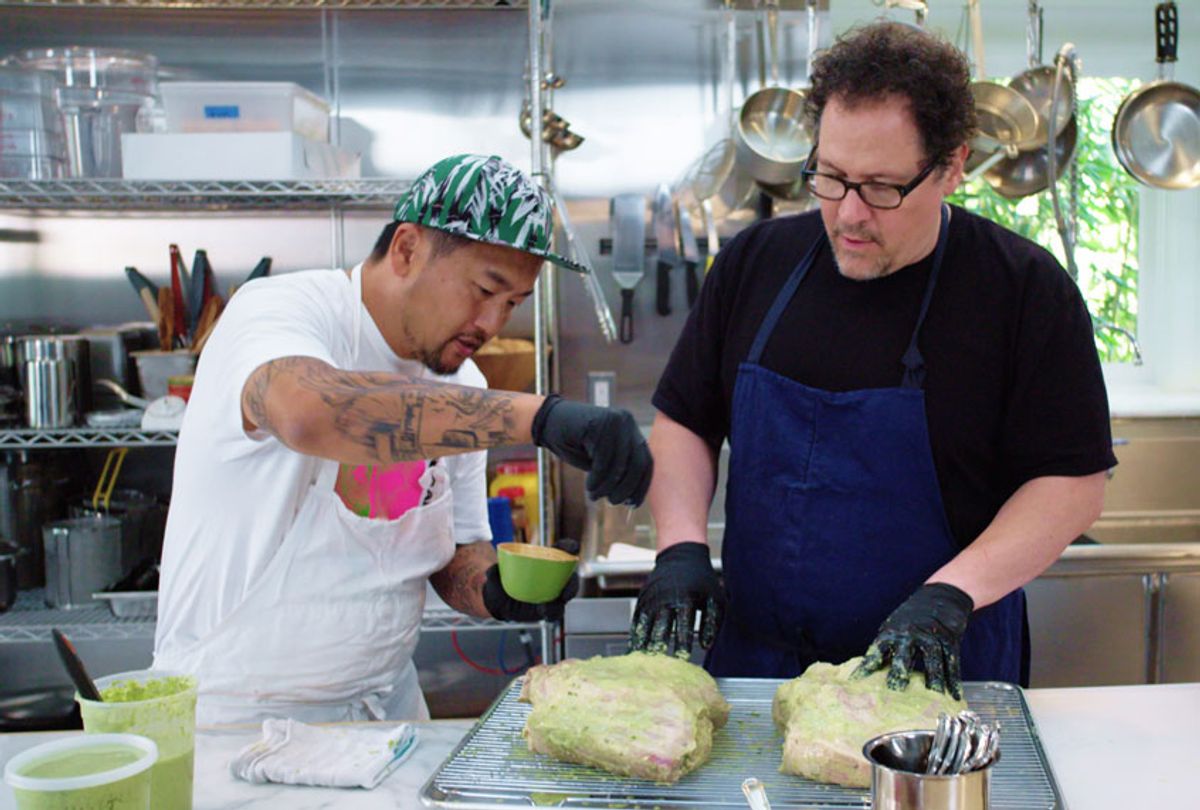 The band's getting back together. Five years after Jon Favreau's labor of love sleeper hit "Chef," the "Iron Man" director decided to take some off from making blockbusters (his live action revamp of "The Lion King" opens next month) to return to the kitchen with his culinary collaborator and buddy Roy Choi. In the Netflix series "The Chef Show," Choi, who practically single-handedly started the food truck revolution with his acclaimed Los Angeles outpost Kogi, is an amiable friend and foil for his eager apprentice Favreau. Over the course of seven episodes, Favreau and Choi team up to do . . . pretty much whatever they want, from making pepper pot with Gwyneth Paltrow to eating oysters with Tom Holland. The result is a cooking show that's also a talk show that feels like a weekend dinner party with your pals. Salon spoke to Choi recently about "The Chef Show," and translating the food truck ethos into binge-worthy television.

It's been five years since the movie. Why this series? Why now? It seems like you guys just really missed each other.

Clearly. Whatever we did next together, whether it was making a sequel or building a restaurant or starting a food brand or doing a show, we just didn't want it to be forced. It just took some time to figure out what that was going to be.

We remained friends, but it was kind of like we had moved to different cities. It wasn't a long distance relationship, but that's the best analogy I can give. We wanted something to pull us back closer together, [but] we didn't really work on it that much.

Jon was filming in Atlanta for Marvel, and out of the blue called me. He's like, "Listen, you know what? I have this idea. I have a couple cameras. Why don't you fly out here and we'll start cooking? The actors, they all have a little bit of free time, and we'll just cook for them, go to a couple of restaurants, and let's just see if there's anything there." That's really how it all started.

It feels to me like the food show equivalent of a food truck. It's just laid back. It's improvisational. It feels really unfussy and casual.

That's a great example. Like musicians who play big arenas, this is like an opportunity to work out material and have fun, to get back to the core of the art form and play small clubs. That's what this felt like. We would just pick the topic like barbecue or Italian food or some food from the movie ["Chef'] and bring that to life. Let's break the fourth wall, pull it into reality, but also then have it evolve into, "What are you eating? What are you in to right now? Do you ever want to learn how to make something?"

You do a range, from really simple beignets from of a mix to a brisket that will take you the rest of your life to learn how to perfect. It's a gamut of different things, and it does feel there is a through line that is just, "What am I excited about?"

That's really it. Because as a chef, I really don't cook out of the box as much. But because Jon's a home cook, he was more comfortable with that. For me, when it says to just add water, I get crazy anxiety. What? No, there's got to be more. Jon was like, "No, you just add water." That was a nice little redirection of him teaching me. That was all natural, it was fun. And then we go into things like barbecue, going down a road that will be a lifelong journey, and showing that you can make mistakes and have fun.

The other through line is that you talk about food writing and food as storytelling. That's obviously something that you feel strongly about, particularly Los Angeles food and Los Angeles food writing, culture and small businesses. Like a lot of people in the industry, you came to it a little later, discovered cooking almost accidentally. This is your way of telling your story in the world.

Through this show and being around Jon, I continue to learn how to be a storyteller, but I can never be a performer. Even as a kid I wasn't like a natural entertainer, where I would gather everyone around me and then sing or something family parties. I'm a quiet person in real life. But being around Jon has allowed me to find my own lane, my own way to tell stories through the recipes, through the food and him leading me and helping me just kind of let go and start talking.

When you're not a pro in front of the camera, you make a lot of mistakes, and I learned all this when I was watching all the editing. I have a tendency to trail off in conversations. I don't look up at people sometimes when I talk or cook, and those are all pretty bad no-no's being in front of the camera. I r learned all that and learned it in a very organic way of not having to put on this crazy caricature of myself. My story was told not even through words, just through our interaction.

You are someone who grew up watching cooking shows and love cooking shows. Now you have two food shows this year. (Choi is also the host of the PBS sustainability-themed "Broken Bread.") They're very different shows and very different messages. Maybe you didn't know growing up that you wanted to be a chef, but clearly there was some part of you that was really relating to television chefs.

I grew up in LA. A lot of my friend's mothers and parents worked at Paramount Studios, so I would always go. I met the Fonz when I was really young, like four or five years old. I was always around people in entertainment all the time throughout my whole life. had this natural, Forrest Gump nature of always being in the right place at the right time. Then I moved into being a chef and I worked at the Beverly Hilton, so I was always exposed to it.

But at the same time, I myself wasn't a celebrity. The two shows reflect my life. On one end, I'm very comfortable around any entertainer or any celebrity; I have one foot in that world. Then also, I have a foot in social activism and I'm very comfortable on the streets, on the ground, in grassroots movements and working behind the scenes. The shows really reflect the two parallels in my life, being on a the street corner one minute and then being at the table with Iron Man and Spiderman the next minute.

We're really having this golden moment right now with food programs and food television. What is it that just draws us, as viewers, to this very meditative experience of just watching other people prepare food?

I don't have the psychoanalytic answer to it, but I think it's not like watching a rock band play for three hours in a documentary. You don't get that same feeling, because it seems so far away from your life in a way. You're a fan and then they're a rock star. There's that huge separation, and it's something that, in a way, you know you'll never become. It's not something that happens normally in your life everyday, where 60,000 people are cheering you on. That happens to a very few amount of people in the human race.

Cooking is something we all do. We're all not good at it. But watching it, you get that little sense of confidence, like, "I could do that." Or, "I understand that." And it feeds you in a way, just like real food. It feeds you while you're watching it. I think that's the meditative part. It's not hitting our front brain or our conscious brain, but it's hitting our subconscious, and it's feeding us. And there's just something very personal about it.

There's also the progress of it. You start at one point and you usually end at another point that you all agreed on and then as you watch it, you get there. Because there's so much un-completeness in our world, watching a cooking show closes the circle.

I really love it, in this show, because it's essentially an honest, heartfelt food truck of a show, as you say. I know it doesn't seem like a huge gamble, but it was because we didn't want to put that many bells and whistles on it. We wanted it really just to be that. Sometimes on TV now with all the sources of information and content out there, we convince ourselves maybe that's not enough. Maybe you've got to keep adding on. But sometimes, sometimes simple is enough. That's what we try to show on the show. Cooking has a lot of time. The pie has to go in the oven. It has to cook for twenty minutes. You have to clean up and you have to organize and get ready for it. And there's just moments where you pour each other a drink and just talk. Those natural moments, those are the moments I love, where you don't have to say anything. It's like we're hanging out. And we just chill it.

This conversation has been lightly edited and condensed for clarity.