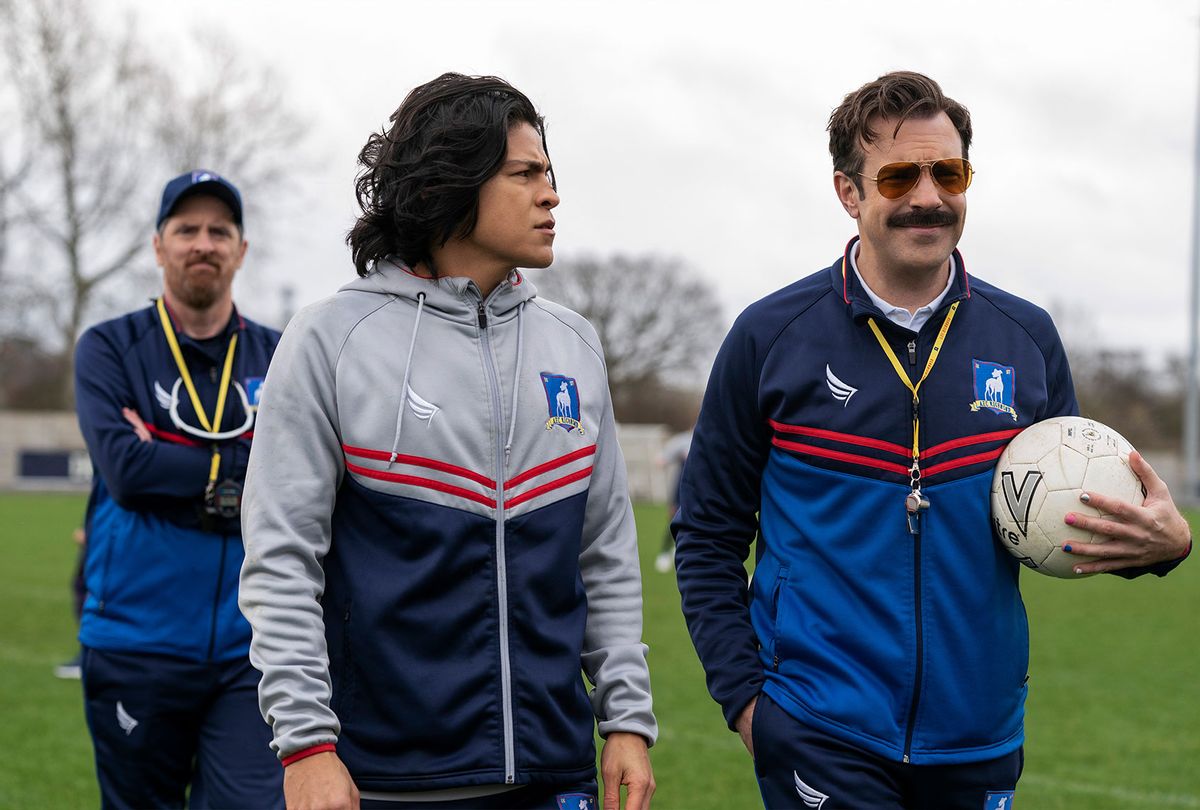 Hard as this may be to believe, there are actually people in this world who don't love "Ted Lasso."

It's true! These people aren't monsters, either. I've met some of them. Others I know quite well. Look . . . I get it. In a cynical world sincerity is the toughest sell, especially the kind that is scripted and portrayed confidently and competently by a cast that wholeheartedly believes its mission. The actual story about a struggling soccer team is massively appealing by itself, but the larger metaphor about human potential is what gives the show its magic.

"Ted Lasso" humbly came on the scene as an excellent show about goodness and remains so in its second season. Scratch that – it improves upon everything that was wonderful about the first by relieving Coach Lasso (Jason Sudeikis) of his self-assigned role as his team's main wisdom-broker, peacemaker and positivity beacon, allowing other characters to carry those sparklers for him.

Nevertheless, Ted clings tightly to his upbeat nature with such tenacity that his hands shake, and at times the quivering is uncontrollable. We caught a glimpse of this in the first season with the sudden onset of a panic attack in the middle of team karaoke night, cued to the moment his boss Rebecca (Hannah Waddingham) hit the high notes in the refrain of "Let It Go" from the Disney film "Frozen."

That was too perfect for some folks, maybe. For those of us who have bought into The Lasso Way it could not have gone differently and hit us as powerfully.

That level of expectation could damn a show like this as it goes into its sophomore season, 20 Emmy nominations notwithstanding. The comedy's creative team obviously anticipated this, responding by amplifying every morsel of feel-good fuel while revealing some of the darkness growling behind its perfect sunshine. Uplift might be Ted Lasso's brand, but sorrow is the baseline that gives his story a symphonic heft.

Not many shows can maintain that emotional equilibrium over the long haul, but Sudeikis, Brendan Hunt (who plays Coach Beard), Bill Lawrence and Joe Kelly manage to incorporate the right dose of sadness into the story's warmth and sweetness without dragging down its energy.

The show returns on the heels of a racist controversy roiling the world of British sports, in which football players Jadon Sancho, Marcus Rashford and Bukayo Saka sustaining via social media attacks from fans following England's elimination from the Euro 2020 final.

Expecting a TV series to serve as the antidote to such vitriol is too much, frankly. But a show like this can set an example. Last year "Ted Lasso" dared the world to "believe." The phrase recurs in this new season is "do better," an adage that applies to AFC Richmond's game play and a plea to everyone watching its Cinderella story unfold.

The team's current season is a string of ties – no wins, no losses, nothing but draws. Teetering between definitive fates is frustrating unless you view it as the anticipatory cushion between where you are and someplace brighter. It's a good space for "Ted Lasso" to welcome folks back and reassure us that it's OK to have great expectations.

Layering the dialogue with fast-moving punchlines and crafty jokes ensures its thrusters keep firing with no stutters or stall-outs. Loading the team with lovable figures makes it impossible not to love at least somebody in this show.

There are also too many characters to adequately explore everyone's inner lives during the first round of episodes, granting Season 2 a number of unexplored mountains to map. That's a good thing. Ted and the show had to establish themselves and win over a pair of wary fanbases, that of AFC Richmond's football team and the TV audience. Each case took some time, as we know. Most converts found the first season months after it debuted.

In its second, the story has grown beyond that of Ted's outsider struggles. The team loves him. English football fans do too, even the ones who still call him "wanker." We know him, so the writers trust our familiarity with the sketched edges of everyone around him to broaden its focus on their lives and quirks.

Now it abides by this notion of Ted's: "I believe in communism…rom-communism!"

Our love of "Ted Lasso" was won through its relationships as opposed to leaning on the title character's personality. Oh, there's a lot to love about Ted, which is intentional on the part of the man playing him.

Sudeikis constructs Ted to be a man with a pathological need to be liked, which he feeds by persuading people to genuinely love him only after they figure out how to love themselves and those around them.  Operating this way convinces the team and the audience that no one is irredeemable, a message that struck a vein in late 2020 and early 2021 when so many people yearned for a little bit of light.

But the success of this show isn't strictly situational. This is classic Bill Lawrence gameplay at work here, with notes of "Scrubs" and "Cougar Town" relationship dynamics inspiring the most enchanting pairings and team-ups – seeds sown in the first season that bear fruit now.

Paths cross and join in unexpected ways in this new season, although the most successful pairings are ones we already know. The love between team brand manager Keeley (Juno Temple) and AFC Richmond veteran Roy Kent (Brett Goldstein) enrichens in a lovely way, but so does the friendship between Keeley and Rebecca . . . and Roy and a lot of other folks too.

Indeed, the second season showcases Roy, Keeley, Rebecca and Nathan (Nick Mohammed), the team's former kit man turned assistant coach, more than Ted – a welcome expansion, since we already have a sense at what's gnawing at Coach Lasso. But we're only beginning to learn what makes Roy tick, and Goldstein hams up his grumpiness in wonderful ways.

Waddingham's pleasure in Rebecca's pursuit of happiness and satisfaction is similarly palpable; she lends the character an incandescence not seen before (which, given the character's first season aches, makes sense). Mohammed shows variations in the meek, kindly Nathan one may not have thought possible. He and Phil Dunster's arrogant superstar Jamie Tartt show the ways that moving up in the world can change people.

Some folks are eternally locked into who and how they are, though. The awkward Higgins (Jeremy Swift) earns more respect and is taken more seriously, although a running gag through the eight episodes provided for review scrapes plenty of mileage out of his being displaced from his office.

That's because the team hires a psychologist, Dr. Sharon (Sarah Niles) to help the heretofore unsinkable Dani Rojas (Cristo Fernández) when he suddenly loses his signature cheerfulness, and no amount of Ted's all-American sweet corn can draw him out of his funk.

Sharon's counseling works, and other players flock to her for assistance . . . bringing out a side of Ted not seen before. You might recognize it as envy, at first. Soon it becomes something else.

Spreading the light around is a smart way for the writers to widen the show's narrative road while also coloring in the personalities of figures like Sam Obisanya, a player whose gentle brightness is accentuated by actor Toheeb Jimoh's charisma.

Season 2 broadens Sam's presence partly in a way that I'm not completely sold on, but aspects of his story that click are marvelous. The new season brings us closer to many of the players on the team, either through their own subplots or as part of a major character's, both is a natural progression for the story and a necessary one.

Sudeikis may blend in more readily with the ensemble but he's still the anchor, evident in scenes where Ted tosses aside his perky, can-do attitude and shows us the extent of his wounds. In those scenes we get a sense of his variability and range without him having to force it, and it changes our perception of Ted's vivacious twinkle.

In some respects that flaw helps a person to understand why some don't quite buy into the show's unapologetic optimism. Ted is corny and wise, guileless but not gullible, forgiving to everyone but himself. Above all, he's kind. These qualities ignited a passion in the show's faithful at a time when it felt like no spark in the universe could restart our flames. But a person must believe such humanity is possible before they can embrace the man who's preaching it.