As "Ted Lasso" returns, its rosy depiction of soccer contrasts with the sport's real-life racism

The depoliticization of sports is nothing new, from the acclaimed soccer comedy to the Tokyo Olympics 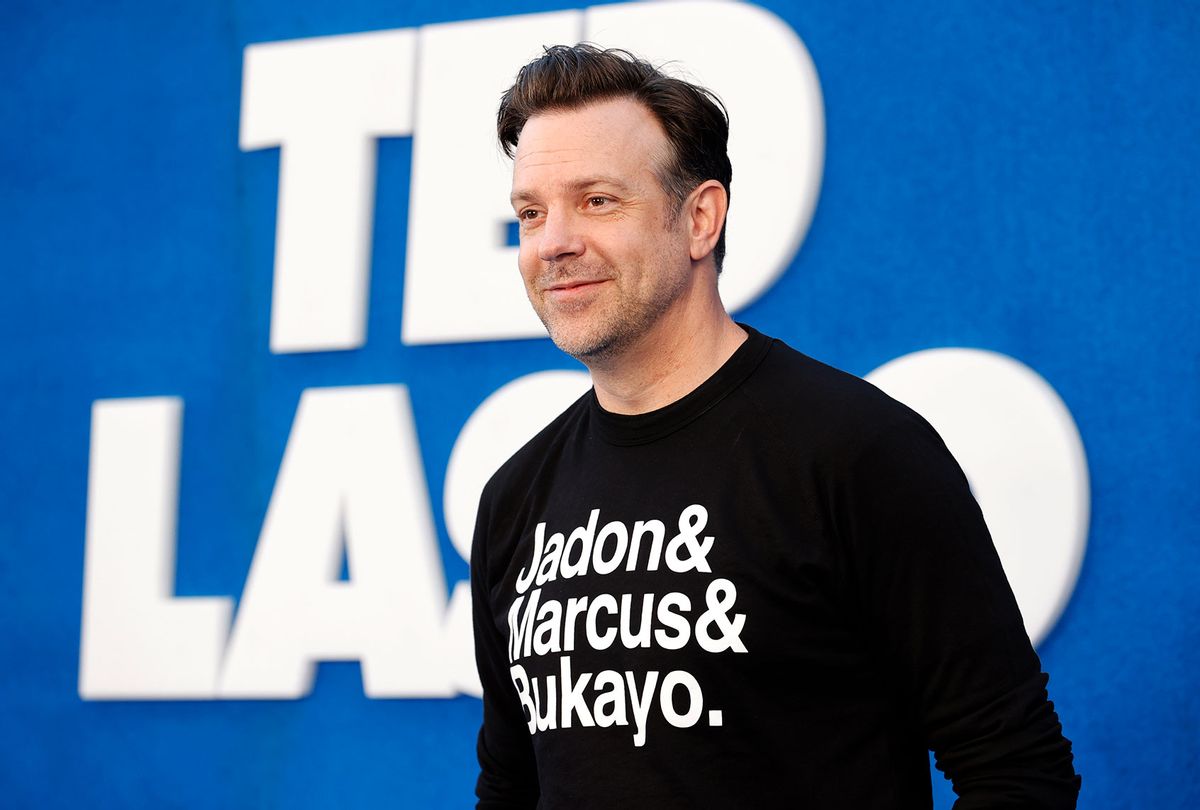 As beloved Apple TV+ comedy "Ted Lasso" celebrates its Season 2 return just one week after earning a whopping 20 Emmys nominations, the real-life English soccer world in which it's set is in turmoil.

The country has had to come to terms with the racism faced by their Black soccer players – including Bukayo Saka, Marcus Rashford, and Raheem Sterling. Like all athletes, they're beloved by fans when they play well, and torn to shreds on their off-days. But for Black athletes, like the Black players on England's men's team, these attacks from rabid, embittered "fans" take on the added dimension of racism and anti-Blackness.

Earlier this month, when Saka missed a critical kick for the English team against Italy for the Euro final, his social media accounts were flooded with monkey and banana emojis — a popular, white supremacist attack on Black people that dehumanizes and compares them to primates. Rashford also missed a penalty kick, and a mural depicting him was defaced with hateful messages. And while England had somewhat of an awakening during the Black Lives Matter protests in 2020, and again with the treatment of Meghan Markle, now one of its most popular sports is driving home that the country's racism cannot be remedied overnight or confined to just elites like the royals.

Meanwhile, "Ted Lasso" stars Jason Sudeikis in the title role as an American amateur football coach who is recruited to coach the English Premier League team, AFC Richmond – nevermind that he doesn't even know the rules for soccer. It's a fun, plucky show with the occasional piece of gender commentary with a dominant performance from Hannah Waddington as Rebbeca Welton, owner of the team.

AFC Richmond comprises a mix of players, including several Black players, from Great Britain and around the world. However, the charming series has largely shied from wading into the political and racial realities of the sport of soccer and the cultural milieu in England, a predominantly white country. Only once was there a hint of race acknowledged when Sam (Toheeb Jimoh), a player from Nigeria, returns a gift of a toy soldier to Ted Lasso, explaining, "I don't really have the same fondness for the American military that you do." Ted mumbles something about imperialism, and that's it.

But in light of recent events, the show can no longer hide from the racism of the real world. This was especially made clear when at a recent premiere event for the second season Sudeikis chose to wear a t-shirt in support of the English men's soccer team's Black players. When the show first premiered last year, many praised it for its bipartisan appeal simply because it eschewed politics. And yet comedy, like sports, can only serve as escapism for privileged people, shielding them from the real-life, violent bigotry they would rather ignore. For comedy and sports to have real impact, or serve real purpose, this requires uncomfortable, necessary conversations about identity and lived experience.

While "Ted Lasso" often includes rabid fans who call the team's optimistic coach a "wanker" or boo the occasional player, it's done in a lighthearted, even loving manner. It downplays the harsh reality of how the vitriol from fans often especially targets Black athletes as the perfect scapegoats for any kind of disappointing outcome. This mindset is one of entitlement — entitlement to the labor and victories of Black athletes, which "fans" claim as their own when things are good, and are quick to denounce once things go south. They have no real allegiance to their beloved teams' Black players, and see them instead merely as objects of entertainment, a means to a desired sports outcome.

Even prior to these attacks in response to the players' performances, the English team was subject to racist attacks when its players kneeled before games to take a stand against racism, and were met with boos from fans. English political leaders like Boris Johnson declined to defend the players from this racism, while Home Secretary Priti Patel dismissively called these protests from the athletes "gesture politics."

After Patel and other conservatives who had initially shamed the players for kneeling and protesting racism suddenly, performatively came to their defense, Tyrone Mings, also on the English team, vocally criticized this hypocrisy. "You don't get to stoke the fire at the beginning of the tournament," Mings said, "and then pretend to be disgusted when the very thing we're campaigning against happens."

The erasure of the so-called "politics" of sports isn't new, especially when it comes to Black athletes challenging the day-to-day racism and anti-Black vitriol they face even as powerful and influential star athletes, and speaking up about societal issues like police violence. The pressure on Black athletes to be silent and either quietly shoulder racist attacks on themselves and their communities, or be harangued by "fans," political leaders and media commentators if they do speak up, is the subject of the documentary series "Shut Up and Dribble." The series is notably named after a racist comment from Fox News anchor Lauren Inghram of basketball star and racial justice activist LeBron James.

This erasure is meant to ensure sports can comfortably be consumed by white and privileged audiences, who would otherwise prefer to ignore the realities of police killing and brutalizing Black people, or in other cases, fans' own participation in racist, online attacks on Black athletes. The upcoming Tokyo Olympics has banned athletes from any kind of political commentary, whether through kneeling or any other form of political protest. This requirement of Olympic athletes is undeniably dehumanizing, reducing athletes to their performances and splicing their intersecting identities and values from the Olympics' neat, white-washed presentation of sport as apolitical. Yet, this requirement hardly an isolated move in a culture that endlessly polices athletes and especially Black athletes — and a culture that treats entertainment like sports and television as supposedly nothing more than escapism.

The show is undeniably funny, and not meant to be taken too seriously. But at a time when real-life, English soccer players are being subject to vile racism from fans, the comedy's detachment from reality is noticeable and disappointing. In one memorable scene, Ted Lasso quoted Walt Whitman: "Be curious, not judgmental," a mindset the show could apply to reflecting the experiences of real players instead of choosing to downplay them. If the show's second season continues in this direction, the contrast between its insulated storytelling bubble and the actual English soccer could become deeply, stiflingly uncomfortable.