The couple revealed the depth of how much pain they had endured, and how backs were turned when they asked for help 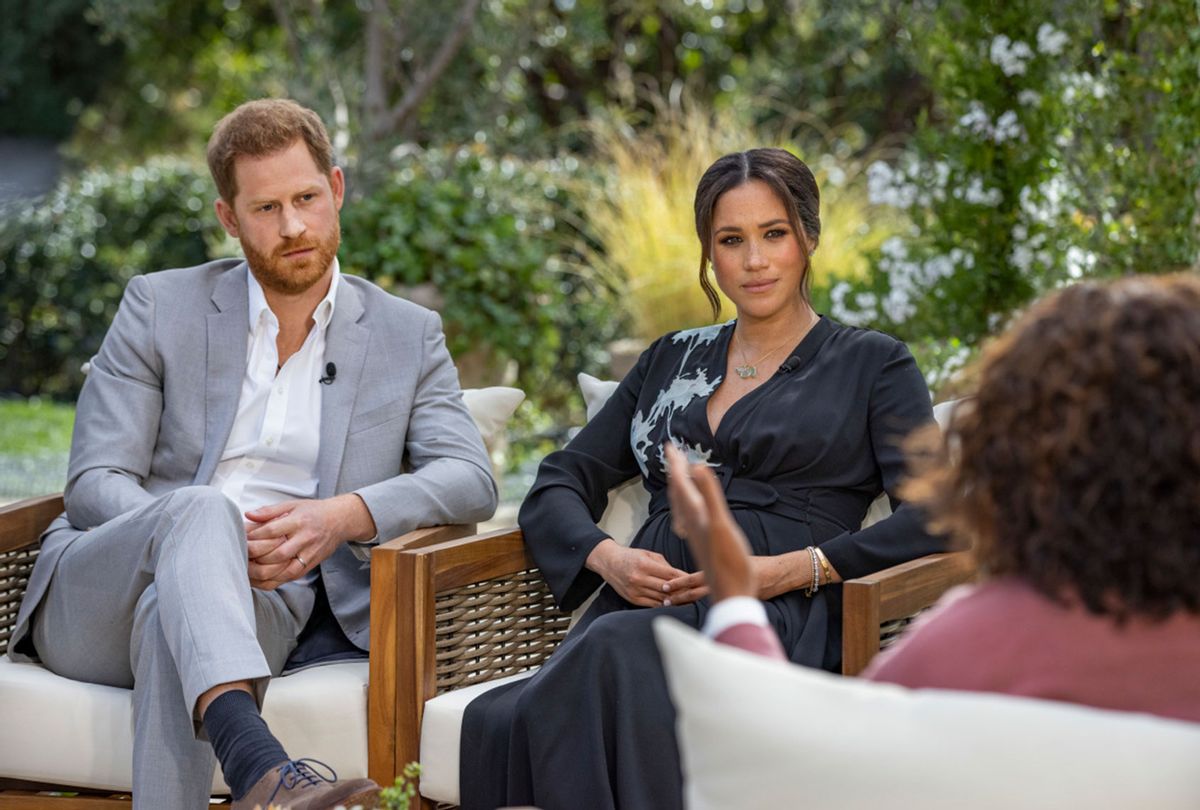 Oprah Winfrey as she sits down with Prince Harry and Meghan, The Duke and Duchess of Sussex, will be broadcast as a two-hour exclusive primetime special on Sunday, March 7 from 8:00-10:00 PM, ET/PT on the CBS Television Network. (Harpo Productions/ Joe Pugliese)
--

In CBS' highly anticipated special on Sunday night, Prince Harry and Meghan Markle, the Duke and Duchess of Sussex, spoke to Oprah Winfrey, opening up about their decision to leave the British royal family and the fractured relationships they left in their wake.

It was an explosive interview — enough so that it cost CBS a license fee of between $7 million and $9 million to air, per The Wall Street Journal — in which Harry described how meeting Meghan made him realize that he was trapped within the system of the royal family. This was only exacerbated by concerns over Meghan's mental health, the blatant racism to which she and their son, Archie, were subject, and ruthless tabloid scrutiny.

The couple realized together they wanted something different, and have since relocated to California, where they are focusing on a number of media projects, including a documentary co-produced by Winfrey about mental wellness and illness, and bringing attention to systemic racism.

"I'm just really relieved and happy to be sitting here with my wife by my side," Harry said. "Because I can't even begin to imagine what it must have been like for [Diana] going through this process by herself all those years ago. Because it has been unbelievably tough for the two of us, but at least we have each other."

Here are the biggest takeaways from the interview:

Perhaps the biggest revelation during the couple's interview with Oprah was that Meghan said life as a royal threatened her mental health and left her feeling deeply isolated; this culminated while she was pregnant with her son, Archie, in 2019. She described persistent suicidal thoughts.

"I was ashamed to have to admit it to Harry," Meghan said. "I knew that if I didn't say it, I would do it. I just didn't want to be alive anymore."

Meghan said she asked a senior royal (among them, Prince William, Duchess Kate, Prince Charles, Duchess Camilla, Prince Edward, Countess Sophie, Princess Anne and Queen Elizabeth) about seeking inpatient care, but was rebuffed because "it wouldn't be good for the institution."

At that point, Meghan said, she was left without options. She had surrendered her passport and driver's license upon joining the family. "I couldn't, you know, call an Uber to the palace," she said.

Harry has also spoken about his own struggles with mental health. In a 2017 interview with The Telegraph, he said that he came "very close to total breakdown on numerous occasions, when all sorts of grief and lies and misconceptions are coming to you from every angle," and that this led to years of panic attacks.

As a result, he said he knew he and Meghan needed to get out for both the health of his family, and indicated that he thought of his mother, the late Princess Diana, during the process.

While Meghan was pregnant with their son Archie, she said, there were "concerns and conversations about how dark his skin might be when he's born," since Meghan is biracial. There has been much speculation over who would have instigated or participated in those conversations, but in a Monday interview with CBS This Morning, Winfrey said she ruled out two people during an unaired conversation with Harry.

"He did not share the identity with me, but he wanted to make sure I knew — and if I had an opportunity to share it — that it was not his grandmother nor grandfather [Queen Elizabeth or Prince Philip] that were part of those conversations," she said.

Additionally, Meghan said she and Harry actually did want a prince title for Archie so he could have access to security, but the royal family did not follow the usual conventions and denied the title.

The depth of the U.K. tabloids' power and bias revealed

"There is this invisible contract behind closed doors, behind the institution and U.K. tabloids," Harry told Oprah. He then indicated that certain members of the British royal family would wine and dine certain reporters to get better press.

"There is a level of control by fear that has existed for generations," he said.

Meghan said that certain tabloids would have holiday parties at the palace.

"There is a construct that's at play there and because of the beginning of our relationship, they were so attacking and inciting so much racism, really, it changed the risk level because it wasn't just catty gossip," she said. "It was bringing out a part of people that was racist in how it was charged – and that changed the threat, that changed the level of death threats, that changed everything."

The couple did not spend much time refuting specific tabloid stories, though they used one as an illustration of how the press would turn stories around on Meghan. Oprah had asked about reports that Meghan had made Kate, Prince William's wife, cry during an argument about dresses for the flower girls.

According to Meghan, the opposite was true; Kate had actually made her cry, but the palace wouldn't allow anyone to speak publicly to set the record straight. However, Meghan said, Kate later apologized and sent flowers.

Right before the novel coronavirus was declared a global pandemic by the World Health Organization in March, a British tabloid published the exact location where Harry and Meghan were living outside of Vancouver. The couple, who were in the middle of "stepping back" from their roles as senior royals, were without a royal security detail and the Royal Canadian Mounted Police, who had been aiding in their protection, had announced they were going to scale back the assistance they were offering.

"Suddenly it dawned on me, 'Hang on, the borders could be closed,'" Harry told Oprah. "The world knows where we are. It's not safe, it's not secure. We probably need to get out of here."

For three months Meghan, Harry and Archie stayed at one of Perry's houses in Southern California with a full security detail. According to Markle, the couple didn't "have a plan," but Perry's kindness "gave us breathing room to try to figure out what we were going to do."

They didn't elaborate on the story any further, but some have speculated on social media that Perry may have opted to help the couple since they were, in part, fleeing the racist harassment of the British tabloids and a royal family that wouldn't stand up for them.

"They were willing to lie to protect other members of the family," Meghan told Oprah, without specifying to whom she was referring. "But they weren't willing to tell the truth to protect me and my husband."

British tabloids had run multiple stories alleging that Harry had "blindsided" his grandmother, Queen Elizabeth, with his and Meghan's decision to step away from their roles as senior members of the royal family. Harry denied this in his conversation with Oprah, saying that he had too much respect for her.

Harry believes his father won't speak to him anymore because he had taken his life into his own hands and was acting outside royal tradition.

"This is not a surprise to anybody," he said. "It's really sad that it's got to this point, but I've got to do something for my own mental health, my wife's and for Archie's as well."

He continued: "I feel really let down. Because [my father's] been through something similar, he knows what pain feels like, and Archie's his grandson."

According to Meghan, when she walked down the aisle during her and Harry's internationally aired royal wedding on May 19, 2018, the couple had already been married for days.

"Three days before our wedding, we got married," Meghan said. "We called the archbishop and we said, look, 'This thing, this spectacle is for the world, but we want our union between us."

Harry punctuated the revelation by singing the phrase, "Just the three of us" to the tune of "Just the Two of Us." According to Meghan, the vows they have framed in their bedroom are from that private ceremony.

The couple is expecting a girl

In one of the lighter moments of the interview, Meghan and Harry revealed that they were expecting a baby girl sometime this summer and that this would likely be their last child.

"To have any one or any two, but to have a boy and then a girl — what more could you ask for?" Harry told Oprah. "But now we've got our family. We've got the four of us, we've got our two dogs. Done."

Meghan and Harry had originally announced their second pregnancy on Feb. 14. "We can confirm that Archie is going to be a big brother," the couple said in a statement. "The Duke and Duchess of Sussex are overjoyed to be expecting their second child."

They're living off the inheritance left to him by Princess Diana

Harry told Oprah that he and Meghan were financially "cut off" from the royal family early last year, and have since relied on the inheritance left to him by his mother.

As The Telegraph reported, Prince William and Harry were both left around $8 million by their mother, which was invested and accrued interest. On his 30th birthday, Harry ultimately inherited $30 million.

"I've got what my mum left me, and without that, we would not have been able to do this," Harry said.

Harry said that he thinks his mother may have anticipated this turn of events."I think she saw it coming," he said. "I certainly felt her presence throughout this whole process."