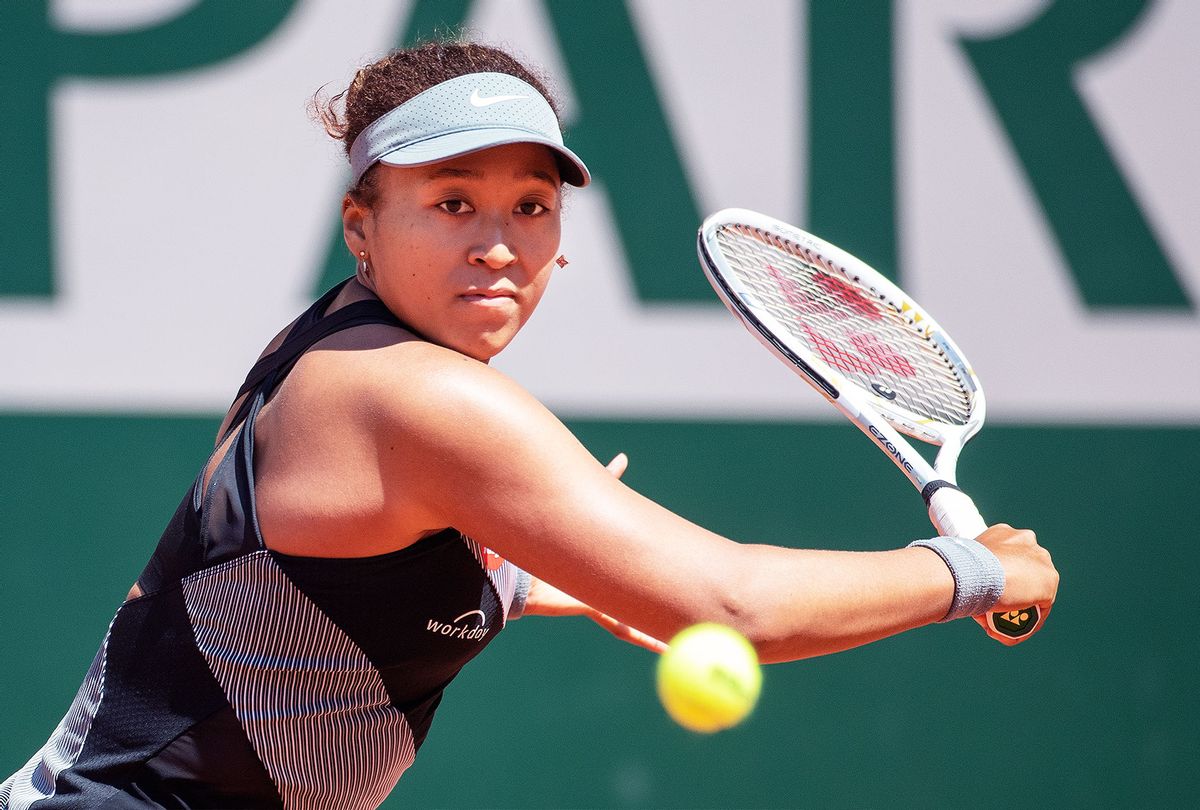 Naomi Osaka of Japan in action against Patricia Maria Tig of Romania in the first round of the Women's Singles competition on Court Philippe-Chatrier at the 2021 French Open Tennis Tournament at Roland Garros on May 30th 2021 in Paris, France. (Tim Clayton/Corbis via Getty Images)
--

Tennis superstar and four-time grand slam champion Naomi Osaka on Monday announced her withdrawal from the French Open, after officials refused to allow her to skip press conferences to preserve her mental health, and fined her $15,000 for skipping a press conference. In her statement, Osaka wrote that she never meant to be a "distraction" from the tournament or the other players, and opened up even more deeply about her mental health.

"The truth is I have suffered long bouts of depression since the US Open in 2018 and I have had a really hard time coping with that," Osaka said. Very graciously, she added, "Though the tennis press has always been kind to me (and I wanna apologize to all the cool journalists who I may have hurt), I am not a natural public speaker and get huge waves of anxiety before I speak to the world's media." Specific to the French Open, Osaka wrote that she "was already feeling vulnerable and anxious so I thought it was better to exercise self-care and skip the press conferences."

From Osaka's initial announcement on Wednesday, May 26 that she wouldn't conduct her press obligations, to her Monday withdrawal from the tournament, Osaka has sparked critical dialogue about mental health, exploitation of athletes, and persistent mistreatment of Black athletes across sports. Osaka's bold assertion of her own agency is inspiring in a sports world where mostly Black athletes are routinely treated as a spectacle that fans and media are entitled to full access to, rather than human beings.

And while many of the greatest athletes in the nation have spoken out in praise of Osaka's decision, French Open officials offered a predictably disappointing response that highlights how much work remains to be done to support athletes. French Tennis Federation president Gilles Moretton said at a Monday night press conference that he wished Osaka "the quickest possible recovery," as if her mental health struggles are as simple as an injury that will heal shortly and naturally, and without support from institutions like the French Tennis Federation.

Osaka isn't the first athlete to open up about how competition and sports media have impacted her mental health. But her decision to prioritize her well-being over what is, at the end of the day, a job, is a uniquely empowering move in a world where athletes — and especially Black athletes — are routinely subjected to mistreatment from institutions, media, and certainly, fanbases, especially in the age of social media. Osaka's decision is also empowering for all people whose jobs have affected their mental health in some way in our aggressively capitalist society, reminding us that nothing is more important than our safety and wellness.

The same holiday weekend Osaka announced her withdrawal, several Black NBA players were physically attacked by disgruntled fans. In the case of Brooklyn Nets player Kyrie Irving, the young white man who threw a water bottle at Irving on Sunday night was arrested and charged with assault by the Boston Police Department. In Philadelphia, where Washington Wizards player Russell Westbrook and his team faced the Seventy-Sixers, another fan threw popcorn at Westbrook, days after another fan spit on Atlanta Hawks player Trae Young. There's also a long history of NBA players being subjected to racist verbal assaults from fans.

This mistreatment of basketball players by fans may seem separate from the French Open rules that pushed Osaka out of the tournament, but it's not. Rather, it's an extension of the same, dehumanizing sports culture that often treats disproportionately Black athletes as objects of entertainment that owe media and racist fans unlimited access to their performances.

Long before Osaka's rise in the tennis world, powerhouse Serena Williams has faced routine racist, sexist and dehumanizing media coverage, and rulemaking that's singled her out and needlessly policed what she could and couldn't wear. In one particularly upsetting case, Williams was barred by the French Open from wearing a catsuit, despite how wearing pants rather than a skirt helped her health after blood clots she'd faced throughout her life resulted in dangerous complications during her pregnancy. Black women athletes' physical and mental wellness and overall success have more often been punished and discouraged than celebrated and rewarded. The conditions that led to Osaka leaving the French Open are a part of this reality, which makes her exit on her own terms even more inspiring.

All too often, conversations about labor exploitation in sports are shut down when it's pointed out how much high-profile professional athletes are paid. But this ignores how much predominantly white-led institutions make from mostly Black athletes' labor, not to mention the fact that young, college athletes aren't even paid, all while the NCAA is a billion-dollar enterprise. And it ignores another truth: Labor exploitation isn't just about pay — it's about the conditions to which athletes are subjected that harm their mental and physical health, that dehumanize and even endanger them. By withdrawing from the tournament, Osaka didn't just prioritize her mental health. She refused to be used, and stood up for all athletes in the process.