"Shut Up and Dribble" hits its shot: A powerful rebuttal to Laura Ingraham — and so much more 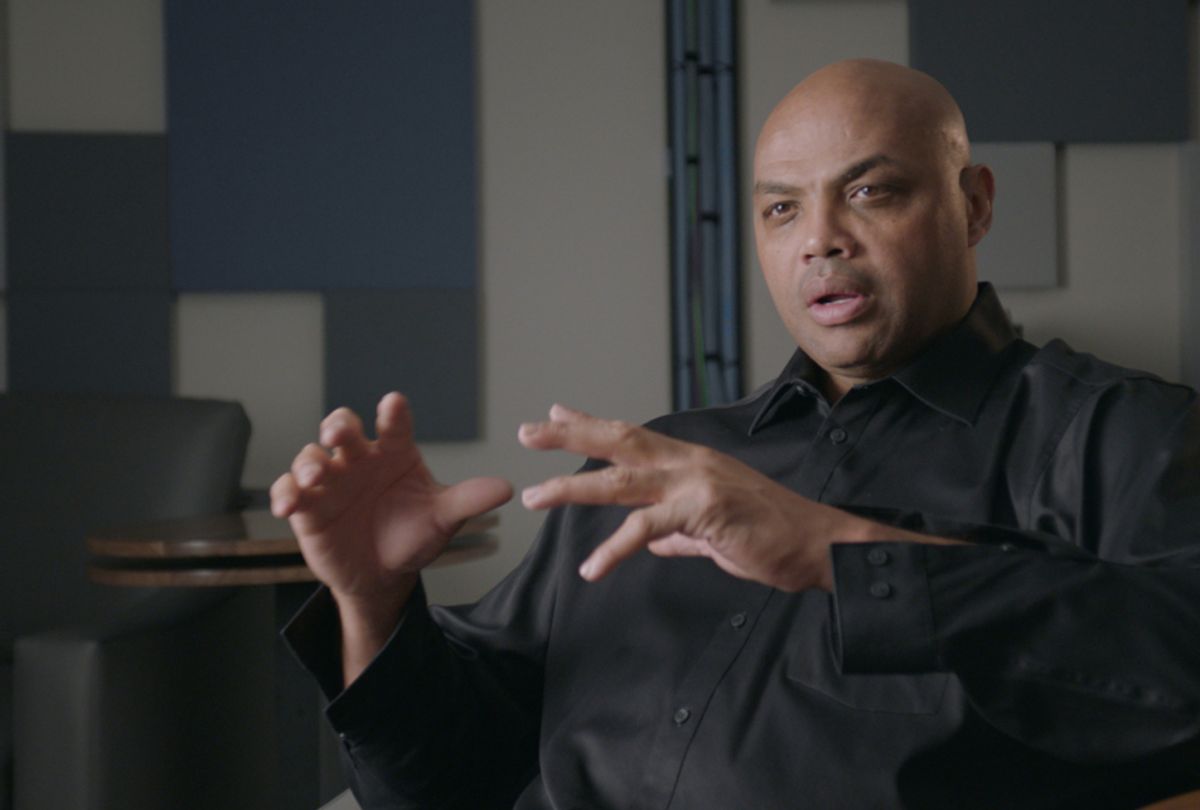 You could characterize “Shut Up and Dribble,” LeBron James’ three-episode documentary examining the impact professional athletes have played in civil rights and social justice movements even prior to the NBA’s official formation, as a three-hour rebuttal to one Fox News pundit’s smarmy, uninformed declaration. But that’s not entirely accurate.

Granted, the series might not exist if Laura Ingraham hadn’t made an issue out of a video posted on social media featuring James and Golden State Warriors player Kevin Durant, in which James observed, “The number one person in America is someone who doesn’t understand the people and really don’t give a f**k about the people.”

“Must they run their mouths like that?” Ingraham said in February on her primetime series “The Ingraham Angle," later adding, “It’s always unwise to seek political advice from someone who gets paid a hundred million dollars a year to bounce a ball.”

Then she smirks. “Oh, and LeBron and Kevin? You’re great players, but no one voted for you. Millions elected Trump to be their coach. . . . So keep the political commentary to yourself or, as someone once said, shut up and dribble.”

Director Gotham Chopra chooses to open and close the series with the now famous video and Fox News clip, dismantling any whiff of legitimacy that it may purport to carry down to the studs, with everything that comes between it.

And while that certainly sounds like a rebuttal, I suspect in this case the term is rhetorical. Regardless of how meticulously Chopra, James and their fellow executive producer Maverick Carter lay out the case of how benighted Ingraham’s point of view is, I doubt she’d take the time to watch the series, let alone consider its central point.

“Shut Up and Dribble,” which debuts Sunday at 9 p.m., is a conscious political statement. It’s directed by a person of color — the son of Deepak Chopra, not to mention the director and executive producer of the biographical documentary “Kobe Bryant's Muse.” Jemele Hill, the former ESPN personality targeted by White House press secretary Sarah Huckabee Sanders in response to Hill accurately describing Trump as a white supremacist, narrates each episode.

But as much as “Shut Up and Dribble” provides a history lesson, it is one taking cues and inspiration from the sports’ adrenaline, passion and intimate connection with hip hop. It pulses with an agility that celebrates basketball and its heroes in a way that infects casual fans or even — gasp — non-sports viewers. Each episode’s muscular structure keeps an eye on speed, force and elemental grace, constantly aware of what the audiences needs to keep pace with the various drives toward its goals.

At the same time, “Shut Up and Dribble,” a production from James and Maverick’s SpringHill Entertainment, does not forget that the reason this argument began in the first place is because of King James’ appeal as a celebrity.

So while the first episode provides us with a tour through history as it was experienced and shaped by the sport’s greats, the third is almost entirely devoted to James, his rise in the sport, his legend as Cleveland’s prodigal son and, yes, his activism.

Nobody should expect a docuseries created in reaction to a personal attack to refrain from being personal.  But in terms of providing viewers with a long view of activism in sports, primarily focusing on basketball but also including the necessary revisiting of igniting moments such as Muhammad Ali’s indictment of the Vietnam War and John Carlos’ and Tommie Smith’s Black Power salute at the 1968 Olympics, the first two episodes may be the strongest.

The opening installment celebrates the strides made by Hall of Famer Bill Harris, Kareem Abdul-Jabbar, Oscar Robinson and Julius Erving in the earliest days of the NBA, exploring the racial overtones of the manufactured rivalry between Larry Byrd and Magic Johnson.

Wisely it closes with a tease of episode 2, designed to be the series’ tentpole. That installment leads with the dawning of Michael Jordan’s revolutionary tenure in the NBA, highlighting the ways he ushered in the era of corporatizing personal brands.

This is not necessarily portrayed as an advancement, as the series specifically calls out the times that Jordan could have taken important political stands against bigotry but chose not to, famously remarking at one point, “Republicans buy sneakers too.”

“Shut Up and Dribble” counters this with a look at Allen Iverson and his role of incorporating hip hop into professional basketball — which, in turn, connects the second episode and Iverson’s era to that of James.

Among the series greatest strengths is its ability to present basketball’s history as part of fan conversation. And yes, this being a docuseries produced by one of the sports’ greatest superstars, those fans happen to be Larry Wilmore (one of the best interviewees Chopra and the producers called upon), Billy Crystal, Bob Costas, Justin Timberlake, Kendrick Lamar, Jay-Z and a slew of others.

But those cameos don’t get in the way of cogent examination of the price players such as Detroit Pistons star Isaiah Thomas and Chicago Bulls player Craig Hodges paid for speaking their minds or take a stand. Thomas sustained backlash for publicly observing, among other truths, that the mainstream media refers to outstanding black players as having “natural God-given talent.”

That part of the story also yields one of the series many endearing moments, as Chopra features Thomas laughing beside his former teammate Bill Laimbeer, the Pistons’ resident heel during the team’s “Bad Boy” era through the ‘90s, as they recall the ways they had to self-censor.

Hodges, meanwhile, was driven out of the league for making a statement during a visit to George H.W. Bush’s White House in a kufi and dashiki, where he handed the president a letter pleading for help on behalf of black people living in poverty.

Indeed, “Shut Up and Dribble” does not do much to burnish Jordan’s legacy. He isn’t interviewed for the series, but Hodges is. And in that interview, Hodges recalls that, for example, when Jordan was asked for his reaction to Rodney King’s beating in 1992, his very neutral response was that he didn’t know enough about the situation to comment. Hodges, in the present day, shakes his head. “I’m saying, man: seeing is knowing.”

On the other hand, NBA Commissioner Adam Silver looks like a progressive savior when compared to the leaders of the NFL. This is probably because among the many arguments about the cyclical nature of racism bubbling up in culture and professional sports is the reminder that everything Colin Kaepernick is being praised and vilified for doing now had already been done in 1996 by Denver Nuggets player Mahmoud Abdul-Rauf, who made headlines for refusing to stand during the National Anthem because he believed the American flag to be a symbol of oppression.

Black professional basketball players have always stood at center court in our discussions about race and moreover, our failure to grapple with it. That history extends back to the earliest days of black men entering the professional leagues and revolutionizing the sport, well over half a century ago when Russell became NBA’s first black superstar and the league’s first black coach.

That pressure to in many ways be all things, both to white America and African American culture, cost some athletes greatly as others like Jordan and Charles Barkley profited by remaining apolitical so as not to offend white America or, in Jordan’s case, ruin lucrative sponsorship deals.

That status quo lasted until recently, when the killings of Trayvon Martin, Eric Garner and Michael Brown politically ignited black athletes to stop being silent. A 2014 recording revealing Clippers owner Donald Sterling’s overt racism, directed specifically at Magic Johnson, only amplified the necessity of speaking up.

“I believe having a voice is everything. If you have it, use it,” observes Dwyane Wade, who joined James, Chris Paul and Carmelo Anthony in solemnly opening the 2016 ESPYs with a plea to fellow athletes to do just that.

“It’s time to look in the mirror and ask ourselves: What are we doing to create change?” James said then. This series continues his answer to that question.

Of course, Ingraham’s statement was utter nonsense when she said it and remains so this day. She knows that what celebrities think about politics carries significant weight. Everybody knows that.

Politicians are afraid of it. If that weren’t the case, Republicans would not have reacted to Taylor Swift’s announcement that she would be voting for the Democratic Tennessee Senate candidate Phil Bredesen by having a collective stroke.

In 2017, after the front gate of his Los Angeles residence was defaced with a racial slur, James observed in a press conference, "No matter how much money you have, no matter how famous you are, no matter how many people admire you, being black in America is tough."

But being black and famous does have power, obviously. Jay-Z shares in one scene that during a lunch he once shared with former French president’s Nicolas Sarkozy, the leader revealed his son had cornrows because of his admiration for Allen Iverson.

“You want to use that voice,” he adds. “You don’t want to silence it.”

But if it quiets down the Ingrahams of the world for a while, that's fine by us.