Ewan McGregor dazzles in "Halston," which neglects to understand the legend behind the fashions

Netflix's take on the designer is heavy on orchids & cocaine, light on insight into what drove and inspired him 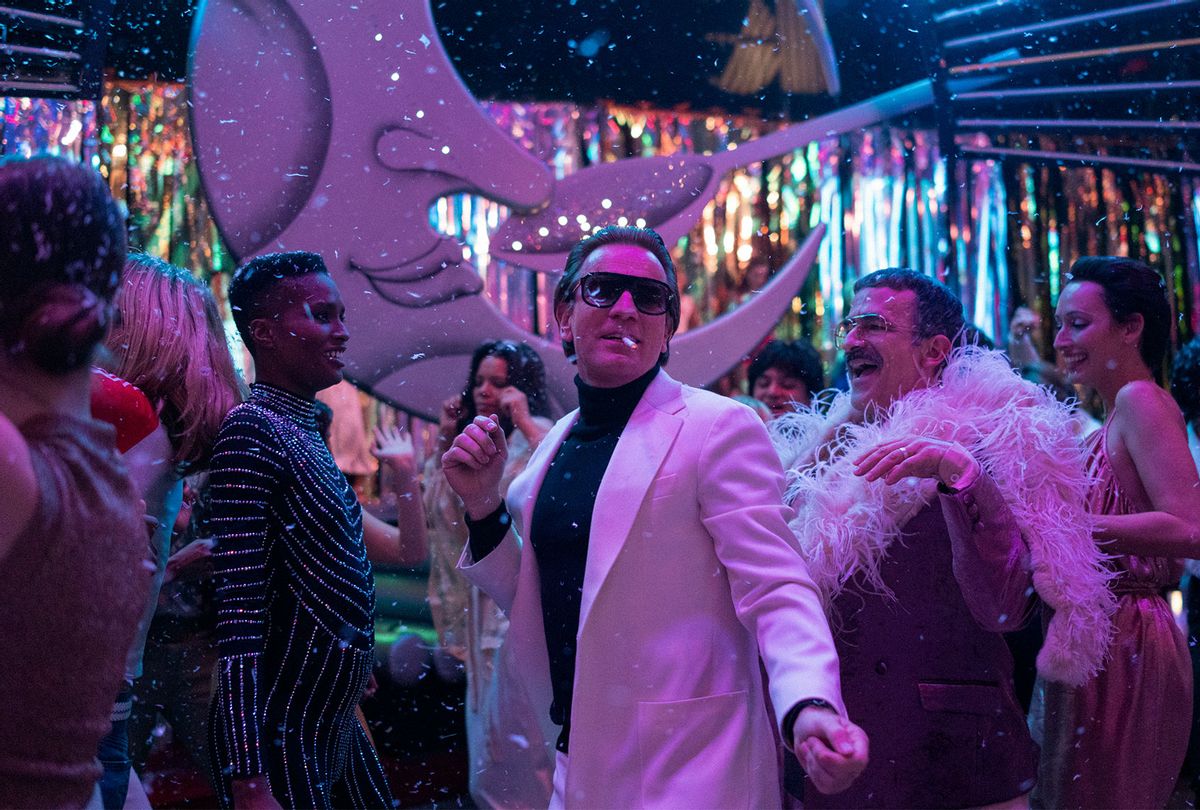 Halston, the once-ubiquitous fashion brand, taught us this cautionary lesson alongside Halston, the man. Early on in the five-part limited series named for the designer, played by Ewan McGregor, Halston forlornly realizes that inventing the shirtwaist dress wasn't paying the bills.

To do that he'd have to sell something bigger: the licensing rights to his name. Soon after an investor (Bill Pullman) purchases the rights to his moniker for millions of dollars.

This, he tells his creative partner Joe Eula (David Pittu), would give them freedom. Joe isn't so certain, but Halston reassures him that he hasn't actually sold his name – he's sold his trademark. "Your trademark is your name," Joe responds.

They have this exchange on a plane returning to New York from Paris, and as they sail above the clouds, breathing the rarest of air, Joe can't help but admit that kind of money can buy all the orchids in Paris.

Getting swept up in the rush of Halston was always the easy part, and "Halston," adapted from Stephen Gaines' book "Simply Halston," takes on a narcotic flow when it emphasizes that headiness, when the world was Halston's and his sobriquet graced everything from luggage to sunglasses to sensibly chic dresses.

The shirtwaist dress made Halston famous, a largely forgotten credit along with many of his other ready-to-wear mass market designs. Indeed, most people know or remember little to nothing about the one-time most successful individual designer in the history of fashion largely because he sold away the one thing that matters.

"Halston" strides onto the Netflix runway attempting to reclaim some of that legacy, but never hits the mark. High on glamour and low on insight, we're treated to eyefuls of elegance, McGregor's prosaic impression of Halston's silken fussiness and enough nose powder to make Donatella Versace dream of skiing.

But whatever poetry made Halston who he is remains left undiscovered and unspoken, and isn't poetry the heart of fashion design? Isn't that why you turn on a series about and named for someone, to attain some insight into the human behind the fabrication? You would think so.

Before Halston dressed everyone he specialized in made-to-order garments for everyone who was anyone. Listed among his friends and clients, other than Liza Minnelli, were Lauren Hutton, Bianca Jagger, Liz Taylor and Betty Ford.

Working with a veritable supergroup of creativity that started with fashion illustrator Joe Eula, Joel Schumacher (Rory Culkin), yes, the guy who brought us "The Lost Boys," and Elsa Peretti (a sylph-like Rebecca Dayan), as in the jewelry designer who modernized Tiffany & Co, Halston forged himself into a living myth.

Halston's life and career merged business and art in ways the fashion world had never seen, making director Daniel Minahan's choice to structure most of the drama around the business highlights and markers of decline somewhat understandable. The designer's failure on that front was public, spectacular and titillating.

Massive success came to him quickly. We see him in 1973, when he's hundreds of thousands of dollars in debt, ruefully complaining that he must be a real artist, "because I'm a terrible businessman."  By 1984 he has his dear friend Martha Graham (Mary Beth Peil) marveling with no shortage of alarm, "You just managed to crowd, 'I'm an artist, and all I care about is money,' into a single sentence!"

Martha Graham was nothing if not an idealist, while early in his career Halston learned that an artist's genius means little to nothing without endorsements from rich and famous.

Our first glimpse of Halston's professional success is the aftermath of Jackie Kennedy dropping his name as the milliner who made her famous pillbox hat. Soon after he was dressing Liza (breezily played by Krysta Rodriguez), then Studio 54's glitterati, and after that came the world.

Titans leave the curious an abundance of details to sort, and Halston's workaholism and excess created his own hoard within a compressed amount of time – less than the two decades Minahan, a TV directing veteran, spent trying to make a film about him. Twenty years is plenty of time to theorize as to what inspired and drove Halston aside from dual addictions to orchids and cocaine.

Yet the writers, including fellow executive producer Ryan Murphy, who has a credit on four episodes, barely avail themselves of any creative license in that respect. Instead the story marches through the standard beats of American success stories with all the music of a Butterick dressmaker's pattern, and with more than a few biographical details skimmed over or omitted. Humble beginnings beget ambition, leading to huge swings and grand failures; undeterred, he tries again, succeeds, hits the heights with all the party drugs, orgiastic sex and insane relationships he can't handle, mainly with prostitute-turned-artist Victor Hugo (Gian Franco Rodriguez). Then comes the decline, demented rampages, late night sobbing and ignominy.

It may be worth wondering whether the narrative's inability to believably breach Halston's notorious psychological opacity is intentional choice on the part of Murphy and his script collaborators. Famous people are alike in many ways, one commonality being a devotion to shielding the parts that contradict one's image. In that regard one can understand why Murphy and Minahan may have wanted to respect the mystery of what makes Halston tick. Murphy's an established brand himself, attached to a network procedural, several FX titles and a flotilla of Netflix projects.

However, and again, you really can't do that when the very point of watching this story is the name in the title. Sequined chic and cocaine-fueled disco fantasias create dazzling scenery, but hours' worth of that it is only mesmerizing to a point.

A couple of glimpses from his boyhood in Evansville, Indiana, when he was Roy Halston Frowick, are provided as the seedbed from which his mania to succeed and accumulate spring. Using terrible childhood memories as the go-to explanation for an artist's monstrosity or emotional difficulty is hackneyed at this point. Even if you don't feel that way, such frames don't reveal much about artistic process, the very details worth exploring in a dramatized profile of a man who reinvigorated American clothing design.

Cutting fabric to flow with the wearer is a Halston's signature, and he emphasized the blending of freedom with fashion. How and why he claimed this angle isn't explored; it simply happens at one point after he passes a couple of hippie girls on the street, but before he picks up a gigolo.

Purely from an aesthetics perspective, "Halston" is fabulous. Minahan, who directs every episode, saturates each frame in stylistic succulence, favoring rich colors and clean lines and all impeccably lit and staged as Halston might have demanded.

But when isn't this the case with a Ryan Murphy production? Although I got the impression that Murphy's touch is light relative to his other work, including his "American Crime Story" treatment of Gianni Versace, his presence makes itself known in dialogue like, "I get it. I got too much. I hate me!" and "The orchids are part of my process! You can't put a budget on inspiration!"

Primarily this is McGregor's showcase, and that's works in its favor because the actor, like Halston, is handsome and cleans up nicely. He probably strikes a lot of people as an odd choice given his association these days with motorcycle travelogues and young Obi-Wan Kenobi; he's also credited as an executive producer.

If you enjoy the man, he's not hard to watch. He'll get you through. Nevertheless I was left wishing for a thicker weaving of Halston's relationships with Liza and Elsa. Minnelli remains one of Halston's staunchest defenders to this day but in "Halston" she's basically the hero who swoops in whenever he needs saving. When she does, you may appreciate Rodriguez's choice to tread lightly with her impression of Broadway's darling: She twinkles too emphatically at first but eases into the role as the series goes on.

Dayan embodies Peretti's effortless refinement and doesn't do much additional work, but perhaps she doesn't need to. Still, given Minnelli's closeness to Halston and Peretti's loyalty long after he ceased being reasonable, devoting more of the plot to their relationships with and to him could have provided more of that interiority we're craving.

By the time Halston was ousted from his company in the 1980s, the clothes bearing his name were slumping on JC Penney's racks. He died in 1990 but lost ownership of the moniker he created long before that, adding to the tragedy of the one-time giant's fade into obscurity.

"Halston" brings him back, but only partway. And that's a real shame. Halston reinvented women's fashion, as one of his confidantes points out, by wrapping a woman "in a feeling, in your taste."

Defining that feeling and imagining its source could have made "Halston" something extraordinary instead of common and comfortable.

"Halston" premieres Friday, May 14 on Netflix.