It's not just "Rudolph": Holiday TV specials are mostly creepy, weird or depressing as hell

A lot of classic holiday specials have horrible retrograde messages. That just makes them quintessential Americana 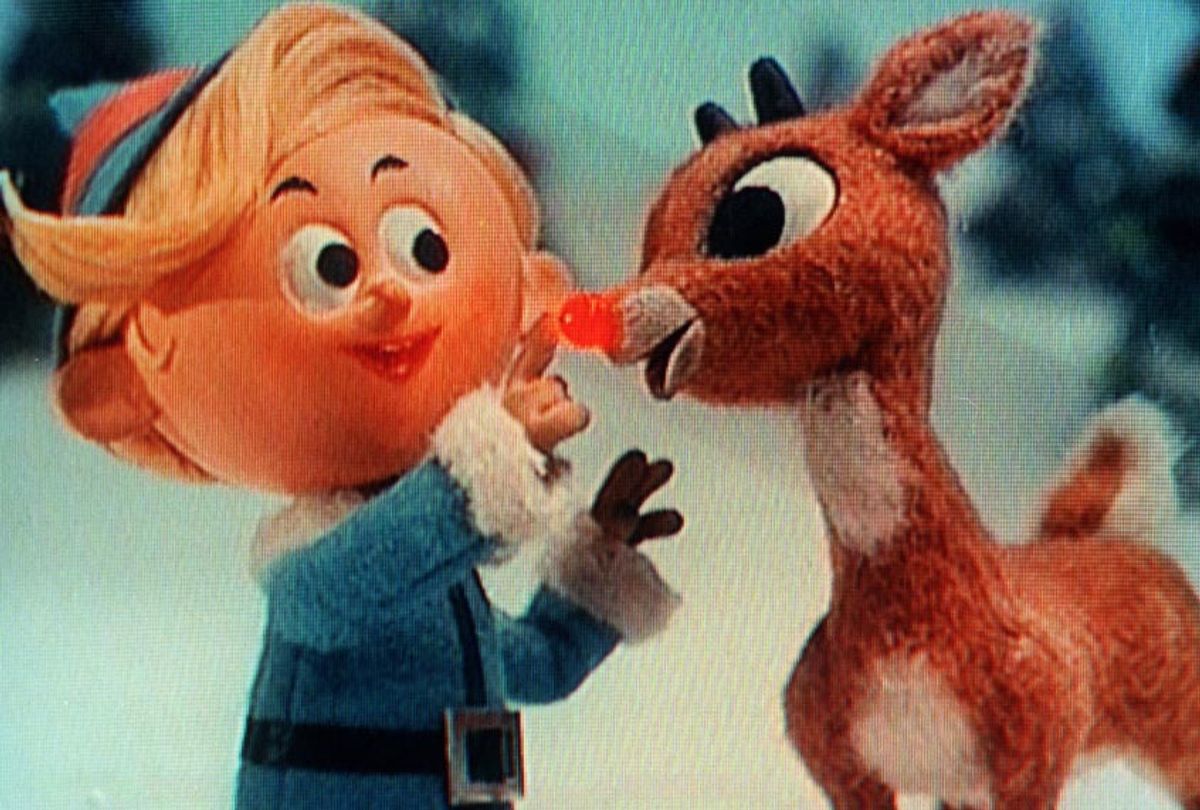 “Rejected for having a unique deformity, Rudolph runs away with another misfit, a dentist elf. Before Rudy can find a toy attorney to sue Santa for discrimination, the big guy settles and makes him head of his sleigh team.”

This is how yours truly summarized the plot of "Rudolph the Red-Nosed Reindeer" in 2004 as part of a holiday programming round-up for the local newspaper where I worked because, well, it’s true. Even this doesn’t even cover every offense on display in the beloved special.

In “Rudolph” Santa stands by while Rudolph is bullied and ostracized by his peers and adults alike and informs Donner, Rudolph’s father, that he should be ashamed of having a kid with a glowing red nose. The father of Rudolph’s crush Clarice announces that no daughter of his is going to associate with a reindeer with a birth defect.

Hermey the elf gets booted from the workshop because he has different aspirations than working on the toy factory line. Before the two escape the hostile work environment that is Santaland, the audience also enjoys sexist statements from the narrator, who drops a line about the delicate womenfolk.

What we’re saying is, “Rudolph the Red-Nosed Reindeer” is the quintessential American holiday special.

“Rudolph” remains the standard bearer for holiday programming because it highlights the ways that nearly every single holiday classic – and many new ones – are problematic. In some sense one might think of it as the mother recipe of the American Christmas special.

To those who suspect that this is another case of a lefty pinko progressive outlet crapping on America’s favorite magical ungulate, know this: I love “Rudolph.” The special plays a central role in my annual holiday baking day, holding a place of honor alongside other Christmas classics of our house, including “A Charlie Brown Christmas,” our “South Park” holiday special DVD set and “Bad Santa.”

At the same time we can acknowledge that the story is as flawed as that Huffington Post story that kicked off a recent online rampage suggests. Observing its weird retrograde tone is far from new, and the fact that said article twisted the knickers of many a conservative is as senseless as getting angry about the "War on Christmas."

Yes, “Rudolph” is hilariously steeped in ignorance and, if you have a warped sense of humor, comically dark. None of these things ruin its classic status any more than Hallmark Channel’s vaguely sinister formula, which consistently critiques women for being ambitious and independent, prevents millions of viewers from lapping up the sugary silliness of their movies. At least their heroines don’t die, although some of the hottest guys who they fall in love with happen to be widowers.

The American vision of holiday perfection is a largely unattainable fantasy. Idyllic, universally friendly small towns unblemished by cold industry or urbanized inhumanity are as much of a myth as the notion that seasonal warmth and cheer can unite the world in brotherhood. Commercials advertising families gathering together for the season can feel like a splinter in the eye for many, many people.

So if many of the holiday specials we prize the most typically incorporate some element of death, abuse, cruelty and general wickedness, all of which is somehow dispelled by the magic of Christmas, that reflects the shadow side of the American expectation of holidays. "Rudolph the Red-Nosed Reindeer" is a symbol of the rule of Christmas Americana, not the exception. And that's just fine. Cheers to Rudolph.

“Rudolph,” originally broadcast in 1964, forgoes the tragic death part of the equation, although there are a few close calls (including one involving a hapless Yeti tortured into submission under the guise of helping it, using trap dentistry). But a number of specials produced by Rankin/Bass more than make up for its relative lack of mortality, some of which have become seasonal broadcast staples.

Take 1968’s “The Little Drummer Boy,” re-airing on cable’s Freeform on Tuesday, Dec. 18 at 7 a.m. and Sunday, Dec. 23, 7 a.m. This is the Rankin/Bass story of the kid who inspired the song David Bowie and Bing Crosby would eventually slay in that incredible 1977 mash-up. Since the lyrics don’t fill in his biography, the writers helpfully do so by spinning the tale of a kid whose parents were murdered by the ancient version of ISIS and, while wandering with his pets, ends up being captured and enslaved. Pa-rum-pum-pum-pum!

Even that doesn’t have anything on 1977’s “Nestor, the Long-Eared Christmas Donkey,” probably the most depressing damn holiday special around. As abused as “Rudolph” may have been, that was cuddling in comparison to the beatings and bullying Nestor endures for the bulk of this special capturing the true meaning of Christmas.

At one point his keeper takes out his rage on the young donkey by going full Tom Brady on him and flinging him into a cold forest in the middle of a snowstorm, where he hits a tree and multiple branches on the way down.  Nestor’s horrified mother breaks out of the stable, finds her son and protects him from the freezing winds and snow with her own body, freezing to death in the process and making Nestor an orphan on top of everything else.

Everything works out because Nestor becomes the Uber for the Virgin Mary, carrying her and leading Joseph safely to Bethlehem. He returns to his abusers a hero, and is simply overjoyed when the stable master responsible for killing his mother lifts him aloft with pride. And instead of mule-kicking his and his mom's abuser in the throat, Nestor is just pleased to be of service.

You can wake up this heart-warming Christmas classic on AMC, where it’s airing on the mornings of Friday, December 21 and Monday, December 24.

And then there’s the wonderful 2004 masterpiece “Grandma Got Run Over by a Reindeer” which, like “Frosty” and “Rudolph” and “Nestor” and “Little Drummer Boy,” was inspired by a hilarious hit song about Santa’s reindeer running down and killing a drunk elderly woman.

It’s a really crappy hit song which in turn birthed some other terrible songs included in the hour-long animated tribute set to air Wednesday, December 19 at 8 p.m. on The CW. In the song, Grandpa’s response to his longtime mate’s death by Christmas misadventure is to continue enjoying his football and beer “me-time” as if nothing out of the ordinary had occurred.

In the special, Paw-Paw dons a white top hat and tuxedo to sing a number about grandma spending Christmas with the superstars — as in Elvis and other dead celebrities — “since that reindeer ran her down that fateful night.”

Obviously the Rudolph Controversy, which is now a couple of weeks old, is an inflated deal drummed up by conservative media and amplified by talk shows such as “The View.” During a recent episode Whoopi Goldberg roused the audience with a performance of the song’s lyrics in the style of a preacher from the pulpit by way of asking what the big deal is, since Rudolph is an American hero.

Of course he is.

But the brouhaha surrounding what is either a tongue-in-cheek observation about an outdated plotline or an example of liberal over-sensitivity misses the point. What’s real about this time of year is the complicated stew of feelings it evokes in all of us. Like a midwinter storm, it’s magical to behold from the safety of a warm place, but to be caught in it with no shelter in sight is a miserable experience. A blanket of snow is beautiful, and for a while we can forget that it hides dead matter and mud beneath it.

If the holidays are both things, so are its specials — fortunately, for pundits and talk shows at least. Besides, with rage being as popular a flavor as cinnamon or peppermint, the good news for the killjoy industry is that literally any special can be interpreted in a way that can offend anyone. Even the legend of "Rudolph" was brilliantly reinterpreted as the origin story of a violent mob boss by the late great "MADtv."

Take “Frosty the Snowman,” for example, the 1969 classic story of a magical snowman who brings fun to boys and girls. Or, if viewed from another perspective, it’s the tale of a snowman possessed by a demonic hat. Before the mayhem he causes around town is complete, Frosty nearly succeeds in luring a little girl to her death before he’s defeated by a heroic man who locks him in a greenhouse.

But 1966’s “Dr. Seuss' How the Grinch Stole Christmas,” airing on NBC on Christmas Day at 8 p.m., is truly a right-wing fantasy if you think about it. The Grinch, high on his peak,  is Donald Trump, assisted by a loyal if droopy-faced companion we can only guess is an avatar for Lindsey Graham or maybe Ted Cruz.

The residents of Whoville are all socialists, especially Cindy Lou Who, a.k.a. Alexandria Ocasio-Cortez and the Fake News. The Grinch wisely and soberly removes all of their wasteful indulgences and cancels the big Christmas party. A peaceful protest gums up the works until, just to shut them up, the Grinch gets his #MAGA on since Christmas arrives all the same. In the end, everybody falls in line to worship The Grinch and be rewarded with jobs and roast beast, presumably cooked to the texture of shoe leather as the good lord intended.

Or, as described 14 years ago, it’s the story of how “a green ectomorph jacks Whoville's gifts. Then, feeling a heart attack coming on, he's moved to return them and pretends to be a hero.”

Weird flaws and all, they're still called specials for a reason. They're something else, and only around once (or a few times) a year, like relatives. Embrace them, or grit your teeth and muddle through. It's the American holiday TV way.