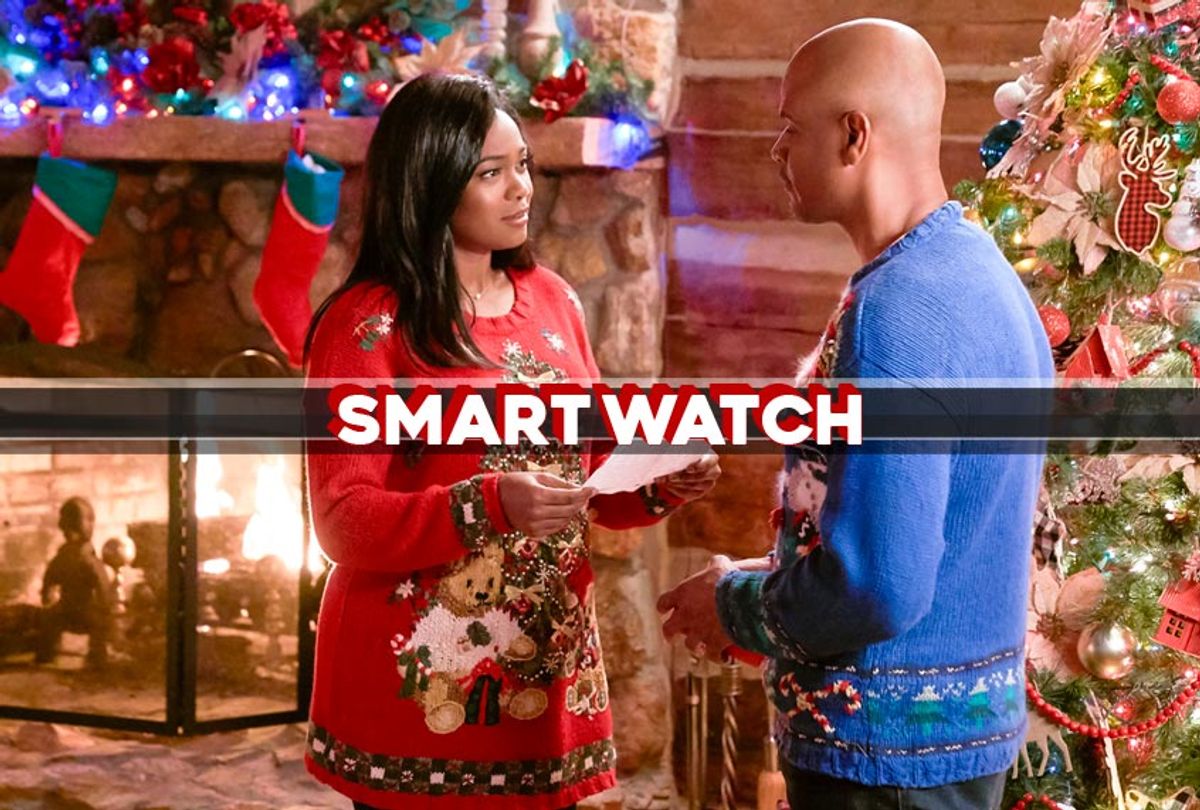 Four weeks before Christmas, with days getting dark, I fixed up some cocoa and turned on Hallmark.

When what to my wondering eyes did appear . . . could this be? . . . Yes, it’s true: black people are starring in Hallmark Channel holiday movies. In 2018.

At long last, Hallmark Channel is extending its Burl Ives fantasy of Christmas to include African Americans. Not just, you know, as the supportive black friends to Candace Cameron Bure or Lacey Chabert but as the main event, the stars who get to deck the halls and fall in love and abandon lucrative careers in major cities for a shot at wholesome small-town living in the Real America.

Black stars are the center of “Christmas Everlasting.” Look at the poster: There’s Tatyana Ali (the little sister on “The Fresh Prince of Bel-Air”) and Dondré Whitfield (formerly of “The Cosby Show” and “All My Children”), a plaid quilt hovering behind them, smiling at us but not physically touching.

Featured along with Ali and Whitfield are their co-stars Dennis Haysbert (i.e. that nice pitchman from the Allstate commercials, or the best president on “24”) and Patti LaBelle (who the typical Hallmark viewer knows as “that lady who makes those tasty sweet potato pies”).

But wait . . . this is bigger news than you might suspect. For “Christmas Everlasting” also happens to be a Hallmark Hall of Fame movie, scheduled to debut in the primetime slot on Thanksgiving weekend. It premieres Saturday at 8 p.m.

“Christmas Everlasting” isn’t a token offering to viewers of color, either. On deck is “A Majestic Christmas,” due on Sunday, December 2 at 8 p.m., starring Jerrika Hinton. “Sister, Sister” star Tia Mowry-Hardict joins Duane Henry in “A Gingerbread Romance,” debuting at Saturday, December 16 at 8 p.m.

Meanwhile over on Hallmark Movies and Mysteries, Christina Milian also stars in “Memories of Christmas,” debuting Saturday, December 8 at 9 p.m. It’s as if Hallmark finally gets that black people besides Stevie Wonder and Run D.M.C. and Mariah Carey enjoy cheeseball Christmas traditions too!

Not just smiling at us from the borders of the poster, a mantle carried by Holly Robinson Peete, Sheryl Lee Ralph and others in years past.

Not just playing the advice-giving best friend or the helpful co-worker. (This year, said honor goes to Cardi Wong, grinning brightly at viewers from the edge of the poster for “Road to Christmas” poster, staring Jessy Schram and Chad Michael Murray.)

Nope, these are leads – romantic leads. Men and women of color who get to live out the same Hallmark fantasy as their white cohorts: the ladies are overworked career women, the guys get to play the strong, sensitive “ones that got away” or maybe smart business owners who have specific ideas about how to maintain their hometown’s charm and values and, of course, keep Christmas in their hearts.

The Hallmark Christmas fantasy, as seen on TV, follows a formula that’s beyond socially problematic if you think about it too much, or truly at all. Most of its films are centered on a heroine who has put aside her divinely-prescribed duties to bake and make a happy home for the children she forgot to bring into the world, whose life is somehow transformed by the magic of Christmas. Specifically, the magic of Christmas in small town America, where there are only a few small shops on main street and the local café only recently got the Internet.

But as TV formulas go, this is a winning one. Since 2009 Hallmark has been the “Countdown to Christmas” destination for American viewers who don’t mind the idea of kicking off the season before Halloween, i.e. Satan’s holiday. And for all that time, Hallmark’s depiction of Yuletide romance has placed white people front and center.

It still does, mind you. Hallmark’s holiday film roster is 37 movies strong this year. Black actors star in four of these, or 10.8 percent. Black people comprise about 13.4 percent of the population, according to U.S census stats, so while Hallmark’s representation isn’t quite up to par, it’s better than 2017’s percentage of zero. We’ll take it.

Inclusion hasn’t taken anything away from Hallmark’s established stable of Caucasian actors; people have been losing their minds over seeing the cast of “One Tree Hill” go full gingerbread on Hallmark and its Christmas flick competitor, Lifetime.

Speaking of which, Ali also pops up Lifetime on Sunday, November 25 at 8 p.m. when “Jingle Bell” makes its debut.

Diversity, as you can see, has not impacted the holiday made-for-TV formula in any significant way, either.

For example, the synopsis of “Christmas Everlasting” tells us that Ali’s character Lucy Toomey is a corporate lawyer on the very of being made partner after the New Year. She’s sacrificed having a life in order to put in long hours and achieve something most black women never will.

In fact, as black women watching this know but might not want think about too much — we get to tune out the woes of life during Christmas too, dammit — Lucy has probably had to work three times as hard as her white peers who made partner before her.

Shh! Stop thinking about Real Life! This is Christmas.

When Lucy’s older sister Alice unexpectedly dies, she has to head back to her small town birthplace of Nilson’s Bay, WI — which surely is nowhere near Baraboo — and handle Alice’s estate. There, Lucy finds her high school sweetheart Peter waiting for her, who helps her meet the requirement Alice placed in her will, that Lucy must live in the family home through the holidays for a total of 30 days.

B-b-b-but her career! All that hard work! The chores! The stores! Fresh air! Times Square! That’s all over now, baby, because the hot boo from “Queen Sugar” going to take care of everything now.

By the way, in Aly’s Lifetime flick, she confronts another high school sweetheart left in the dust, only this time she’s tasked with helping to produce the traditional Christmas Eve Pageant in her hometown, which is completely different hometown than the one in “Christmas Everlasting.”

Fellow Hallmark star Mowry-Hardict, meanwhile, already met her Lifetime obligation in the form of Lifetime’s Thanksgiving Eve offering “My Christmas Inn,” which co-stars fellow “Sister, Sister” castmembers Jackée Harry and Tim Reid. In that film, her character inherits a cozy Alaska inn from her aunt, and gets courted by the town’s handsomest attorney. That’s right: The dream of real estate ownership and inheritable wealth, systemically denied to large percentages of African Americans in real life, is alive and well on Hallmark and Lifetime.

And in this way, this Christmas will be a very special Christmas for thee. And me!

For its part, Hallmark has been well-aware of its inclusion deficit for many years now. Hallmark’s Bill Abbott, the president and CEO of Crown Media Family Networks, talked to us about it in 2016 and gave us a few incredibly weak answers as to why the channel has all but excluded people of color, including stating that a lot of the production takes place in Canada.

International Business Times wrote another story about Hallmark’s continuing dedication to portraying Christmas as extremely white, and also laden with snow, in 2017. What’s interesting is that he gave many of the same answers while pointing out that it did ease into the melanin pool up to its ankle last year, casting (very Euro-looking) Latinx stars Julie Gonzalo starring in "Falling for Vermont" and Alexa and Carlos PenaVega, the leads in "Enchanted Christmas.”

The outlet generously allowed Hallmark to claim Catherine Bell’s Iranian heritage, which overlooks the fact that Persians are white people too. Dean Cain, who is partly Japanese, has also starred in a few Hallmark films.

Be that as it may, none of this changed the damning stat that even then, none of Hallmark’s 2017 holiday movies cast Asian Americans or African Americans in lead roles.

So what happened between then and now?

For one thing, Abbott’s claim to IBT that “This is an industry-wide problem” has become flimsier by the season, particularly in a year where even CBS cast leads of color in its new series – not co-leads, leads. Clearly the folks at the top recognized this.

However, the channel wouldn’t have made an effort to fix such a public relations problem if it didn’t have an economic motivation to do so.

Since Salon interviewed Abbott, the channel made a development deal with Roker to adapt his book “The Midnight Show Murders: A Billy Blessing Novel.” Roker’s work evolved into “Morning Show Mystery,” starring Robinson Peete as Billy Blessing (original written as a male character). Hallmark also gave Robinson Peete and her ex-NFL player husband Rodney Peete their own reality series, “Meet the Peetes,” which premiered in February 2018 and attracted a healthy audience of 705,000 viewers.

Eventually “Meet the Peetes” settled into a season audience average of around 570,000 viewers per episode, proving Hallmark viewers would actually watch shows about black families if such content were made available. It has since been renewed for a second season.

And though this probably didn't factor in as highly as the financial wisdom of inclusive casting, Hallmark executives probably noticed that the world collectively cooed over the royal wedding of Meghan Markle to Prince Harry. If Buckingham Palace can embrace a black royal, surely it was time for Hallmark to step up.

Late though the channel may be, this is a big deal. Hallmark has laid claim to the holiday movie season for many years now and reaped the benefit of doing so in the form of very high ratings. And as I have previously written, Hallmark is one of the most prolific producers of made-for-TV movie content in the industry. It has extended the careers of actors that haven’t gotten calls from broadcast networks in many a season — and along the way, cast a number of performers who remain known quantities to the broader TV audience.

And its holiday movies — the channel will air 37 across Hallmark Channel and Hallmark Movies & Mysteries this year — have long dominated the ratings. Last Saturday’s premiere of “Christmas at Graceland,” starring the blonde kewpie doll and “American Idol” contestant Kellie Pickler, scored the top cable ratings slot with an audience of 4.66 million viewers.  That’s 2.2 million more than the second-place contender in the overall cable audience, ESPN’s broadcast of the football match-up between Duke and Clemson.

All this makes Hallmark an attractive destination for advertisers.

Viewers don’t care about that, of course. What matters is being able to see a version of themselves reflected in a fairy-tale ideal of the holiday. Hallmark has, at long last, given that gift to Black viewers.

Asian audiences and other people of color still get coal in their stocking, though. But the marketplace could change that. After all, 2018 is the year in which “Crazy Rich Asians” hauled in nearly $174 million in the domestic box office, and Sandra Oh made Emmy history in becoming the first woman of Asian descent to be nominated for best lead actress in a drama series.

So hang in there, Cardi Wong! Odds are Hallmark will ease you toward the center of some yet-to-be designed holiday poster in some version of Christmas future.

Until then, may all our TV days be merry and bright, and may all our Hallmark Christmases be increasingly less white.