Elf on a Shelf is a nightmarish voyeur. It's time to end this insidious "Christmas tradition" 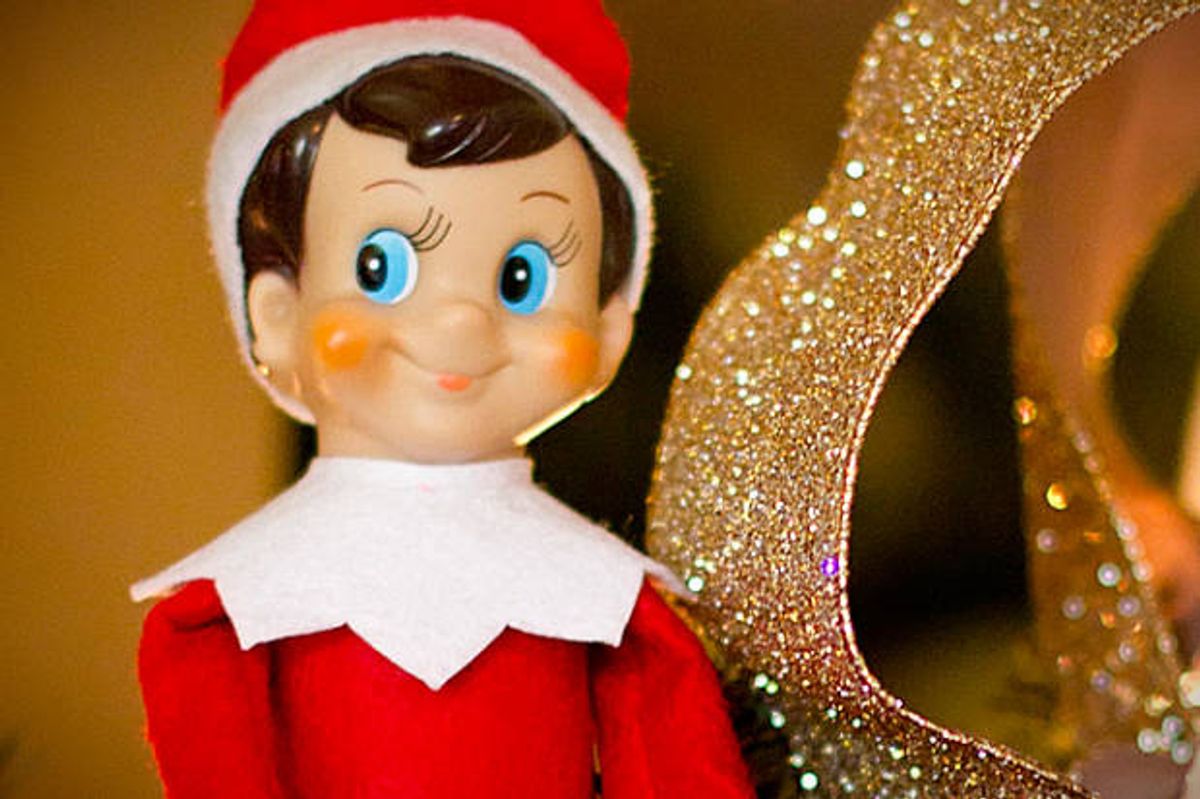 I hate the Elf on the Shelf. I hate his evil, dead-eyed sidelong smile. I hate that he invades innocent children's homes without compunction. I even hate his full name: "The Elf on the Shelf: A Christmas Tradition." I hate how it sounds like it's a threat, like, "I'm not just the Elf: I'm the Elf who will return every goddamn Christmas of your life, everybody. So GIVE ME A NAME AND DEAL WITH IT." I hate how he seems to become more powerful with each passing year.

Have I mentioned I hate the Elf on the Shelf?

Once upon a time, long ago in 2005, a lady named Carol Aebersold self-published a book about her innocuous holiday tradition. It was the story of an elf who would appear in your home after Thanksgiving to quietly observe how well the family was behaving, report back to Santa at the North Pole each night and reappear somewhere else in the household the next day. Whimsical!

Today, the Elf is a best-selling, full-blown industry. He floated triumphantly this year at the Macy's Thanksgiving Day Parade, and he's been all up in our faces ever since. And why not? He's eminently marketable. Like American Girl dolls, or Cabbage Patch Kids in days of yore, part of the Elf's allure is his customizable nature. There are girl elves and boy elves, blue-eyed elves and dark-skinned elves, all waiting to be "adopted." Right, like I'm going to adopt a narc.

Part of why I dislike the Elf is the same reason I dislike Facebook's privacy settings -- he's an Orwellian nightmare. Let's teach our children that privacy is meaningless! I may have grown up with a Santa who sees you when you're sleeping and knows when you're awake, but my Santa was never lurking around in my house, keeping tabs on me for weeks at a time. I don't know, I just find the whole concept of an advent-long period of intense scrutiny by some judgmental little voyeur in a pointy hat creepy. Better than a Krampus, I guess, but still. Furthermore, the notion that the generosity of the season is not just contingent upon a child's behavior, but that said behavior is being studied and judged by an independent auditor, is bizarre. And it reinforces the message to even very young children that the only reason to be good to each other is to get stuff. Isn't teaching morality about teaching children to be nice even when no one is looking?

But let's say you're a reasonably sane person; you're not heavy-handedly playing up the avenging minion of Santa Claus thing. You just like the fun of moving the little guy around, and having the kids gleefully search for him each day. It's not so different from other holiday rituals, after all, like lighting candles or opening up the windows in an advent calendar. We all succumb to the holiday silliness in different ways. Can I just ask, regardless, that you not post a picture of where the Elf is every stinking day?

If you're Elfing because you love to Elf, knock yourself out. If this is some freaky competitive mothering thing, though, please, no. My friend Julie, who writes the A Little Pregnant blog, emailed me recently her own Elf issues. "When have we made it magical enough? Is there no length to which we'll go to make our children feel ever more entitled and indulged?" she asked. "This morning I saw a picture someone had posted on Facebook where the Elf was sitting on a toilet. But that's not the problem. The toilet, you see, had been entirely gift-wrapped and the Elf was posed on the seat with scissors, tape, and trailing ribbon as if the Elf had stayed up all night wrapping it -- when in fact someone did." She added, "I like unforgettable holiday magic as much as the next lady -- doing fun stuff with our kids apropos of nothing much. No fuss, no elaborate ritual, no me staying up all night. But there's a weird performative aspect of this. If you didn't have Facebook to post that shit on the daily would you still go all-out?"

And Michelle, the mother of a preschooler in Virginia, went further, noting that there's a whole lot of peer pressure involved in Elfing. "Part and parcel of all of that is the marketing craze around the Elf and the notion that if my family opts out, we're not participating in 'a new Christmas tradition,'" she said. "I'm hardly one of those 'Keep the Christ in Christmas' or 'War on Christmas' people -- if anything, I try to be cognizant of people who don't celebrate the holiday. But all of that said, I detest the implied judgment of my family's values and our choices for not opting into the Elf.  I've taken a lot of heat from people I consider friends for my 'humorless' approach to all of this -- all because I think it's developmentally inappropriate for small children, creepy (come on, look at it!), and a hateful marketing machine. And just perhaps, this being the newest entry in the Mommy Wars is the biggest offense of all."

He's a "tradition" you can buy at Target, a holiday no-brainer. He teaches kids that they're constantly under surveillance, and to behave for strictly mercenary reasons. More than that, though, he gives parents one more seasonal thing to be gung-ho about, one more obligation to fulfill and then Facebook brag about. So go ahead and put my kids and me on the naughty list, Crumpet, I don't give a crap. Just stay away from my family. And go gift-wrap somebody else's toilet.

Christmas Consumerism Elf On The Shelf