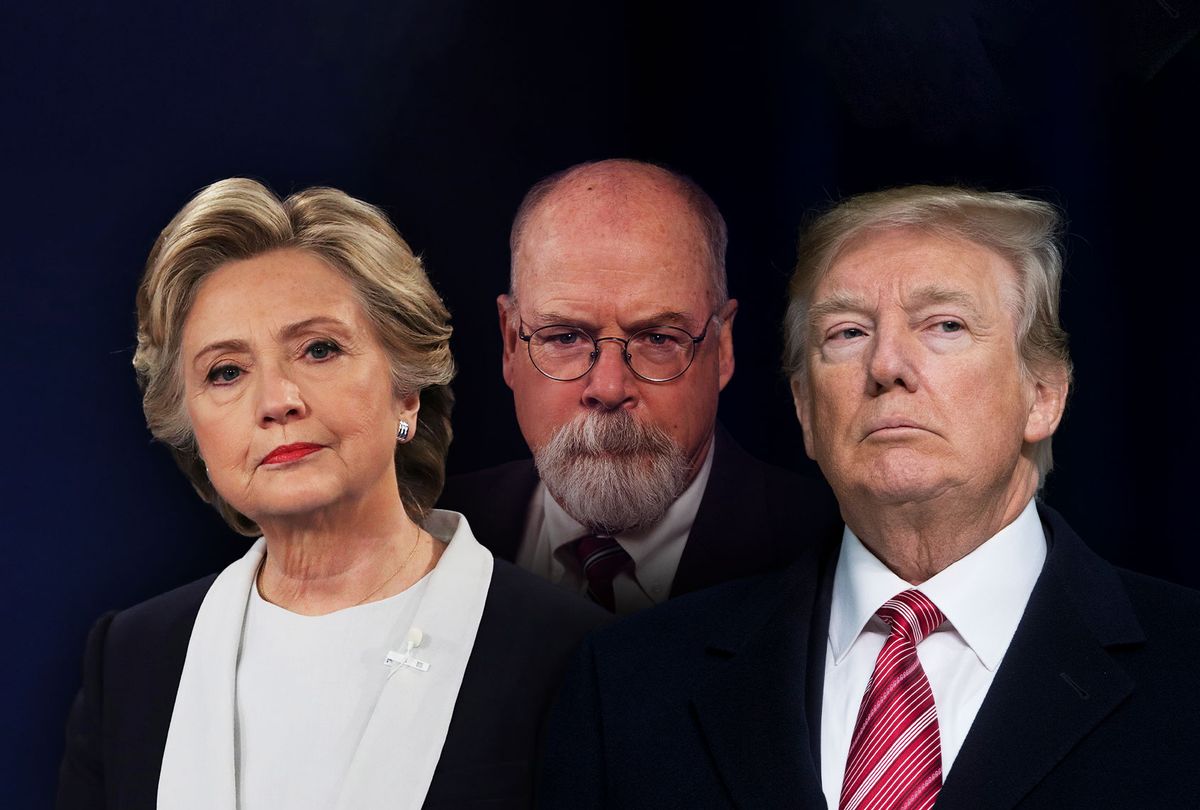 Donald Trump has made no secret of his deep and abiding belief in vengeance as a philosophical principle. From his earliest days as a celebrity businessman in New York, Trump has made it clear that if he believes someone has wronged him he must retaliate. In "Think Big," his 2009 book of business advice, he spells it out:

After his former attorney general, Bill Barr, pompously mischaracterized Robert Mueller's report as exonerating the president of any possible criminal behavior in the Russia probe, Trump and his toadies made it clear that they planned to do just that. For weeks they pushed their mantra that the Russia investigation had been a Deep State plot in collusion with Hillary Clinton and Barack Obama to smear Trump without a shred of evidence. Recall this famous Trump exhortation:

Trump no doubt believed that the FBI was out to get him because he believed that the Department of Justice (DOJ) was loyal to Obama and Clinton rather than him. That's just how he thinks. And those around him who had been infected with various strains of Fox News brain rot also were convinced that Clinton had somehow been let off easy while the DOJ was relentlessly hounding Trump for no reason. It didn't take long for Barr to assign the "oranges" investigation to the U.S. Attorney from Connecticut, John Durham, best known for organized crime cases and an investigation into the Bush administration's torture program that ended in no accountability for those responsible.

That torture investigation began under Bush's last attorney general, Michael Mukasey, who tasked Durham with looking into the destruction of CIA tapes of "interrogation" sessions. Obama's first attorney general, Eric Holder, then expanded Durham's mandate to examine CIA torture allegations. The political establishment and the press saw that bipartisan trust as evidence of Durham's integrity but that investigation was actually a cover-up, which was partially discovered by the Senate Intelligence Committee. They even made a movie about it.

RELATED: Eric Holder: Democracy is worth saving — and justice is coming for Donald Trump

After being appointed to look into the origins of the Russia probe Durham's reputation for integrity unraveled within months when Durham (and Barr) decided to break DOJ protocol and contradict a new inspector general's report finding that the FBI acted appropriately in opening the inquiry into whether the Trump campaign was involved in the Russian campaign to influence the 2016 election. The New York Times reported at the time that even Durham's allies were surprised because "they found it out of character for him to intervene in such a high-profile way in an open case." As the Times observed:

Mr. Durham's decision to speak out seemed to supply political fuel to Mr. Trump, who has repeatedly blasted the Russia inquiry as a "hoax" and a "witch hunt."

In fact, that was the point of the investigation, which is still ongoing after three years. Durham's probe has been political from the start, as much a partisan PR stunt as an investigation, with Barr finally appointing Durham as a Special Counsel on his way out the door to ensure that it would continue under the new administration. It's really just a pathetic attempt to provide the Fox News audience with their own version of "it's Mueller time" that so enthralled the Trump resistance in the early years of the administration.

It was clear from the start that Durham had wildly over-promised.

Aside from one lame guilty plea from an FBI agent who admitted to changing an email, the entire investigation has been pegged to the case he brought against an attorney who worked for a firm that was employed by the Clinton campaign named Michael Sussman. Durham had been hinting broadly in all the court filings for the last six months that he had the goods to prove that Clinton was behind the Russia investigation. (Talk about red meat for the slavering Fox fans!) At one point he even seemed to suggest that Clinton had somehow spied on the Trump White House which was ridiculous on its face and proven to be untrue, needless to say. But it kept the right-wing fever swamp beside themselves with excitement for months Durham was promising that Trump's revenge would be very sweet indeed. Not only would the Russia investigation's origins be shown to have been wrongly predicated, they might just get to "lock her up" at long last.

But two weeks ago the trial against Michael Sussman began and it was clear from the start that Durham had wildly over-promised.

The prosecution's case rested on the single charge that Sussman lied to the FBI when he brought them a tip and said he was not representing the Clinton campaign. They did not come close to proving that, and as it unfolded it was obvious that the whole thing was silly in any case since the FBI had already been looking into the matter at the time. On Tuesday, Sussman was acquitted after a short jury deliberation.

Naturally, the inevitable collective primal scream from the sore-loser right was deafening. Trump took to his Truth Social account and wailed:

Our Legal System is CORRUPT, our Judges (and Justices!) are highly partisan, compromised or just plain scared, our Borders are OPEN, our Elections are Rigged, Inflation is RAMPANT, gas prices and food costs are "through the roof," our Military "Leadership" Woke, our Country is going to HELL and Michael Sussman is not guilty. How's everything else doing? Enjoy your day!!!

His defenders were no less hysterical:

They should all buck up. John Durham isn't through yet. He may never be through. His investigation has already gone on a year longer than Mueller and there's no indication that he plans to quit. And there's no indication that Attorney General Merrick Garland is prepared to get rid of him for cause. He's got one more case coming up in the fall against a researcher who is also accused of lying to the FBI about something arcane and irrelevant. And this one concerns the infamous Steele Dossier! I can hear the champagne bottles prematurely popping already.