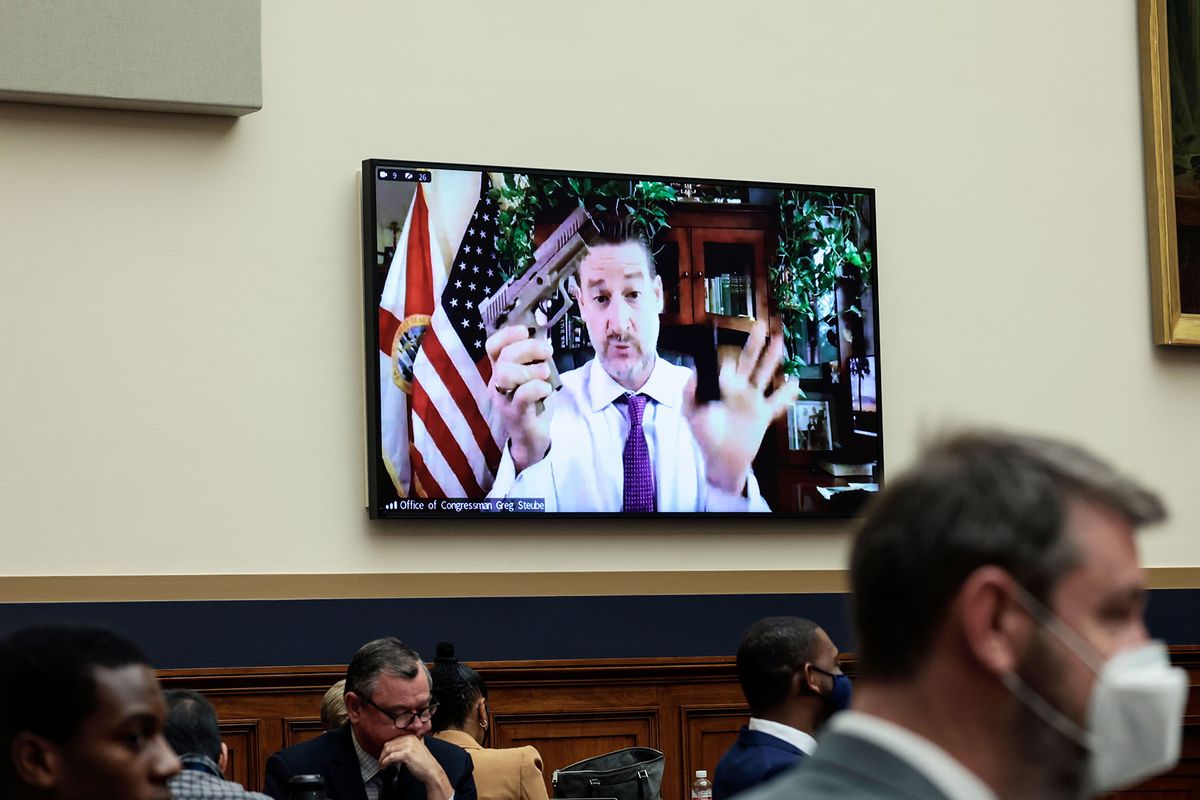 The outlandish display came over video conference, with Steube rattling off all of the different guns and magazines that would be banned under a Democratic-backed gun reform bill currently under consideration by the House Judiciary Committee.

"Here's a gun I carry every single day to protect myself, my family, my wife, my home," he the Republican said, picking up another firearm. "This is a XL Sig Sauer P365 XL [...] This gun would be banned under the Democratic bill."

In response, Rep. Eric Swalwell, D-Ca., said that "this is who Republicans are."

"Kids are being buried and they're bragging about how many guns they own during our gun safety hearing," he tweeted. "They are not serious. They are a danger to our kids."

During the hearing, Steuebe was joined by numerous Republicans who sought to cast the hearing as untimely because the law enforcement response to the Uvalde shooting is still being investigated.

Rep. Andy Biggs, R-Ariz., on Thursday called the proceeding "premature," saying that "visceral reactions sometimes overshadow the statement of facts that we need to discuss."

"We will reveal ... the public is not safer because of the gun control laws. In fact, they are more at risk," he said.

"It is reflexive and it is irresponsible to consider bills while we're still trying to figure out what happened [in Uvalde]," echoed Rep. Matt Gaetz, R-Fla. "[House Judiciary Committee Chairman Jerrold Nadler, D-N.Y.] referenced Uvalde in the first moment of this hearing but yet we're still deciphering key elements of the law enforcement response, of the physical plant, of points of intrusion."

Rep. Jim Jordan, R-Ohio, likewise called it "regretful that Democrats have rushed to a markup today in what seems more like political theater than a real attempt at improving public safety or finding solutions."

The measure, called the "Protecting Our Kids Act," includes a package of eight separate bills that would raise the required purchasing age for semi-automatic rifles, ban large-capacity magazines, and improve safe storage requirements. Nadler has signaled that the Democratic House caucus is hoping to vote on the bill next week. While the measure could pass the House along a party line vote, it is sure to face significant stonewalling from a 50-50 Senate.