Why "Stranger Things" should have let Hopper stay dead 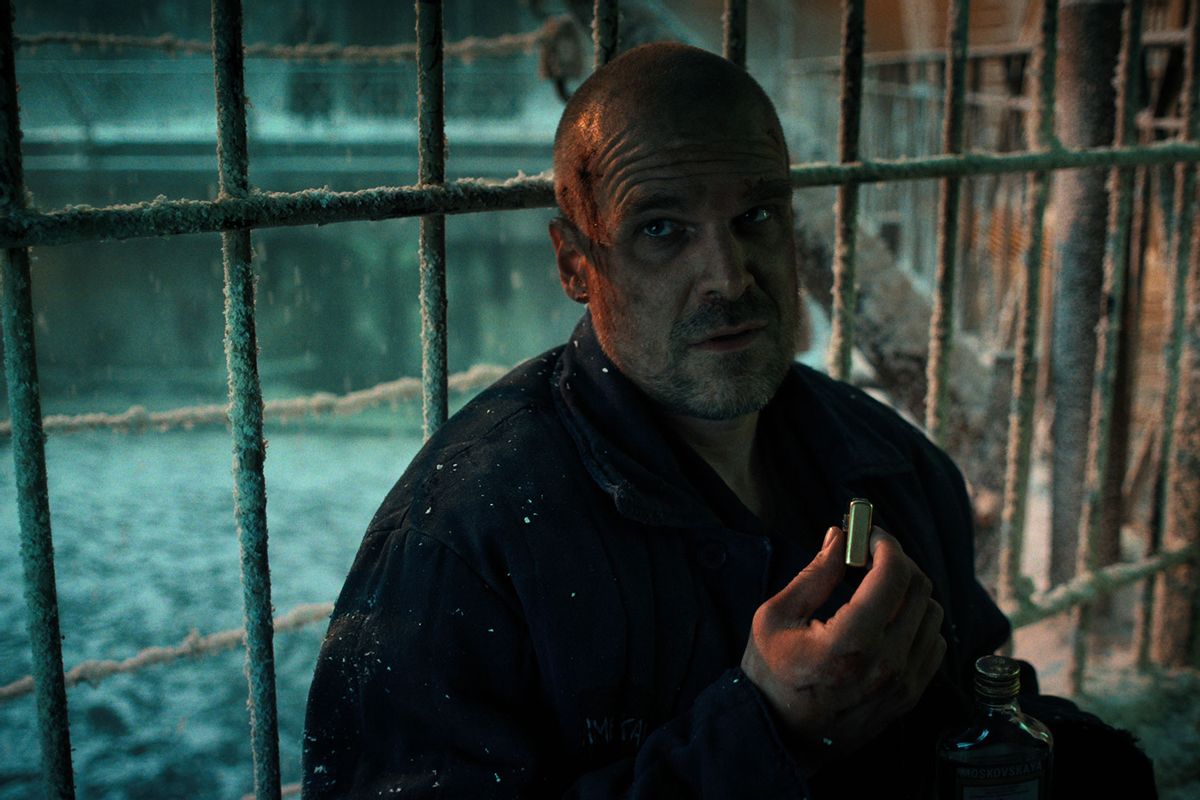 The fourth season of "Stranger Things" is here, and it's the most ambitious yet. The creators have called it their "'Game of Thrones' season" on account of how much it sprawls. We've got one group of characters in Hawkins, we're got Eleven diving into her past, we've got the Byers family adjusting to life in California and we've got Sheriff Hopper trying to escape a Soviet prison. Most of the time "Stranger Things" keeps itself confined to the sleepy, extremely haunted small town of Hawkins, Indiana, but now it's a proper globe-trotting adventure!

And that . . . mostly works out? The season feels slower than it has before, in part because there can be so many stories to juggle that none of them can progress much over the course of one episode. And the stories can vary so wildly in tone — from standard mystery-horror to light comedy to gritty action — that they can feel in conflict with each other.

I have a bad habit of watching shows or movies and starting to think about how to alter the things that annoy me. And when I was thinking of how to address my issues with "Stranger Things 4," the same thought kept occurring to me: Jim Hopper should have stayed dead.

A quick story recap: Jim Hopper (David Harbour) appeared to die at the end of "Stranger Things" season 3, when he was caught in an explosion deep beneath the Starcourt Mall; the Soviets, obviously, had set up a secret laboratory down there where they were trying to punch through to the dark Upside Down dimension. Just another day in Hawkins.

The show committed to Hopper's death, even including a lengthy, tear-jerking epilogue where Eleven (Millie Bobby Brown) finds a letter he wrote but never read to her. It was a great way for Eleven to say goodbye to her father figure and for the show to say goodbye to one of its most important characters. It raised the stakes for the story, letting the audience know that if a character as important as Hopper could die, no one was safe.

. . . only no, because the show couldn't even wait until the start of the fourth season to start teasing that he somehow lived. We got a hint of his survival in a post-credits sequence, and the show outright confirmed that Hopper was alive — and somehow in a Russian prison, no less — with a teaser trailer released online well over two years before the fourth season would hit Netflix.

We finally learn how Hopper survived his brush with death in the second episode of Season 4, "Vecna's Curse." Remember that explosion that engulfed him? Ends up it didn't. He was bruised, but not badly, and was shortly thereafter kidnapped by the Soviets and shipped off to Siberia.

Now, to start, that's a bit of a lame explanation because it's not anything fans could have figured out on their own. When a show dangles a mystery in front of us — say, how did this person survive his own death scene? — the fun is in putting together clues in a way that's difficult but not impossible. Just saying "the explosion wasn't as bad as it looked" is a cop-out.

But whatever, he's back; the real test for the show is to make his resurrection worth it, and I don't think it does. When a show resurrects a character, it spends a lot of narrative capital. "Stranger Things" has already asked us to mourn Hopper's passing, to sympathize with the other grieving characters. If it's gonna bring him back, it better earn it. It better give him something spectacular to do.

I liked some of Hopper's stuff in Season 4 — the gladiatorial fight against the Demogorgon in the finale was particularly fun — but too often his storyline felt like an unneeded appendage sticking out the side of a different show. The gang in Hawkins is trying to fight Vecna, Eleven is trying to get her powers back so she can help them fight Vecna, and Mike is trying to help Eleven so she can help them fight Vecna . . . and then we have Jim Hopper trying to escape a Soviet prison, complete with corrupt guards and snowmobile heists. It was well-acted and well-produced, but I didn't think it fit, and it took away from other stories that did.

I think it did the most damage to Joyce (Winona Ryder), who goes on a quest to rescue Hopper. Joyce was never the best parent, but it's asking a lot of the audience to believe that she would leave behind her family — and the out-of-state teenager she's hosting — to jet off to Alaska to play spy games. This storyline required her to be stupid; see the moment where she leaves the younger kids in the care of her son Jonathan, who she has no idea is baked out of his mind at the dinner table.

Finally, I don't like that resurrecting Hopper will give Eleven someone to lean on just as she's really coming into her own. The mentor figure often dies in stories like this, which is sad but also clears the way for the protagonist to stand on their own two feet and show what they're made of; think of Obi-Wan Kenobi dying in "Star Wars" or Dumbledore biting it in "Harry Potter." By bringing back Hopper, it's almost like the show is giving Eleven a life raft when it should be throwing her in the deep end and seeing if she sinks or swims.

I don't know why "Stranger Things" creators Matt and Ross Duffer chose to resurrect Hopper after making a show of killing him. Maybe they thought his comeback story would be good television, maybe they didn't wanna stop working with David Harbour, maybe they just felt like it. Whatever the reason, I think Season 4 would be better off without him.

And I'm not the only one who thinks "Stranger Things" puts on the kid gloves when it comes to death. Millie Bobby Brown herself opined that the show could stand to knock off a few members of its ballooning cast. "The Duffer Brothers are sensitive sallys who don't want to kill anybody off," she recently said. "We need to have the mindset of 'Game of Thrones.' Kill me off! They tried killing David [Harbour] off and they brought him back!"

She's obviously joking, but it is interesting that the Duffers call this season of "Stranger Things" their "'Game of Thrones' season" and yet it's missing one of the things "Game of Thrones" was most known for: brutal, final death. From Ned Stark to Robb Stark to Catelyn Stark to Tywin Lannister to Stannis Baratheon to Margaery Tyrell, "Game of Thrones" proved over and over that it was willing to kill off characters who were vital to the story and to keep going anyway. And the couple times the show did bring someone back (most famously Jon Snow after his death in Season 5), fans accepted it because we knew it was the exception to the rule; the show had proved many times over that it was capable of following all the way through.

This is one of the things that made "Game of Thrones" so uniquely thrilling, but "Stranger Things" had not picked up on it. And it's even weirder when you consider that the one time "Stranger Things" did actually kill a semi-important character — Barb in Season 1, a death the show is still milking to this day — it got them a ton of notoriety. Why wouldn't they want to double down on that success?

But they haven't. Instead they have clung to their ever-expanding cast, while we at home watch certain in the knowledge that none of the characters are ever in real danger.

And "Stranger Things" is far from alone in this timidity. "Westworld," a prestige drama that hails from HBO, the home network of "Game of Thrones," airs its fourth season later this year, and the trailer gives away that Dolores Abernathy — the main character who sacrificed herself at the end of Season 3 — is somehow back. "Fear the Walking Dead" is currently in the final stretch of its seventh season, which once again stars lead character Madison Clark (Kim Dickens) years after the show left her for dead in Season 4. These shows would love to have the success of "Game of Thrones," but don't seem willing to do what it takes to get it.

Mind you, I'm not saying "Stranger Things" is a bad show because it didn't kill off Hopper. I enjoyed the fourth season, as we explain in great detail here. But I think it could be even better, richer, and more impactful if it had a bit more backbone. I think a lot of TV could.