Uvalde survivor, 11, testifies that she covered herself in another student’s blood to survive

“He shot my teacher and told my teacher good night and shot her in the head,” Miah Cerrillo told Congress 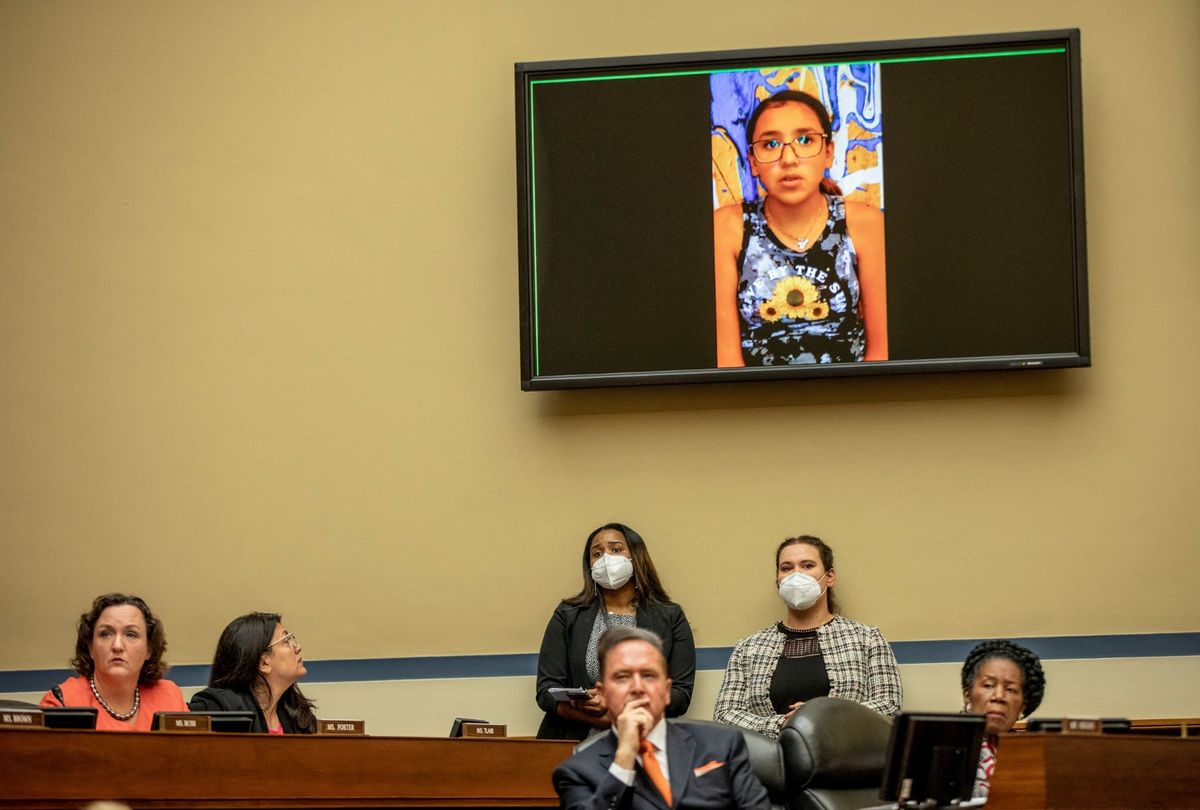 WASHINGTON — Miah Cerrillo, an 11-year-old in fourth grade who survived the school shooting at Robb Elementary School in Uvalde, said she covered herself in another student's blood to trick the shooter into thinking she was already dead.

Cerrillo, wearing a sunflower tank top and her hair pulled back into a ponytail, spoke softly as she answered questions for two minutes on video about what she endured that day in the classroom, just two weeks after she witnessed her friends and teacher die in a deadly school shooting.

"He shot my teacher and told my teacher good night and shot her in the head," she said in the prerecorded video shown at a hearing before the U.S. House Committee on Oversight and Reform. "And then he shot some of my classmates and the white board."

Cerrillo was the youngest of a small group of Uvalde survivors and family members who testified at a U.S. House hearing Wednesday about the devastation wrought by gun violence in their communities.

On May 24, an 18-year-old gunman armed with two assault rifles entered the school building, killing 19 children and two teachers and injuring 17 others.

That day, Cerrillo said she and her classmates were watching a movie. Her teacher received an email and then got up to lock the door — that's when the teacher made eye contact with the gunman in the hallway, Cerrillo said.

At that point, the teacher told the students to "go hide." Cerrillo hid behind her teacher's desk among the backpacks. The shooter then shot "the little window," presumably part of the door to the hallway. She said the gunman entered a neighboring classroom and was able to access her classroom through an adjoining door. That's when he started shooting.

One of the students who was shot, a friend of hers, was next to her among the backpacks.

"I thought [the gunman] was going to come back to the room, so I grabbed the blood and I put it all over me," she said.

She said she "stayed quiet" and then she grabbed her teacher's phone and called 911.

"I told [the operator] that we need help and to send the police [to my] classroom," she said.

Cerrillo added that she did not feel safe in school and did not "want it to happen again." An off-camera questioner asked if she thought a shooting like this will happen again and Cerrillo affirmatively nodded.

Cerrillo was calm and quiet. She didn't cry. But some of the adults from Uvalde who testified wept before the committee, including her father, Miguel Cerrillo, who traveled to Washington to testify in person.

"I come because I could have lost my baby girl, but she's not the same baby girl I used to play with," he said, adding that "schools are not safe anymore."

Kimberly Rubio, a local newspaper reporter and the mother of 10-year-old Lexi Rubio, who died that day, described dropping her children off at the school and attending end-of-school-year awards ceremonies that morning.

Having trouble viewing? Watch this video on texastribune.org.

"I left my daughter at that school and that decision will haunt me for the rest of my life," she said, as she testified in a video recording sitting next to her stone-faced husband, Felix Rubio.

She called for a ban on assault rifles, high-capacity magazines, raising the age to purchase certain guns, keeping guns out of the hands of people deemed to be a risk to themselves or others, stronger background checks and to repeal gun manufacturers' immunity from liability.

"We understand for some reason to some people, to people with money, to people who fund political campaigns, that guns are more important than children," Rubio said. "So at this moment we ask for progress."

Dr. Roy Guerrero, a pediatrician, Uvalde native and graduate of Robb Elementary School, described in the hearing room his encounter with the bodies of two deceased children that arrived at his hospital.

The children's bodies were "pulverized," "decapitated" and "ripped apart." The bullets did so much damage to their bodies that the "only clue as to their identities was a blood-splattered cartoon clothes still clinging to them, clinging for life and finding none."

He added that he and other hospital personnel braced that day for an onslaught of carnage, but it never came because so many of the victims were already dead.

This article originally appeared in The Texas Tribune at https://www.texastribune.org/2022/06/08/uvalde-congress-students-testify-gun-violence/.