Betsy DeVos tries to paint herself as Jan. 6 hero — but she helped bankroll Trump's Big Lie 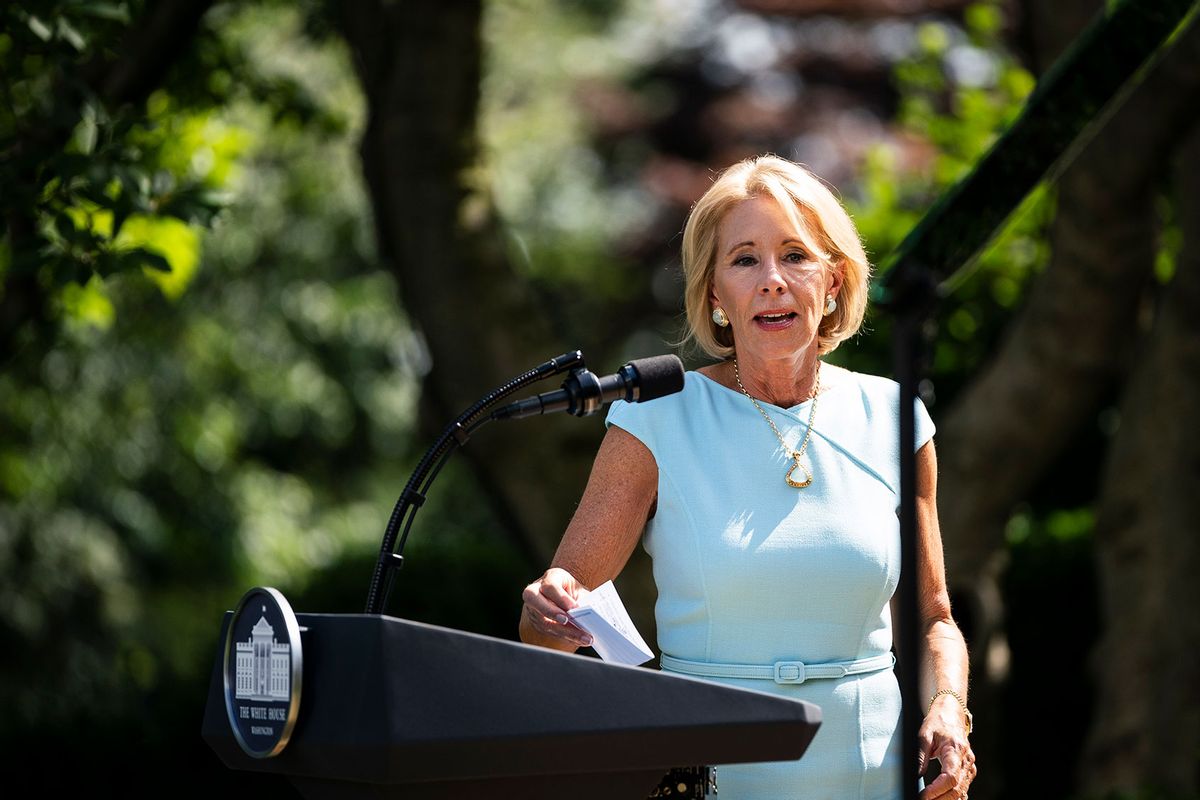 "I spoke with the vice president and just let him know I was there to do whatever he wanted and needed me to do or help with, and he made it very clear that he was not going to go in that direction or that path," DeVos told USA Today. "I spoke with colleagues. I wanted to get a better understanding of the law itself and see if it was applicable in this case. There were more than a few people who had those conversations internally."

RELATED: Why the 25th Amendment is no match for a madman and his party of sycophants

DeVos' remarks back up previous reports that members of Trump's cabinet at one point considered invoking the 25th Amendment, which allows the vice president to usurp the presidency if a majority of the cabinet approves. Ultimately, DeVos and her fellow cabinet members discarded the plan.

DeVos' comments come weeks ahead of her forthcoming release of "Hostages No More: The Fight for Education Freedom and the Future of the American Child," an apparent tell-all recounting her experience helming the Department of Education under Trump.

In the book, USA Today reported, DeVos writes of the Capitol riot that "there was a line in the sand. It wasn't about the election results. It was about the values and image of the United States. It was about public service rising above self. The president had lost sight of that."

DeVos was one of the first Trump officials to step down in the aftermath of the insurrection.

"I went to Washington to do a job on behalf of the American people and particularly for students, and a lot of what happened after the [2020] election sort of put roadblocks in the way of doing any major additional work, so I really felt that everything I could accomplish in office had been accomplished based on that reality and that dynamic," DeVos told the outlet. "And then when I saw what was happening on Jan. 6 and didn't see the president step in and do what he could have done to turn it back or slow it down or really address the situation, it was just obvious to me that I couldn't continue."

RELATED: Last call for the 25th Amendment? Trump's Cabinet won't depose him — but they should

But while DeVos objected to the riot, she was at least in part responsible for bankrolling a broad political campaign to undermine the 2020 election.

According to Rolling Stone, DeVos and her husband, Dick, in 2020 committed at least $620,000 to the Claremont Institute, a right-wing think tank that fanned the flames of Trump's election conspiracies. To boot, Claremont still employs the conservative attorney John Eastman, who devised a legally dubious roadmap to have Congress overturn the election.

DeVos spokesman Nick Wasmiller told the outlet the donations had nothing to do with its support for election fraud lies.

"Claremont does work in many areas," he said. "It would be baseless to assert the Foundation's support has any connection to the one item you cite."

"Were it not for the patronage of billionaire conservatives and their family foundations," Kyle Herrig, president of the watchdog group Accountable.US, told Rolling Stone, "the Claremont Institute would likely be relegated to screaming about its anti-government agenda on the street corner."