Arsenal of autocracy? Major weapons makers cash in worldwide — not just in Ukraine 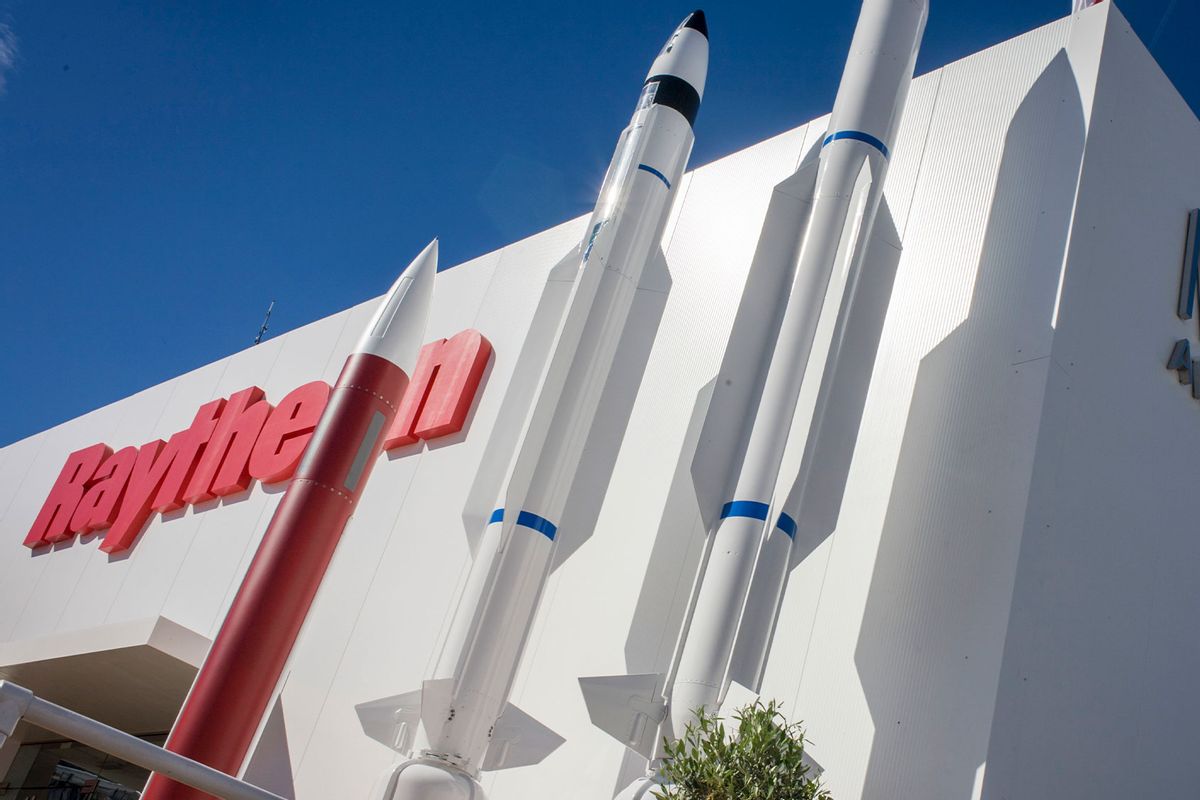 Putting that nightmarish possibility aside, there's another question that comes to mind (mine, anyway): Does arming Ukraine really make Raytheon, Lockheed Martin, and their cohorts "defenders of democracy"?

As someone who has followed Washington's arms production and its global weapons sales for decades now, my answer would be: far from it. At best, those firms are opportunists, selling their wares wherever they're allowed to, regardless of whether their products will be used to push back a Russian invasion of Ukraine or fuel the world's worst humanitarian catastrophe of this century in Yemen.

If they were truly to become part of an "arsenal of democracy," those militarized mega-firms would have to trim their client lists considerably. I suspect, in fact, that if we were looking at their global sales in a more clear-eyed way, we would have to come up with a more apt term for them entirely.  My own suggestion when it comes to Boeing, Raytheon, General Dynamics, Lockheed Martin, and similar firms would be "arsenal of autocracy." Let me explain why I think that term would be all too apt.

Missing News on the Weapons Trade

U.S. weapons contractors aren't exactly fussy about which regimes they send weapons to. Quite the contrary, they seek out as many sales to as many places as the political market will bear.  Those companies also devote considerable time, effort, and (of course) money to expanding their potential markets. They do so in particular by lobbying to lower restrictions on where the U.S. government is willing to promote weapons deals.

Nowhere is the "arsenal of autocracy" moniker more apt than in the case of the war in Yemen, where the United States has sold tens of billions of dollars of weaponry to Saudi Arabia and the United Arab Emirates (UAE) for their grim intervention there.  The results have been horrific — thousands of civilians killed by indiscriminate air strikes (using weaponry from those very companies) and millions on the brink of famine due to a Saudi-led air and sea blockade that has dramatically reduced Yemeni imports of fuel and other essential commodities.  At this moment, a rare two-month, United Nations-negotiated truce between the Saudi-led coalition and the opposition Houthi rebels is about to end. During that truce, air strikes have been limited, but sadly the blockade has largely continued.  And there is a real danger that fighting may resume on June 2nd, at which point U.S.-supplied weapons will once again be the backbone of the Saudi war effort.

The impact of American arms in Yemen has been anything but abstract.  Groups like the Yemen-based Mwatana for Human Rights, as well as Amnesty International and Human Rights Watch, have documented the devastating role of bombs produced by Raytheon, General Dynamics, and Lockheed Martin in air strikes that hit, among other civilian targets, a marketplace, a wedding, and even a school bus. When Amnesty International surveyed 22 arms makers about their role in enabling these Saudi crimes, many of them refused to answer, and those few that did offered variations on the government-let-me-do-it explanation, seeming to suggest that Washington's imprimatur absolved them of any responsibility. They also cited customer confidentiality, as if that somehow justified participating in the slaughter of innocents.

The response from Raytheon was a case in point: "Due to legal constraint [and] customer relations issues… Raytheon does not provide information on our products, customers or operational issues." As Amnesty noted, Raytheon "went on to say that military and security equipment is subject to a government review which includes 'consideration of international human rights and international law.'"

So much for defending democracy. In recent years, U.S. weapons have flowed to other reckless, repressive regimes like the UAE, a partner-in-crime with Saudi Arabia in the war in Yemen, as well as a serial violator of the United Nations arms embargo on parties in the civil war in Libya. Other rogue regimes on the receiving end of U.S.-manufactured arms include Egypt, where the government of President Abdel Fattah al-Sisi has jailed and tortured human rights and democracy advocates and waged a scorched earth counterinsurgency campaign in the northern Sinai desert, killing civilians and displacing tens of thousands of people; the Philippines, where the regime of President Rodrigo Duterte killed thousands under the guise of an anti-drug campaign, including journalists, labor leaders, and land rights activists; and Nigeria, whose military has become notorious for killing and torturing civilians.  And that's not an exhaustive list either.

In none of those cases have any executives in the American weapons-making firms expressed the slightest qualms about their role in fostering human rights abuses and fueling destabilizing, unnecessary conflicts.  And don't hold your breath waiting for questions about such cases the next time an arms industry official speaks to the media.

Even as arms industry executives take cover behind Washington's decisions to weaponize repressive regimes, their companies are working hard to bend the rules in their favor when it comes to who's eligible to receive their products.  Over the past two decades, military firms have spent $2.5 billion on their lobbying efforts while giving $285 million in campaign contributions to key members of Congress, according to Open Secrets, a group devoted to promoting government transparency.  In an average year, the industry employs around 700 lobbyists, or more than one for every congressional representative.

Such industry efforts to influence arms-sales policy are further reinforced by lobbyists for foreign governments that want those weapons.  As my Quincy Institute colleague Ben Freeman has noted, Howard P. "Buck" McKeon, the former chair of the House Armed Services Committee, has worked for Saudi Arabia and Lockheed Martin, both of which have a strong interest in pushing such weaponry out the door with as few questions asked as possible.  Democracy for the Arab World Now (DAWN), Freedom Forward, and other organizations promoting human rights and democracy in the Middle East have placed operatives like McKeon who advocate for repressive regimes in their "lobbyist hall of shame."

One well-documented case study of such lobbying from within the government itself offers a glimpse into how the process works.  Charles Faulkner, a former Raytheon lobbyist, came to serve as a member of the State Department's Office of Legal Affairs during the Trump administration.  In September 2018, he pressed to give Saudi Arabia a clean bill of health when it came to whether or not it was intentionally targeting civilians in its Yemen air strikes.  He won that argument, which laid the groundwork for a sale of Raytheon precision-guided bombs to the Saudis to move forward.  Then, in the spring of 2019, Faulkner sparked concern among lawmakers over his apparent role in crafting a plan to use emergency procedures to make an end run around Congress when it came to a package of weaponry destined for Saudi Arabia, the UAE, and Jordan.

Detailed examples like that are hard to come by because the arms industry does so much behind closed doors.  It's important to note, however, that the weapons makers don't always win the day.  When Raytheon's then-CEO Thomas Kennedy showed up at the office of Senate Foreign Relations Committee Chair Robert Menendez (D-NJ) to press him to lift a hold on a Raytheon deal with Saudi Arabia, he was rebuffed.  Menendez summarized his response to Kennedy this way to a New York Times reporter:

In short, lobbying doesn't always work, which is one reason the industry puts so many resources into it.

Stemming the Flow of Arms to Autocracies

Despite their lobbying power, weapons makers are facing significant resistance to their efforts to keep the weapons flowing to regimes like Saudi Arabia and the UAE.  During the Trump years, bipartisan majorities voted to end military support for the Saudi armed forces under the War Powers Act and to block a sale of precision-guided bombs to the Kingdom, only to have those measures vetoed by President Trump.

Representatives Pramila Jayapal (D-WA) and Peter DeFazio (D-OR) will be introducing a new War Powers Resolution in hopes of changing the Biden administration's policy of continuing to arm Saudi Arabia and the UAE. In doing so, the president and his officials have ignored their earlier criticisms of the Saudi regime and its de facto leader Mohammed bin Salman who launched the war in Yemen in 2015 and was implicated in the 2018 murder of Saudi journalist and U.S. resident Jamal Khashoggi.

There are also bills in the works to "flip the script" on arms-sales decision-making. These would require congressional approval for major sales, thereby preempting the ability of the president to veto efforts to block specific deals.  Such initiatives represent a high-water mark in Congressional efforts to restrict runaway arms sales since the passage of the Arms Export Control Act in 1976, more than four decades ago. Will they succeed in the Ukraine war moment when the weapons industry is riding so high and proclaiming its good deeds all too loudly?

It's hard to say since this country has long been working to create and support global arsenals of autocracy.  If the arms industry were truly focused on "defending democracy" on this planet, its firms would have already allowed the above-mentioned reforms to go through without objection, or even, heaven forbid, supported them. The fact that they won't do so tells you all you need to know about their true intentions in what is for them a genuine gold-rush moment.

William D. Hartung is director of the Arms and Security Project at the Center for International Policy and the author of "Prophets of War: Lockheed Martin and the Making of the Military-Industrial Complex."