A month after Buffalo: Is white America ashamed — or has it already forgotten?

White supremacist delusions that drove Buffalo shooter are now in the GOP mainstream. So much for a reckoning 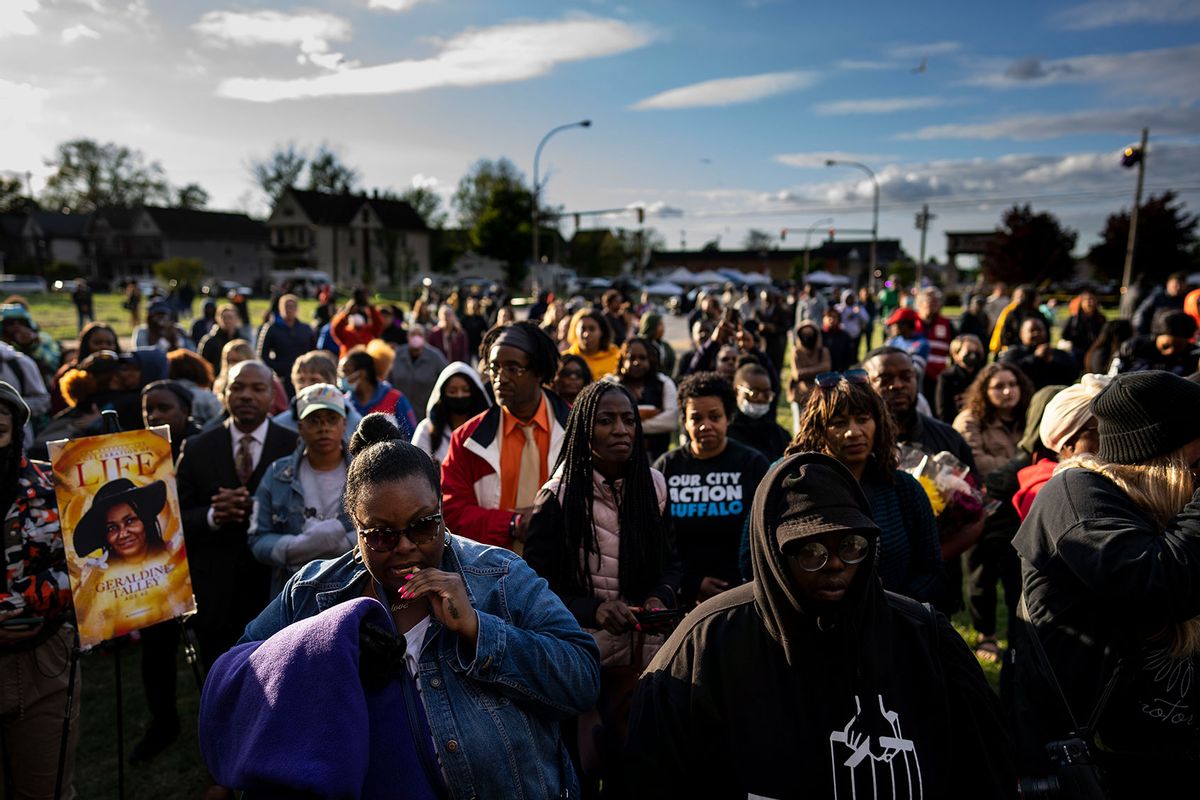 People attend a vigil across the street from Tops Friendly Market at Jefferson Avenue and Riley Street on Tuesday, May 17, 2022 in Buffalo, NY. (Kent Nishimura / Los Angeles Times via Getty Images)
--

On May 14, an avowed white supremacist killed 10 Black people at a supermarket in Buffalo. If that evil act has not precisely been forgotten, it has been all but washed away by the onrushing torrent of the news cycle. For Black people, Buffalo offered one more example of existential terror, one more illustration that Black people in America cannot safely do the most mundane things without facing the danger of racist violence.

The alleged murderer shouted racial slurs while using his AR-15 assault-style rifle to kill Black people while they shopped for groceries. He attempted to livestream the massacre as a kind of white supremacist snuff film. The killer also transformed his assault-style rifle into a totem and fetish object: It was inscribed with the names of other white supremacist terrorists whose deeds he admired and was now imitating.

The apparent Buffalo shooter wrote a so-called manifesto, a 180-page document where he offered his explanation for the "reasoning" behind his mass murder: He claimed he was trying to "protect" the "white race" from "extinction" or "annihilation" by Black and brown people. Nothing about these claims was new; the document was a rehash of boilerplate white supremacist thinking, decades or centuries old.

RELATED: Buffalo: This is where Donald Trump's race-war fantasies lead

As I argued in an earlier essay at Salon, the Buffalo shooter's manifesto channeled, almost verbatim, the types of language and beliefs circulated on an almost daily basis by Fox News, Donald Trump, numerous leading Republicans and the "conservative" movement and white right more generally:

[It] reads like a script from Tucker Carlson's Fox News show. That is not a coincidence. Carlson and other Fox News personalities are radicalizing their viewers into white supremacy and other forms of right-wing political extremism. The process is strikingly similar to the radicalization process used by ISIS as it recruits and indoctrinates its followers into committing acts of Islamic terrorism.

The white supremacist "great replacement" conspiracy theory is not "stupid" or "silly" or any of the other dismissive adjectives used by too many liberals and others to minimize its power. In various forms, the white supremacist "great replacement" conspiracy theory has shaped the modern world through colonialism, imperialism, genocide, chattel slavery, pogroms, the theft of wealth and resources and other racial projects that have directly or indirectly caused the deaths of tens of millions of nonwhite people around the world.

Don't call the "great replacement" theory stupid or silly. Don't minimize its power. In various forms, it has shaped the modern world.

In his book "'Exterminate All the Brutes'," Sven Lindqvist famously observed: "Everywhere in the world where knowledge is being suppressed, knowledge that, if it were made known, would shatter our image of the world and force us to question ourselves — everywhere there 'Heart of Darkness' is being enacted."

Within less than a month, the Buffalo massacre has largely been forgotten by America's mainstream news media, white opinion leaders, and the white public as a whole. White America is entirely too comfortable with Black and brown people's misery, pain and death — and has used it as the scaffolding for a larger culture of cruelty, oppression and exploitation.

In a recent essay for ScheerPost reprinted at Salon, Chris Hedges observes:

White people built their supremacy in America and globally with violence. They massacred Native Americans and stole their land. They kidnapped Africans, shipped them as cargo to the Americas, and then enslaved, lynched, imprisoned and impoverished Black people for generations. They have always gunned down Black people with impunity, a historical reality only recently discernible to most white people because of cell phone videos of killings. ...

Historian Richard Slotkin calls our national lust for blood sacrifice the "structuring metaphor of the American experience," a belief in "regeneration through violence." Blood sacrifice, he writes in his trilogy "Regeneration Through Violence: The Mythology of the American Frontier," "The Fatal Environment: The Myth of the Frontier in the Age of Industrialization" and "Gunfighter Nation: The Myth of the Frontier in Twentieth-Century America," is celebrated as the highest form of good. Sometimes it requires the blood of heroes, but most often it requires the blood of enemies. This blood sacrifice, whether at home or in foreign wars, is all too often racialized.

Has the Buffalo massacre led to a collective reckoning or great awakening for white America, finally willing to purge its racism and its allegiance to white supremacy? It has not. In post-civil rights America — especially since the rise of Trump — we no longer hear the pretense that we need a "national conversation on race," in Barack Obama's famous phrase. For many Republicans and Trump followers, overt white supremacy and racial authoritarianism have been mainstreamed, franchised and laundered into something positive and noble in the alternate reality of MAGA World.

Did the massacre in Buffalo (and the massacre of children only days later in Uvalde, Texas) force a sane response to America's sick gun culture, where an 18-year-old person can buy assault rifles and other weapons of de facto mass destruction but cannot buy an alcoholic drink? By no means.

We may see some modest gun reforms emerge from Congress, but they will change little. The gun industry, the NRA, Federalist Society judges, right-wing interest groups and organizations, the small proportion of white men who own the vast majority of guns in America, the Republican Party and the right-wing "Christian" churches have the American people in a literal death grip.

Did Republicans and Trump supporters feel shame and disgust about themselves when they learned that the terrorist who killed 10 black people in Buffalo shared their delusional beliefs about white people being "replaced" or "oppressed" in America? Of course not. If anything, the Buffalo attack appears to have reinforced their commitment to protecting white privilege and white power by any means necessary.

A new Yahoo News/YouGov poll conducted from May 19 to May 22, only days after the Buffalo killings found that 61% of Trump voters believed in the central claim of the "great replacement" theory that "a group of people in this country are trying to replace native-born Americans with immigrants and people of color who share their political views." Fewer than one in four Trump voters disagreed with that statement. Virtually identical majorities of both Republicans and Fox News viewers (54% and 53%, respectively) agreed with the claim.

Did conservatives feel ashamed or disgusted to learn that the Buffalo terrorist shared their delusional beliefs about white people being "replaced" or "oppressed"?

There is no substantive evidence to support such beliefs: White people control every major social, economic and political institution in America. Other research has repeatedly shown that white victimology is highly correlated with support for Trump, other types of anti-Black and anti-brown racial animus, and "old-fashioned" racism and bigotry as well.

Large majorities of Trump supporters and Republicans (69% and 66% respectively) reported that they were either very or somewhat concerned that "native-born Americans are losing economic, political, and cultural influence in this country to immigrants."

Social scientists have repeatedly shown that a belief in the "great replacement" theory and its associated claims is also connected to support for right-wing political violence, racial authoritarianism, fascism, conspiracy theories and other anti-democratic ideas and behavior. Another new poll, this one conducted in April by the Southern Poverty Law Center (SPLC) and Tulchin Research, found that while a plurality of Americans had "a positive view of the country's changing demographics," that was not true for Republicans, "a majority of whom viewed those changes not only negatively, but as a threat to white Americans":

That belief was also "correlated with other conspiratorial beliefs":

Over three-quarters of those who believe the 2020 presidential election was "fraudulent, rigged and illegitimate" also at least somewhat agree that liberals are replacing conservative white voters, while 75% of those who believe the government is using the Jan. 6 insurrection to justify the political persecution of conservative Americans also agree with the replacement conspiracy….

Right-leaning Americans are more likely to view movements aimed at building an equitable society, including feminism and the Black Lives Matter movement, as threatening. Many believe that elements of today's political environment — including the 2020 racial justice protests and demographic changes — unfairly malign or threaten white people. This is combined with pervasive distrust of democratic institutions and feelings that more conservative Americans are being persecuted by the government and the political left.

With the beginning of televised public hearings by the House Jan. 6 committee, this finding is especially noteworthy:

While each side views the other as similarly threatening, Republicans rank "extremists in the Democratic Party" as the most pressing threat facing the country, while Democrats believe the top three threats, in descending order, are Vladimir Putin, Donald Trump and extremists in the Republican Party. ... When asked whether they believed that "some violence might be necessary to protect the country from radical extremists," 41% of Republicans agreed, compared to 34% of Democrats and 29% of independents. Over half of Republicans say the country seems headed toward a civil war in the near future, compared to 39% of Democrats.

This new polling data reinforces once again that today's Republican Party (along with the larger "conservative" movement) has become the world's largest white supremacist and white identity organization. Based on its increasing support for right-wing political violence, the Republican Party is now a de facto terrorist organization as well.

Whatever nomenclature that is used to discuss the "great replacement" white supremacist conspiracy theory, its core tenets are simple and predate the founding of the United States. In that sense, Donald Trump's slogans about "America first" or making America "great again" are just restatements of the old principles of herrenvolk democracy with its "white freedom", "white power" ideologies and Chief Justice Roger Taney's infamous decision in the Dred Scott case that Black people had "no rights which the white man was bound to respect."

According to that worldview and white racial logic, America is first, foremost and most fundamentally a white man's (and white woman's) country. Everyone else is just a guest. White supremacy may put on different robes and masks. It may wear suits and ties, dresses and pantsuits, chinos and polo shirts. But it remains a constant in American history.

Read more on the Buffalo massacre and the threat of political violence: