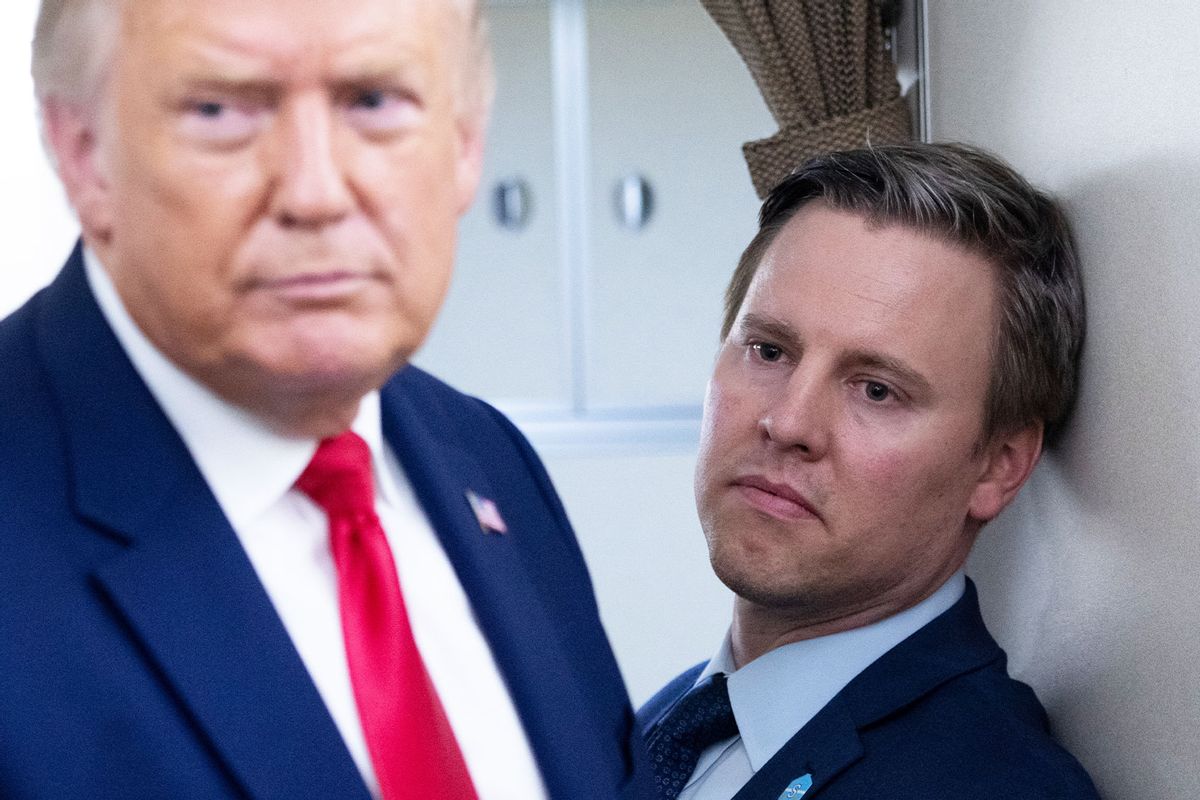 Campaign manager Bill Stepien stands alongside US President Donald Trump as he speaks with reporters aboard Air Force One as he flies from Manchester, New Hampshire to Joint Base Andrews in Maryland, August 28, 2020, following a campaign rally. (SAUL LOEB/AFP via Getty Images)
--

It's hard to reconcile the sworn testimony offered by former Trump campaign manager Bill Stepien before the House Jan. 6 select committee with what I heard from him as the headliner on a hastily convened fundraising teleconference about a week after the 2020 election.

Before the House committee, Stepien presented himself as the earnest, sober and honest campaign professional, proud to be labeled as "Team Normal" as opposed to Rudy Giuliani's team, which generated one outlandish false claim after another. Stepien told the panel he chose to step away at an unspecified time after the election because Trump's campaign of disinformation wasn't "necessarily honest or professional."

Well, he was still on the job back on Nov. 11, 2020, and sounded like a true believer in the Big Lie about widespread voting fraud that Trump had been spouting as early as April of that year, months before the election.

"You know the things with bundling and all of the things that are happening with votes by mail where thousands of votes are gathered," Trump said in April. "And I'm not going to say which party does it, but thousands of votes are gathered and they come in and they're dumped in a location. And then all of a sudden, you lose elections that you think you're going to win."

Stepien was certainly aware of Trump's strategy when he came to the rescue of the president's floundering campaign in July. And he certainly projected a sense of legitimacy to Trump's claims during that teleconference eight days after the election. It would be up to the donors on the call, he suggested, to help Trump protect his historic win.

I remember dialing in that night and being struck by the tone of the call. It felt like a crusade, a call to arms, aimed at bending the arc of history.

Steinhardt defiantly declared it wasn't up to the news media to determine who won the election.  My InsiderNJ colleague Fred Snowflack was monitoring the call and reported how those who dialed in were told there was a Trump campaign war room with 50 staffers following up on alleged voting irregularities.

"Stepien reiterated some of the complaints we have heard since Nov. 3 – namely that Republican observers were not allowed to oversee the ballot count and a suspicion that mail-in ballots may not have been handled properly. There was talk about ballots being counted in the 'dead of night,'" reported Snowflack.

"That's why we're staying in the fight," Stepien declared on Nov. 11.

Stepien testified before the House select committee, however, that as "each day that wore on" after the election, "we paid attention to those numbers every single — multiple times a day, you know. Internally, you know, I — I was feeling less confident, for sure."

As it turns out, the post-election fundraising hosted by the New Jersey GOP was just one part of the massive effort that helped to fund the Jan. 6 organizing effort and rally, before many of the attendees stormed the U.S. Capitol.

"The claims that the election was stolen were so successful President Trump and his allies raised $250 million, nearly $100 million in the first week after the election," said Amanda Wick, the committee's senior investigative counsel, in a videotaped segment played on Monday. "On Nov. 9, 2020, President Trump created a separate entity called the Save America PAC. Most of the money raised went to this newly created PAC, not to election-related litigation."

Wick continued. "The Select Committee discovered that the Save America PAC made millions of dollars of contributions to pro-Trump organizations, including $1 million to Trump chief of staff Mark Meadows' charitable foundation, $1 million to the America First Policy Institute, a conservative organization which employs several former Trump administration officials, $204,857 to the Trump Hotel Collection and over $5 million to Event Strategies Inc, the company that ran President Trump's Jan. 6 rally on the Ellipse."

So far, it appears that Stepien, who took the Fifth Amendment during the New Jersey legislature's Bridgegate probe, is still benefiting from his time  in the Trump vortex priming the pump of the Big Lie.

Stepien's firm is still being paid $10,000 a month by Trump's Save America committee, and has collected $1.2 million "from an all-star cast of pro-Trump election liars."

"Stepien's National Public Affairs firm is currently paid $10,000 a month from Trump's Save America committee, receiving a total of $130,000 since last May, and taking in another $90,562 from Trump's reconfigured presidential campaign," according to a HuffPost analysis of Federal Election Commission filings. "He has also collected an additional $1.2 million from an all-star cast of pro-Trump election liars, including $190,488 from Harriet Hageman, who is trying to unseat Wyoming congresswoman and Jan. 6 committee vice chair Liz Cheney in the August Republican primary."

Would Jan. 6 have happened the way it did if Stepien had come forward before that day? We will never know.