Elegy for a lost America: Will the Jan. 6 committee really change anything?

I listened to the first hearing driving through Trump country. Production values were great! But that's about it 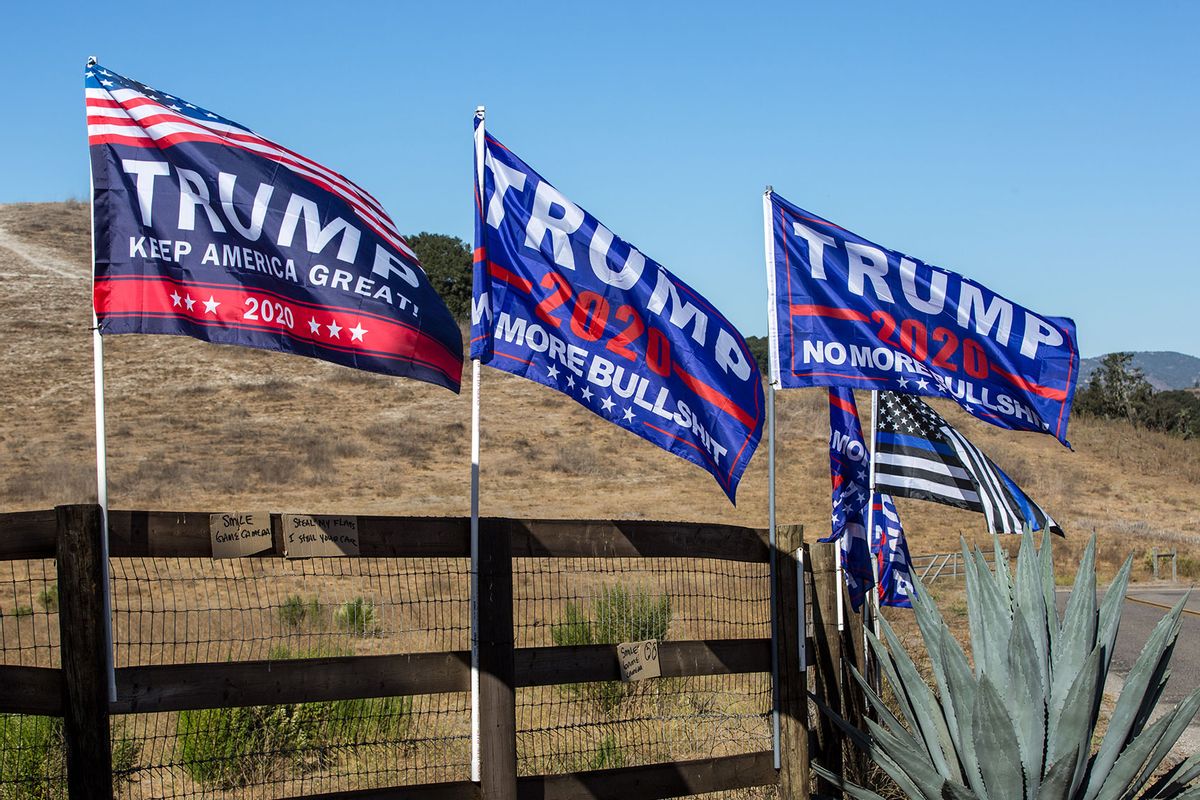 A display of "Trump 2020" flags adorn the entrance to a cattle ranch on the outskirts of town on November 2, 2020, in Solvang, California. (George Rose/Getty Images)
--

On cable news they called Thursday night's first hearing of the House Jan. 6 committee "somber," and "powerful." I listened instead of watched, driving through the darkening early summer evening on the first day of a cross-country drive with my 13-year-old. An elegant old road, Route 20 across upstate New York. Farms and fields and haunted Victorians, broken silos and dead motels, their doors banged open amidst a pale tide of Queen Anne's lace and purple lupine and the ghost yellow false bloom of wild parsnip, which stings before it burns. So maybe it was the fact that via satellite radio I could hear but not see the presentation, or maybe it was the setting, but to my ear the tone of the first hearing was elegiac. A lament, an expression of longing, a wish that it had been and will be otherwise, threaded with the knowledge that it likely will not. There's little chance the hearings will result in even some small justice, much less bind the nation back into the functioning democracy that in truth it never has quite been.

"An audience of one," said CNN's Anderson Cooper, an echo of the phrase applied so often to the former president that New York Times critic James Poniewozik titled his book on the 45th president "Audience of One: Donald Trump, Television, and the Fracturing of America." But according to Cooper the "one" on Thursday was Merrick Garland. Who, it was reported, would watch "as much as he was able." Perhaps he had another obligation. Or maybe he just wanted to catch up on "Stranger Things."

"Halloween costume after Halloween costume," droned Bob Woodward, speaking of the insurrection. "This is not a joke," he assured us, attempting to summon, once more, the gravitas of Watergates past. But it is a dull one, second time farce. Not because the hearing was not well-produced, but because we are left with little more to do but admire its production values. Not because Liz Cheney failed to play her part as conservative-with-a-conscience, but because we know that this has become an obsolete role. Not because Bennie Thompson, and brave Officer Caroline Edwards — "slipping in people's blood," she remembered, "catching them as they fell" — did not speak true but because they did. Then, after the hearing, Laura Ingraham, who at 2:33 p.m. on Jan. 6, 2021, text-fretted to Trump's chief of staff that "we lose all credibility… if things go South," brought onto "The Ingraham Angle" the grieving aunt of a "persecuted" January Sixer who "loved animals" and who pled guilty to four counts before hanging himself in advance of his sentencing, which was to have taken place last April Fool's Day.

I clicked back and forth between stations as I drove, between one martyr and another, "theirs" and "ours." Which is not, of course, to say "both sides." Officer Brian Sicknick — "ghostly pale," recalled Officer Edwards, who, let's be honest, made great television — died of a stroke shortly after he was injured defending the Capitol, while Ingraham's subject committed suicide because "his heart broke and his spirit died" after the FBI caught him. He had promised on video that the insurrection was "not over," but then, for him, it was.

But for us it isn't. My 13-year-old and I passed the miles by keeping count of the flags: the Stars and Stripes drained of color but for the one blue line, a flag marketed as a police rebuttal to Black Lives Matter; the coiled snake-on-yellow of the Gadsden "Don't Tread on Me" flag and its variations, such as a "Don't Tread on Trump" flag beneath a big white cross and beside a display of hummingbird feeders for sale; the red "Trump Nation" flag, the pink "Women for Trump" flag, the blue Trump "Save America Again" flag and the black flag of Trump-as-Rambo, ready to save us with his assault rifle. The Confederate flag, the Confederate flag overlaid with an assault rifle and all the many varieties of "Fuck Joe Biden." We lost count.

My 13-year-old and I passed the miles counting flags: Blue Lives Matter, the coiled snake-on-yellow, "Trump Nation," "Women for Trump," the Confederate flag and endless variations on "F**k Joe Biden."

My 13-year-old fell asleep sometime during one of the hearing's later video presentations. Absent the visuals — or perhaps because of the visuals around us, the ruined beauty and the passing tick-tock of fascist display — the videos were mostly the white noise (emphasis on white) of rage. The hearing, appropriately, did not address this rage, did not seek to account for it but to hold it accountable. But it can do neither. Instead, for all of its precision and sorrow, the hearing could only measure the smallness of the question left to it to answer: What happened on Jan. 6, 2021? What is happening now meanwhile, with American fascism strangling backroads like knotweed or kudzu, the number of Republicans who believe Biden stole the election rising even as the number of everyone else with faith that he can win the next one slides, the very concept of "numbers," in the sense of a democracy's majority rule, increasingly in doubt — all this the hearing could not speak to.

There was a sense, especially as I listened to the Wyoming laconic of Liz Cheney settling scores (Kevin McCarthy, she noted, said he was "quote-scared-unquote") of at best laying down a marker for history. At one point Cheney noted that the insurrection raged before a painting of George Washington "voluntarily relinquishing power." A "noble act," she insisted.

I could almost hear Trump in front of his TV in Mar-a-Lago, sneering at the first president: "What a loser." George Washington, Liz Cheney, all of us watching and listening to the hearings as if the illness Trump made fully manifest — the many-colored hate flying in the night breeze along this highway — might still somehow be quarantined to that one terrible day in January.

Jeff Sharlet is a professor of English at Dartmouth College and the bestselling author of seven books, including "This Brilliant Darkness," "C Street" and "The Family."