Bill Barr's a survivor — he clearly thinks Trump is toast. Rudy Giuliani, drunk or sober, is going under the bus 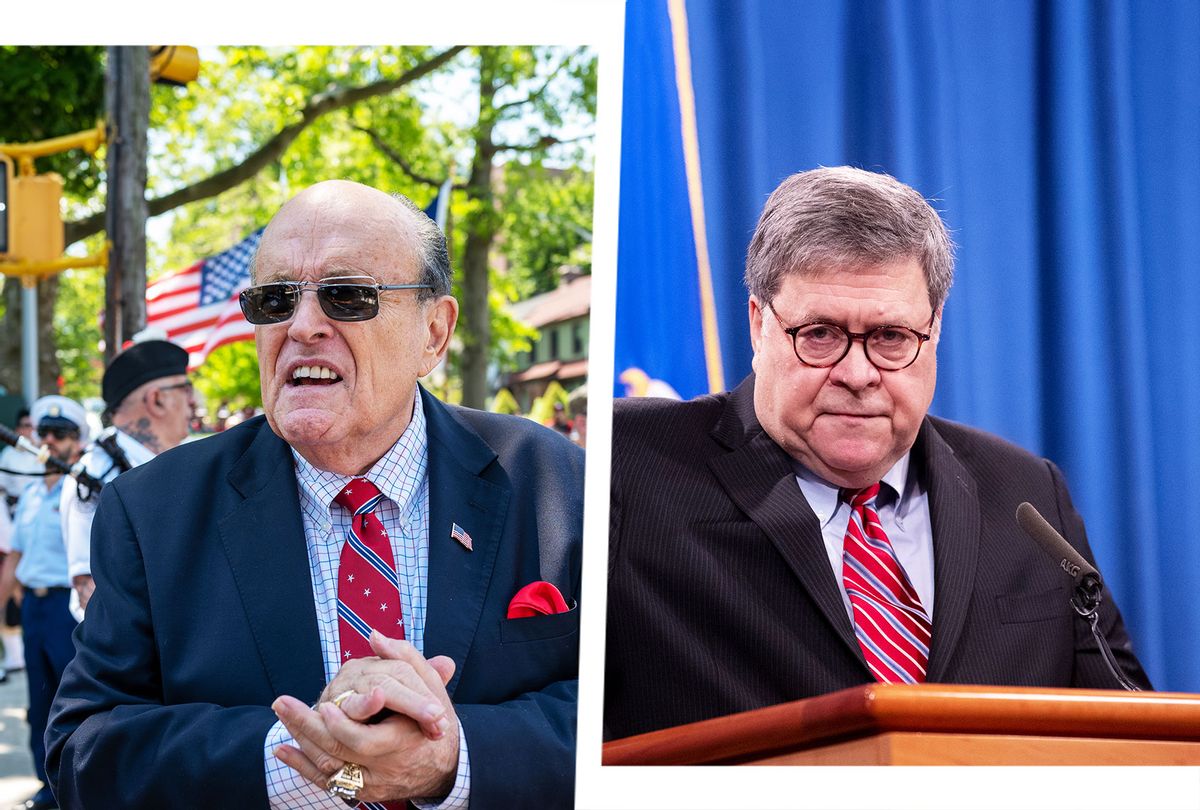 On the first day of the Jan. 6 select committee hearings — a primetime spectacular produced by prosecutors, politicians and television executives and pooh-poohed by poltroons — Donald Trump chose the moment to send emails to his followers encouraging them to buy "Limited Edition" Trump commemorative golf balls.

What was the former president commemorating? Why, the alleged hole-in-one Trump claimed in a recent golf outing, of course.

By the second hearing, Rep. Zoe Lofgren of California took center stage to speak about Trump's continuing "Big Lie" and then outlined his "Big Ripoff," highlighting how Trump bilked his supporters for cash in a quest to challenge the results of the 2020 election.

Lofgren also disclosed on Monday how Turning Point Action, a conservative pro-Trump organization, had paid Kimberly Guilfoyle $60,000 to introduce her fiancé, Donald Trump Jr., in a speech that lasted less than three minutes at the "Stop the Steal" rally at the Ellipse in Washington on Jan. 6, 2021.

Lofgren also told Jake Tapper of CNN that the House select committee investigation into the insurrection has uncovered evidence that Trump's family members personally benefited from money raised based on Trump's "Big Lie."

The Trump campaign, Lofgren said, "used these false claims of election fraud to raise hundreds of millions of dollars from supporters who were told their donations were for the legal fight in the courts. But the Trump campaign didn't use the money for that. The Big Lie was also a big ripoff."

As if to underscore Trump's continued grifting, even as Lofgren spoke at the hearing, the ex-president was busy reminding everyone about his upcoming birthday: for a small donation of $75, he would gladly provide an autographed smiling photo of himself as president.

Lofgren's pointed presentation was meant to open the door to criminal fraud charges against Trump, his company and members of his family. But wait, there's more. During the Monday hearing we were also introduced to  "Drunk Rudy" and Trump's claims about "massive dumps" — of supposedly illegal votes, of course. This was fodder for the talk-show circuit, with Stephen Colbert taking a razor-edged approach to those "massive dumps" and describing Trump's answer to my September 2020 question about a peaceful transfer of power as "Exhibit A-hole."

Trump is consistent in his hustle. Give the guy that. He's got the energy and imagination of a Tony Montana — but fewer and fewer want to say hello to his "little friend."

In case anyone missed the overall story arc of the first two hearings, here it is: Trump planned and executed the insurrection — and took advantage of the chaos to try and remain in office.

This isn't new information. When Michael Cohen, Trump's former personal attorney, testified before Congress in February 2019  he warned the world: "I fear that if he loses the presidential election in 2020, there will never be a peaceful transition of power."

We heard the very same thing from Donald Trump himself on Sept. 23, 2020, just six weeks before the election, when he declared that if you just stop counting ballots (when they favor him, of course), "there'd be no transition." He did not commit to a peaceful transfer of power when I asked him directly. That wasn't supposition. That was the president speaking for himself, laying the groundwork for the insurrection, telling us for the very first time – live – that he had no respect for democracy and intended to stay until he wanted to leave.

But now it's 2022 and many of us apparently have forgotten those events. I suppose that's why the early hearings have dedicated so much time to going over territory many of us have already traveled Yet, that trip has had its surprises.

Jason Miller showed up as the "masked witness," a side character in the second episode. A longtime Trump confidant, Miller testified that Rudy Giuliani was acting inebriated on election night. It was then, Miller and others testified, that Giuliani began spreading the seeds of the Big Lie.

Bill Stepien tried to outline two camps in Trump's inner circle: Team Normal (led by him) and Team Drunk Rudy. But there was nothing normal about the Trump White House.

Trump, Stepien and Miller's close professional relationship stands as testimony that Trump probably knew everything both men intended to say. After all, they are still with him, in various capacities. So the question is: Did Trump suggest their testimony regarding Giuliani? It matters little in the end because Trump will certainly exploit it. Rudy is destined to be the next Michael Cohen. He'll be ground under the bus; either indicted or forced into surrendering for a mental inquest that will reveal the hallucinogenic chemicals in his hair treatment.

Time after time in Monday's hearing, the questioning circled back around to Giuliani. He's going to be Trump's last-gasp defense before the Donald is finally cornered with nowhere to run. Trump's daughter has "checked out" and Rudy was drunk. Bill Barr, according to Trump, is a big RINO loser and everyone, I mean everyone, who has turned on Trump is a big-old poopy-pants. Only he can save us.

Barr is certainly singing a different tune these days, calling Trump's claims of voter fraud complete "bullshit." As recently as several weeks ago, Barr said he'd vote for Trump again. But apparently there is no one in Trump's inner circle who supports the claim that the election was stolen — except Donald Trump.

Team Normal? How could there be a Team Normal inside the Trump White House?

That isn't a rhetorical question, as Homelander of "The Boys" might say.

But as "Jan. 6: The Limited Series" unfolds, it is becoming increasingly apparent where the narrative is leading us. Trump is a traitor, and it seems that Rep. Liz Cheney has him squarely in her sights. Hopefully she's a better shot. metaphorically speaking, than her father was in reality.

It is also obvious that the hearings are meant to point toward the prosecution of Trump on a variety of criminal charges, including fraud.

Trump will use Rudy Giuliani to take the fall for everything. Michael Cohen knows how this works. "Of course he'll throw Giuliani under the bus," he told me.

And as I suggested earlier, it's also clear that Trump will use Giuliani to take the fall for everything. The precedent is already established. Trump threw Michael Cohen under the bus successfully; both Trump Organization CFO Allen Weisselberg and Trump himself continue to blame Cohen for the ongoing investigation into Trump's privately held company.

Manhattan District Attorney Alvin Bragg has denied that, saying in a recent filing: "Indeed, the claim that [Cohen] sparked this Investigation as part of a vendetta resulting from Weisselberg's immunized testimony is incorrect."

Cohen recently told me that there's little doubt what the Trump plan is. "He never accepts responsibility for anything that he does," Cohen said. "Of course he'll throw Giuliani under the bus. He'll throw anyone under the bus to save himself."

Trump's actions over the years offer ample proof of that. So it's bitterly funny to see Trump fail dramatically in throwing Bill Barr under the bus.

It's Barr, instead, who has thrown Trump under the bus — completely and effectively. For some, that makes Barr look like the newest hero among Trump defectors. But Barr's no hero, only a savvier version of Trump. He's a cold-blooded politician who used Trump to get what he wanted, and then washed his hands before they were dirtied with an orange stain he couldn't wash off.

Barr's videotaped testimony to the committee shows the former AG scolding Trump on trying to use the Justice Department as his personal attorney — but that's exactly how Barr acted when Trump wanted him to crush Michael Cohen. It's just that Barr knew enough to back out when he saw the writing on the wall. He's a veteran of D.C. corruption, an alumnus of the Iran-Contra scandal, a man who has spent his professional life dodging legal stilettos aimed at his heart.

Bill Barr has been called arrogant, corrupt and incompetent. But no one has ever said he doesn't know how to survive in Washington.

Trump's supporters, of course, will tell you never to count him out.That's also what they said about John Gotti before he ended up wearing orange.

These hearings are shaping up as a solid roadmap toward wiping away this human stain and pestilence from our national psyche. It is no mistake that Lofgren brought up the "Big Ripoff." That's aimed directly at those who still support Trump. These hearings are aimed at cutting Trump off from what he values most – money. The committee intends to politically kneecap him and then deliver indictments, once he has been humiliated and exposed to his supporters for the grifter that the rest of the world knows him to be.

At that point, even his most loyal supporters will likely follow the example of Bill Barr, refusing Trump succor and happily watching him fall.

At that point, you could maybe get 75 cents for a Trump photo – unless it's used as a dart board. The sad part is, Trump and his family wouldn't even care about that, as long as they got the money.