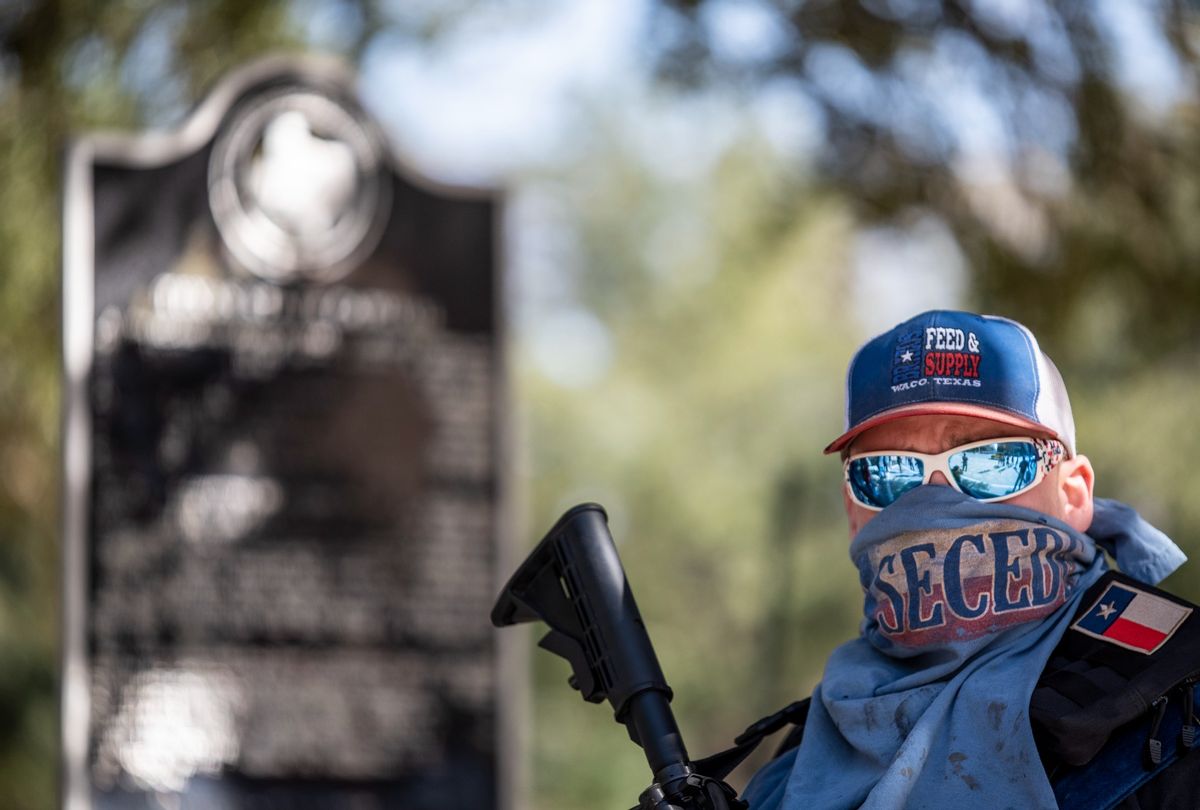 A man wears a face covering that reads "secede" outside the Texas state capitol on January 16, 2021 in Austin, Texas. (Sergio Flores/Getty Images)
--

The new Texas Republican Party platform called President Joe Biden's win illegitimate, urged a repeal of the Voting Rights Act and demanded a statewide vote on seceding from the union.

The Texas GOP at its convention this weekend adopted a far-right platform as attendees repeatedly harangued Republicans like Rep. Dan Crenshaw, R-Texas, Sen. Ted Cruz, R-Texas, and Sen. John Cornyn, R-Texas, as insufficiently loyal to the extremist GOP base. Along with a full embrace of the "Big Lie" and secessionist rhetoric, the platform called for the abolition of the Federal Reserve, federal taxation powers and gun control laws. It also described homosexuality as an "abnormal lifestyle choice" as the party outright excluded the Log Cabin Republicans, an LGBT Republican group, from its proceedings.

The platform falsely claims that the 2020 election "violated Article 1 and 2 of the US Constitution," repeating former President Donald Trump's lies about "substantial election fraud in key metropolitan areas."

"We reject the certified results of the 2020 presidential election, and we hold that acting President Joseph Robinette Biden Jr. was not legitimately elected by the people of the United States," the platform says.

But the platform goes even further, rejecting any legislation that conflicts with the state's rights and suggesting that the state could secede from the union in response to what the GOP described as federal overreach.

"Texas retains the right to secede from the United States, and the Texas Legislature should be called upon to pass a referendum consistent thereto," the document says, urging lawmakers to schedule a 2023 ballot referendum "for the people of Texas to determine whether or not the State of Texas should reassert its status as an independent nation."

Any state referendum on secession would be illegal and invalid, according to the Supreme Court. "If there was any constitutional issue resolved by the Civil War, it is that there is no right to secede," former Supreme Court Justice Antonin Scalia wrote in 2006.

The Texas GOP platform also calls for the Voting Rights Act of 1965 — which barred racial discrimination in voting — to be "repealed and not reauthorized."

The document argued that "all gun control is a violation of the Second Amendment and our God given rights." And it calls for lawmakers to "enact legislation to abolish abortion by immediately securing the right to life and equal proaction of the laws to all preborn children from the moment of fertilization."

"We can't compromise with Democrats who have a different and incompatible vision for our future," state GOP chairman Matt Rinaldi said at the convention. "We need to be a bold and unapologetic conservative party, ready to go on offense and win the fight for our country."

But attendees also appeared unwilling to compromise with members of their own party. Cornyn was booed by conventiongoers for leading negotiations on a Senate gun bill that is packed with Republican priorities and rejects new gun control measures. Cruz, who led the effort to block the certification of Biden's win in Congress, was trashed by a right-wing activist as a "coward and a globalist." Crenshaw was confronted by members of the Proud Boys and others who called him "eyepatch McCain" and a "globalist RINO."

Convention organizers were not more welcoming to certain Republicans, barring chapters of the Log Cabin Republicans from setting up booths at the event.

"It's clear that inclusion wins, which makes the Texas Republican Party leadership's decision to exclude the Texas Log Cabin Republicans from their convention not just narrow-minded, but politically shortsighted," the group said in a statement.

A party platform is not a legislative agenda and is largely symbolic. Still, it does broadly highlight the direction of the party.

"A more aggressive party platform sends a clear message to politicians about where the base is going," Brandon Rottinghaus, a political scientist at the University of Houston, told The Texas Tribune. "Donald Trump radicalized the party and accelerated the demands from the base. There simply aren't limits now on what the base might ask for."

Richard Hasen, an election law expert at the University of California, Irvine, called the party's embrace of voter fraud conspiracy theories "radical" and said the call to repeal the Voting Rights Act shows a "real deterioration in the position of the Republican Party."

"The aim of repealing the Voting Rights Act would be to make it even easier for the state of Texas to pass repressive voting laws. In one important example, repealing the VRA would eliminate the ban on literacy tests," he told The Washington Post. It's especially alarming after the Republican-dominated legislature already passed a sweeping bill imposing new voting restrictions in a state that already had strict election laws, he added. "The more you talk about the false scourge of voter fraud, the more you undermine people's confidence."