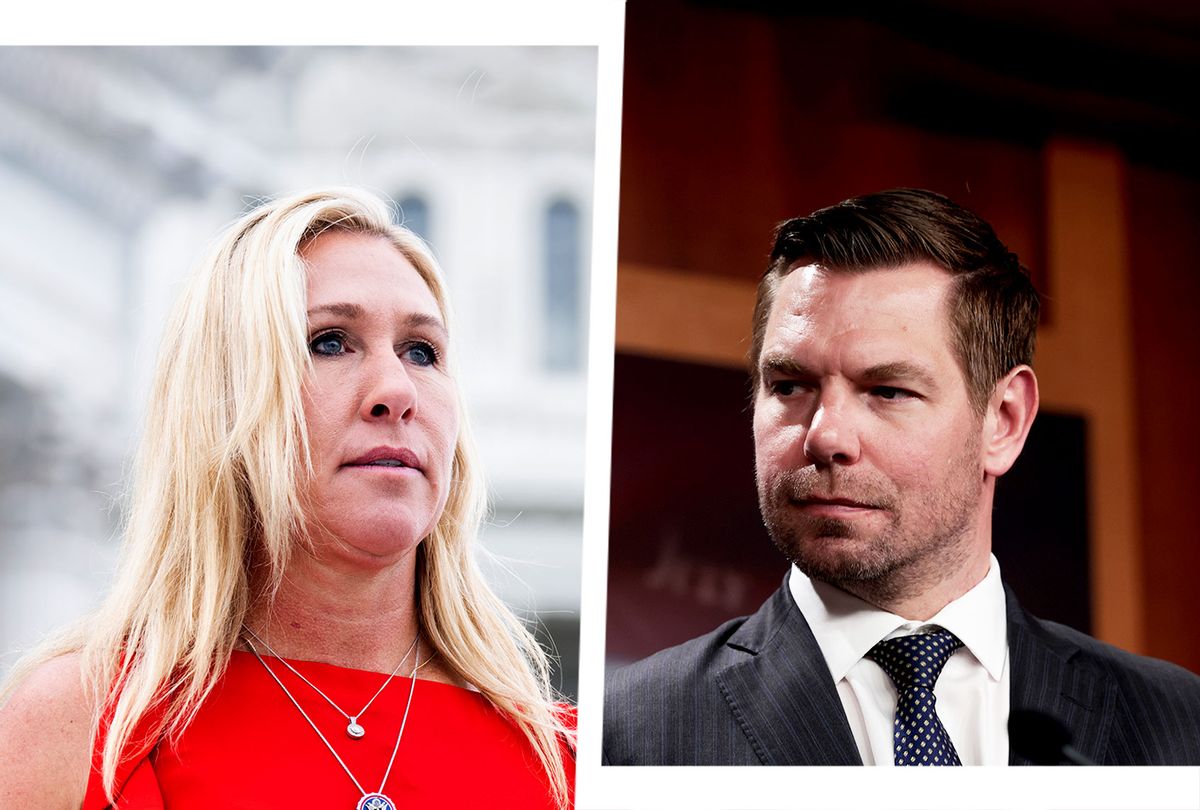 Reps. Marjorie Taylor Greene, R-Ga., and Eric Swalwell, D-Calif., got into a heated Twitter spat on Wednesday after Greene accused Swalwell of lying about a pro-Trump family he witnessed while giving a Capitol tour.

"Today I gave a tour in the Capitol and was stopped by a father with his young boy," Swalwell recounted over Twitter. "The father yelled at me 'Hey Swalwell' and then told his son, 'that's Swalwell. He's trouble. He doesn't back Trump.' I kept walking and felt sad for the boy. He's being raised in a cult family."

Hours later, Greene claimed that there was "no way that happened."

"Because we all know good Trump supporting fathers would say, 'that's the Democrat who had sex with a Chinese spy,'" she quipped.

Such allegations first emerged out of right-wing circles in December 2020 after Axios reported that Swalwell had years-long communications with a Chinese spy known as Christine Fang. Fang reportedly took part in fundraising for the California congressman's 2014 re-election campaign and helped assign an intern to his office. Swalwell reportedly cut ties with Fang in 2015 after U.S. officials notified him that Fang was part of a broader Chinese operation to influence promising politicians. That operation, according to Axios, involved sexual relations with at least two Midwestern mayors. Still, there is no evidence that Fang and Swalwell had any sexual conduct.

After Greene attempted to dredge up this unsubstantiated claim on Thursday, Swalwell shared a threatening voicemail that was sent to his office, claiming that the sender was likely motivated by violent rhetoric Greene has espoused.

"Marjorie loves to play the victim. But she's an inciter of violence," Swalwell tweeted. "Her constant attacks — even after the FBI said I was never suspected of wrongdoing — lead to threatening calls like this. This caller from today threatened to kill my three children."

In the voicemail, someone's voice can heard saying, "Hey, you little c**ksucker. You still banging the Chinese spy Fang Fang? ... We're coming to your house this weekend. Gon' get you and them little mutant bastards, them little mutant offspring of yours. We're gon' get ya."

It isn't the first time Swalwell has shared such threats. Back in December, the congressman shared a private Twitter exchange of a man telling him he should be hung and shot.