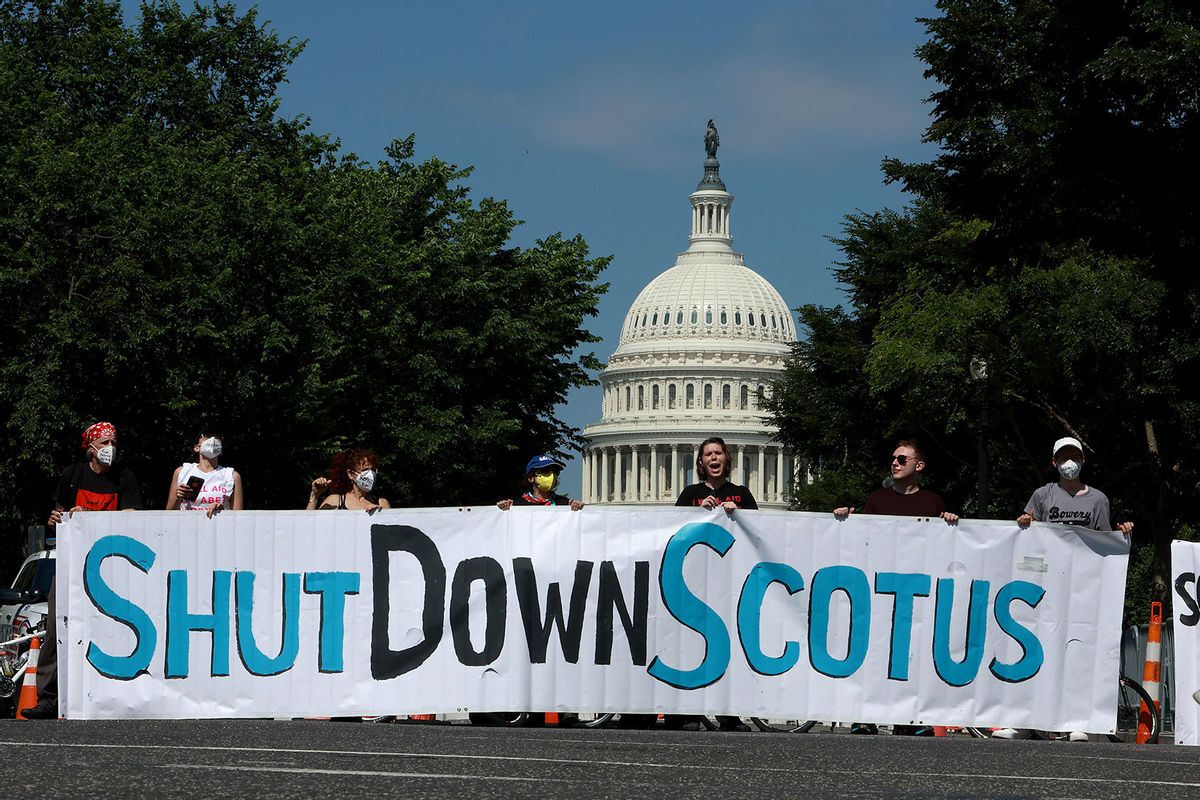 Protesters hold a banner near the U.S. Supreme Court on June 13, 2022 in Washington, DC. The court continues to release opinions as the country awaits major case decisions pertaining to abortion rights, guns, religion and climate change in the the coming weeks before the end of their term. (Joe Raedle/Getty Images)
--

Public confidence in the Supreme Court is at an all-time low as the court continues to come under fire over what critics argue has been a pattern of legislating from the bench.

According to Gallup, just 25% of Americans have "a great deal" or "quite a lot" of confidence in the judiciary, a marked 11% decrease from a year ago. The poll, conducted between June 1-20, is part of a larger trend of government institutions suffering from a credibility crisis, as Gallup noted. Still, "the 11-point drop in confidence in the Supreme Court," it noted, "is roughly double what it is for most institutions that experienced a decline."

RELATED: The Supreme Court is on defense: Justices speak out to calm growing dissatisfaction

Back in May, the court rocked the abortion advocates with news, first broken by Politico, that it was poised to overturn Roe v. Wade, the landmark 1973 ruling establishing America's constitutional right to abortion. On Tuesday, the conservative-majority court again shocked a broad swath of the American public when it ruled that the state of Maine cannot exclude religious schools from receiving public funding, dealing a decisive blow to the establishment clause, America's constitutional mandate to keep religious bias out of public policy.

More recently, the court ruled that police officers cannot be sued by suspects for failing to tell them their Miranda rights, which were put in place to protect people from self-incrimination. The judiciary also overturned a New York handgun law that required would-be gun owners to establish that they had "proper cause" to get a concealed carry license.

RELATED: Republicans got the Supreme Court they wanted: That will change America forever

Meanwhile, the Supreme Court's conservative justices have adamantly argued that their jurisprudence is not affected by their personal politics.

"Judicial philosophies are not the same as political parties," said Justice Amy Coney Barrett in a speech last September, adding that her goal was "to convince you that this court is not comprised of a bunch of partisan hacks."

But even within the court, justices worry that regardless of whether the court is political, the very perception of it being so fundamentally undermines democracy.

Last December, during oral arguments for the aforementioned abortion ruling, liberal Justice Sonia Sotomayor herself expressed doubt that the court could "survive the stench" of overruling Roe. "If people actually believe that it's all political, how will we survive?" she asked. "How will the court survive?"