Biden’s “new normal” on COVID is neither normal nor new 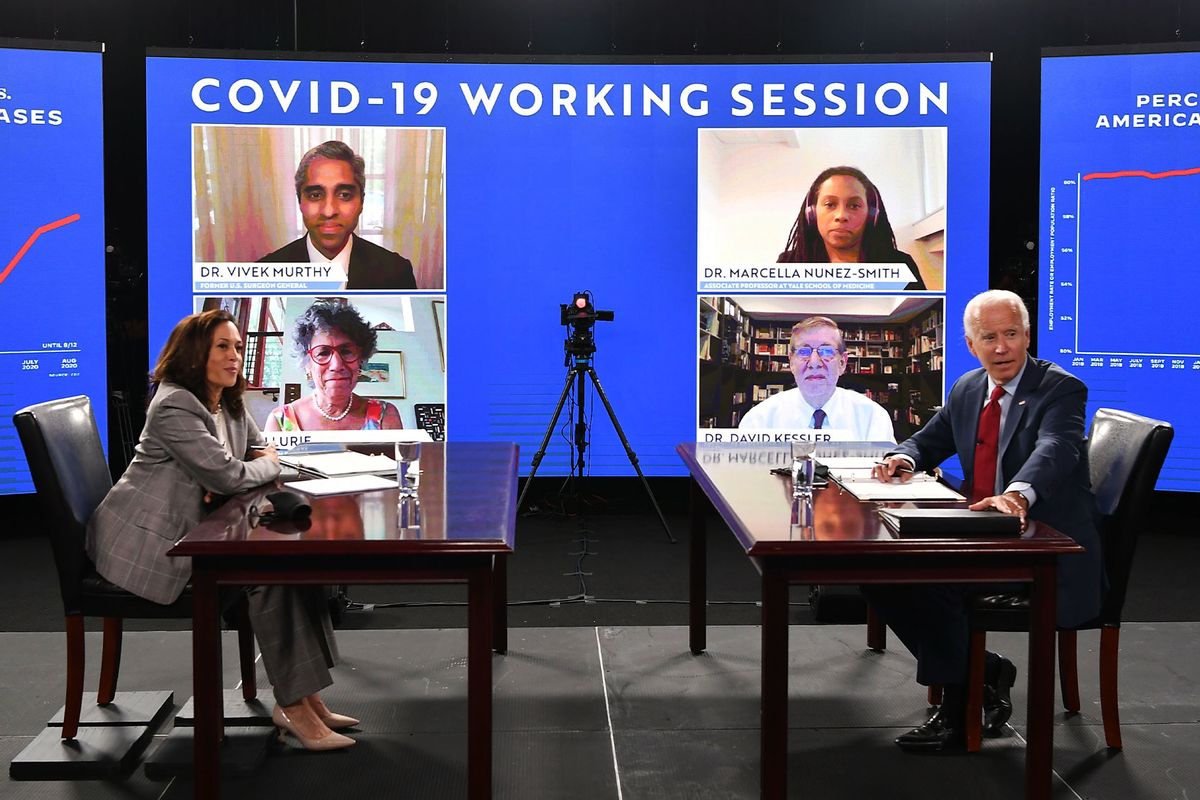 Joe Biden and Kamala Harris, receive a briefing on COVID-19 from health experts in Wilmington, Delaware, on August 13, 2020. (MANDEL NGAN/AFP via Getty Images)
--

Since winter's Omicron surge, the Biden administration has been trying to normalize the COVID-19 pandemic. In February, Biden remarked that "our country is taking everything that COVID has to throw at us, and we've come back stronger." Even more audaciously, at the State of the Union Address, he claimed "COVID need not control our lives anymore."

Yet it is seeming less and less likely that the administration will conclusively deliver on its campaign promise to "beat COVID-19." Instead, the goalposts are being shifted. As a news report revealed earlier this month, the Biden administration has deliberated internally on how to"gauge what the American public would 'tolerate'" in terms of pandemic deaths per day.  This is a disturbing deviation from responsible public health policy, which requires breaking chains of transmission, driving case numbers down, and treating deaths as preventable — not inevitable.

But amid bad news, the White House has remained relentlessly optimistic. Recently, COVID-19 Coordinator Ashish Jha claimed "We're in a way better place than where we were two years ago" — just days after the US recorded 1 million pandemic deaths. In March, the White House released the National COVID-19 Preparedness Plan, a document intended to "enable America to move forward safely (...) as we get back to our normal routines." If the country's current pandemic outcomes are indeed the "new normal" we've been promised, Americans should be looking carefully at what we are normalizing.

RELATED: Public health experts are horrified at the rift between red and blue states on COVID

In particular, a great deal of hope has been pinned on the idea that death rates will be lower in the months ahead—given that "we have the tools," as the administration and its supporters are claiming. Yet there is no guarantee that death rates are going to drop. If increasingly immune-evasive and transmissible variants continue to infect high numbers of susceptible people — and if immunity conferred by vaccination wanes across the general public — then conceivably, there is no upward limit in future American pandemic mortality.

The last time the United States saw an infectious disease as a top-three cause of death was 1937, before the availability of penicillin.

Given this, our nation's leaders and public health authorities should be working against public complacency and the false sense of security that can be conjured by terms like "normal." As a medical anthropologist and a scholar of the history of medicine and public health, we see nothing normal about the present moment.

Part of our concern stems from COVID-19's enormous epidemiological footprint. In 2020, the novel coronavirus became the third leading cause of death in the United States. Provisional 2021 data show it remains there, led only by heart disease and cancer. From a historical perspective, this is a shocking development: the last time the United States saw an infectious disease as a top-three cause of death was 1937, before the availability of penicillin.

As only readers in their eighties or nineties will remember, Americans used to die easily and frequently from bacterial and viral infections such as pneumonia, influenza, and tuberculosis. In the late 1930s and early 1940s — just shy of the "Antibiotic Era" — these high rates of mortality from infectious disease diminished drastically, mostly due to decades' worth of public health interventions, including improvements in sanitation and hygiene.

These achievements were bolstered by the ability to treat bacterial infections with an expanding arsenal of antimicrobial drugs. In just seven years — from 1943 to 1949 —  Americans saw the age-adjusted death rate from influenza and pneumonia get cut in half, dropping from 101.7 deaths per 100,000 to 45.1 per 100,000.

The outsize share of death now caused by an infectious disease could threaten a reversal of the gains we've made in public health over the last seventy-five years.

Since the "Antibiotic Era," Americans have been — in the aggregate — safer and safer from infectious disease, with noncommunicable diseases increasingly representing the country's leading causes of death. That trend reversed abruptly in 2020: the American age-adjusted death rate for COVID-19 was 85 per 100,000. In 2021, it reached 101.3. This death rate is on par with the rates of influenza and pneumonia deaths recorded in 1943 — a year marked by race riots, the internment of Japanese Americans, and the escalation of World War II.

Where many pundits have attempted to normalize COVID-19 or make it seem trivial by comparing it to other causes of death, such as cancer and the flu, this is a misleading way of thinking about death at the level of the national population. The impact of COVID-19 has caused a sea change in patterns of mortality in the United States. Indeed, the outsize share of death now caused by an infectious disease could threaten a reversal of the gains we've made in public health over the last seventy-five years. This concerning trend in mortality is not our only cause for concern: as the CDC recently reported, some 1 in 5 Americans who are infected with COVID-19 will experience long COVID symptoms.

To be sure, the way forward is not simple. But the alternative is unacceptable. Now is not the time to seek the upward threshold for accepting pandemic deaths, nor to recalibrate expectations for public health to the standards of the last century. The "new normal" that we're being asked to settle into is no best-case scenario, but a shocking anachronism—a detour into a less healthy and more dangerous past.

Read more on how COVID-19 has altered our political landscape:

Lorenzo Servitje is Associate Professor of Literature and Medicine at Lehigh University and Director of the Health, Medicine, and Society Program.