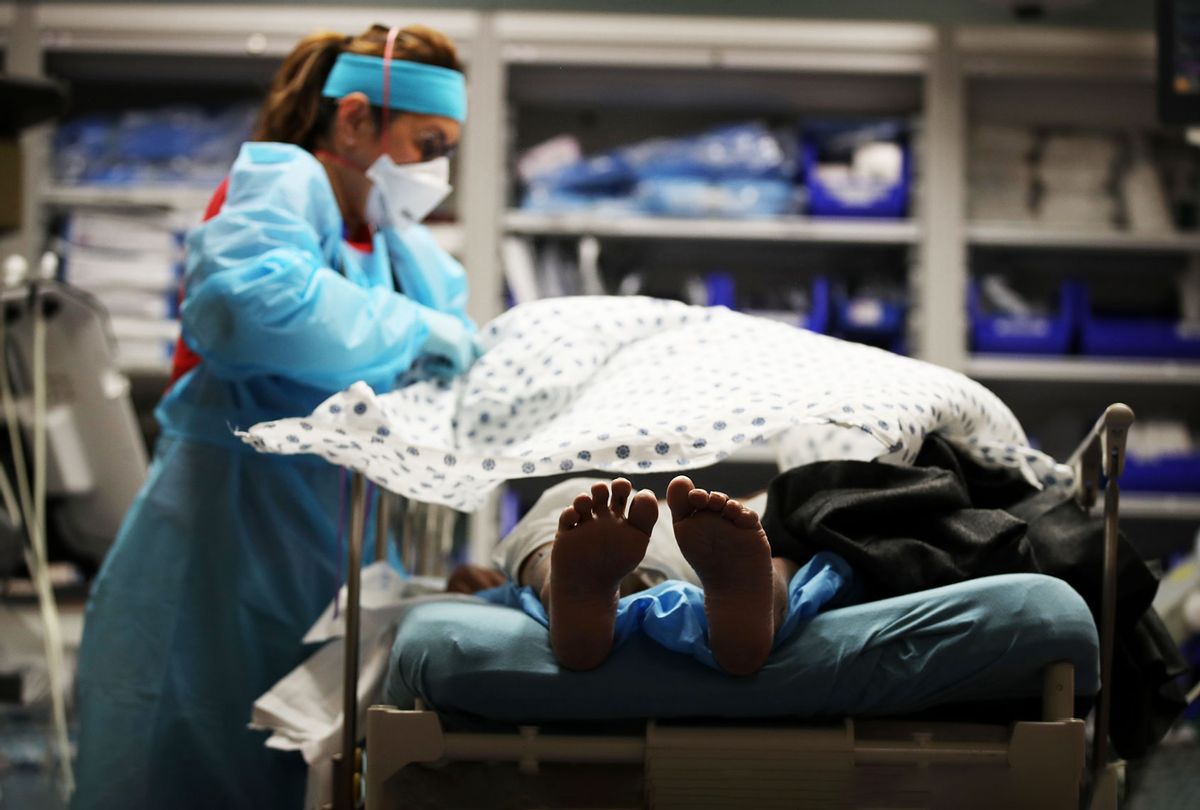 A nurse places a blanket over a patient that had just been admitted to the emergency room at Regional Medical Center on May 21, 2020 in San Jose, California. (Justin Sullivan/Getty Images)
--

Last week, a consortium of health researchers published a harrowing report that reframed the magnitude of loss during the COVID-19 pandemic: an estimated 18.2 million people have lost their lives during the pandemic, they estimate, which is three times the official global death toll of 5.9 million COVID-19 deaths.

Researchers landed on the higher number, which was published in an analysis in The Lancet, based on their calculation of the number of "excess deaths." The term excess deaths refers to deaths that were above what would be expected on average over a given time, meaning that they were either caused directly or indirectly by the pandemic. The researchers looked at the difference between the number of deaths recorded from January 1, 2020, until December 31, 2021, and the number of expected deaths based on previous trends.

This report is the first estimate of global excess deaths to be published in a peer-reviewed journal.

"Our estimates of COVID-19 excess mortality suggest the mortality impact from the COVID-19 pandemic has been more devastating than the situation documented by official statistics," the authors wrote. "Official statistics on reported COVID-19 deaths provide only a partial picture of the true burden of mortality."

According to the report, the gap between excess mortality and COVID-19 deaths was much larger in south Asia and sub-Saharan Africa than in other regions. The researchers are calling on the scientific community to "highlight the importance of the use of COVID-19-related excess mortality estimates in policy and in monitoring and evaluation efforts."

In an interview with Salon, Haidong Wang, an associate professor of health metrics sciences at the University of Washington and co-author of the report, argued that reporting COVID-19 deaths — as in deaths by the virus — aren't an accurate metric to measure the true impact of the human mortality during the pandemic. Wang also noted that even the 5.9 million "official" number is likely lower than the real total deaths by COVID-19, since many countries lacked accurate reporting.

Indeed, Wang said, more research is needed to separate deaths caused directly by COVID-19 from those that were indirectly caused by COVID-19.

Dr. Monica Gandhi, infectious disease doctor and professor of medicine at the University of California, San Francisco — who was not involved in the study — described the results as part of a "reckoning" that's been happening nearly two years since the pandemic started.

"The majority of the world is likely underestimated," Gandhi said, adding that in Alameda County in the California Bay Area, deaths by COVID-19 were overestimated, which could indicate that in more developed countries counts could be overestimated. Gandhi agreed that it is important to look at excess deaths, especially since a lack of healthcare during pandemic peaks likely caused people to unnecessarily die, but noted that it is important to separate these deaths from deaths caused by COVID-19 directly.

"I think they should be divided into COVID deaths and then COVID-pandemic response deaths, that are related to COVID — but the problem is that if we historically look back and say 18 million, that will look like the infection-fatality ratio of the actual infection was higher than it was," Gandhi said. The infection-fatality ratio means a rate describing the number of infections proportional to the number of deaths. Gandhi said COVID-19's death to fatality ratio was "high enough," but was not nearly as high as the influenza of 1918, which the Centers for Disease Control and Prevention estimates killed one in ten of those it infected.

"The IFR [infection fatality rate] was so much higher, especially if you think about the world's population at the time," Gandhi said of the 1918 pandemic.

But aside from lack of healthcare access and COVID-19, what exactly were people dying from that could factor into overall excess mortality rates?

Wang said that is a question for future researchers to answer. However, Wang told Salon he hopes this report encourages public health experts to factor in excess deaths to "more accurately assess the impact of the pandemic."

The CDC reports that there have been more than 1 million excess deaths in the U.S. due to the pandemic; 964,000 Americans died from confirmed Covid, but deaths from hypertension, heart disease and Alzheimer's disease were above the expected number. The number of drug overdoses has also significantly increased during the pandemic.

"I think it's important that we have a better registration system that can provide us with more data in a more timely fashion," Wang said. "And that's a really important lesson to learn from this."