An omicron sub-variant is spreading rapidly in the UK. The US may be next

“I think late April is when things will start to get really worrisome,” one epidemiologist said 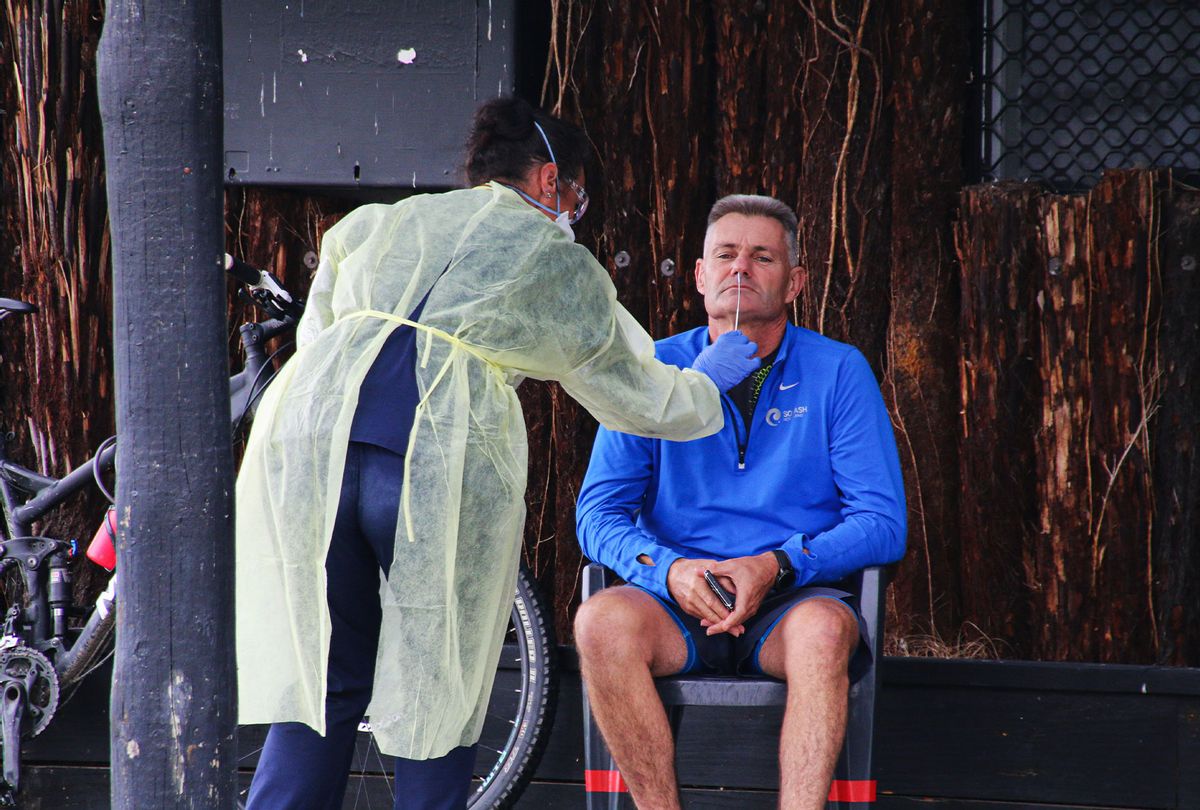 A man arrives at a drive-thru testing station on his bike. Covid-19 cases are drastically rising across New Zealand. The BA2 variant of Omicron has been detected around with Delta during a genomically sequenced test. (Adam Bradley/SOPA Images/LightRocket via Getty Images)
--

In much of the United States, it's beginning to feel like the pandemic is almost over. COVID-19 restrictions have eased and mask mandates have been lifted as daily cases, hospitalizations and deaths continue to decline in a majority of cities across the country.

Yet some epidemiologists fear that the returning sense of normalcy may merely be a mirage, when in reality the country is on the brink of yet another wave of a newly-mutant variant. Currently, in parts of Europe — where COVID-19 restrictions eased a couple months before they did in the U.S. — infection rates are starting to climb. And as it did previously, Europe's experience may herald what is to come in the United States.

According to the Johns Hopkins Coronavirus Resource Center, the past week has brought an increase in COVID-19 cases to nearly half of all European countries. Countries seeing the biggest surges include Finland, Switzerland, and the United Kingdom. Specifically, in the UK, where COVID-19 cases and hospital admissions are rising, scientists are also seeing an uptick in cases caused by the BA.2 omicron subvariant. Previously, the pandemic in the United Kingdom has foreshadowed what came later elsewhere, including the United States, and some experts fear the UK's recent surge is yet another signal that the U.S. isn't too far behind such a trend.

RELATED: Pediatricians on Florida's recommendation against vaccinating children: "Don't listen to it"

BA.2 is a subvariant of the original omicron variant that caused the most recent surge in hospitalizations and cases across the world. However, unlike the "original" strain of omicron ( known as  BA.1), early research shows that BA.2 is more transmissible and can reinfect people who were previously infected with BA.1— although the same research also suggests that reinfection is rare. While BA.2 was discovered in November and has already become the most dominant variant in countries like Denmark and South Africa, there is no guarantee that it won't gain traction in the U.S. yet.

Eric Feigl-Ding, chief of COVID-19 risk task force at the New England Complex Systems Institute, told Salon that "signals" are there that suggest that BA.2 will cause the pandemic to get worse again in the next couple of months.

"I think late April is when things will start to get really worrisome," Feigl-Ding said. "And then I think May is when I think it will get much worse; I always tell people we have about one month before it gets bad, but you can see the turnaround signals."

Feigl-Ding has a track record of getting predictions right. In January 2020, before the pandemic started in the United States, Feigl-Ding warned how deadly a global COVID-19 pandemic could become — but was brushed off as a COVID-19 "alarmist." Months later, Feigl-Ding was redeemed in the public eye.

One signal indicating that the U.S. could see a BA.2-driven surge this spring, Feigl-Ding said, is from the data of wastewater. As Bloomberg reported, a wastewater network that monitors for COVID-19 trends shows that cases are once again rising in many parts of the country.

"While wastewater levels are generally very low across the board, we are seeing an uptick of sites reporting an increase," Amy Kirby, the head of the CDC's wastewater monitoring program, told Bloomberg in an email. "These bumps may simply reflect minor increases from very low levels to still low levels. Some communities though may be starting to see an increase in COVID-19 infections, as prevention strategies in many states have changed in recent weeks."

Feigl-Ding told Salon it is notable that BA.1 is dropping in prevalence in the U.S., while BA.2 is increasing. According to the Centers for Disease Control and Prevention (CDC), BA.2  makes up 11.6 percent of the coronavirus variants circulating in the United States as of March 5. The previous week, BA.2 made up 8.3 percent of the coronavirus variants circulating. In South Africa, where news first broke about the original omicron strain, BA.2 overtook the original omicron in South Africa and it's become the dominant strain in Denmark. Feigl-Ding said that the low booster rate in the U.S. could make the U.S. more vulnerable to a BA.2 wave, too. To date, only 44 percent of fully vaccinated people in the U.S. have received a booster dose, according to CDC data.

On Monday, Bob Wachter, the chair of University of California, San Francisco's department of medicine, had a slightly more optimistic prediction in one of his viral COVID-19 updates.

"While the BA.2 subvariant (still a minor player in U.S.) is a bit more infectious, it's not more serious or more immune evasive than the original," Wachter said on Twitter. "This means that while BA.2 may increase case numbers a bit, it shouldn't cause a surge by itself."

However, Wachter said he does see "some dark-ish clouds on the horizon."

"First, much of our relative quiet owes to our wall of immunity from vax, infections, or both. All these protections are waning," Wachter said. "The durability of immunity afforded by an omicron infection is still unknown, but early evidence says that people whose only immunity came from their omicron infection may well be vulnerable to reinfection in a few months."

But Wachter pointed to a Nature study suggesting that vaccine immunity is waning.

"Despite conflicting data from Israel, I'll bet that Pfizer's CEO is right and a 2nd booster will soon be recommended," Wachter said.

Dr. Monica Gandhi, infectious disease doctor and professor of medicine at the University of California, San Francisco, told Salon she can see a scenario in which BA.2 causes an increase in cases again in the United States. However, she said such a scenario largely depends on vaccination rates in a given community.

"I do think it will increase cases, because anything more transmissible increases cases, but I think that increasing hospitalizations will purely depend on the rate of vaccination in that community," Gandhi said. She pointed to the current situation in San Francisco: "We have BA.2 in San Francisco and three people in the hospital."

Gandhi says since we just went through the BA.1 variant, she hopes natural immunity in unvaccinated populations will help keep healthcare systems from being overwhelmed in the event that BA.2 does explode in parts of the United States.

Feigl-Ding told Salon he wishes politicians waited just another month to lift mask mandates. He believes that a little more time with restrictions could mean that BA.2 fizzles out, like the mu variant did.

"We would keep cases so low that if there were any outbreaks, we would be at the high probability of fizzling out again," Feigl-Ding said. "This is the problem — we always give up when we're at a plateau, we've always kind of given up halfway through the drop."