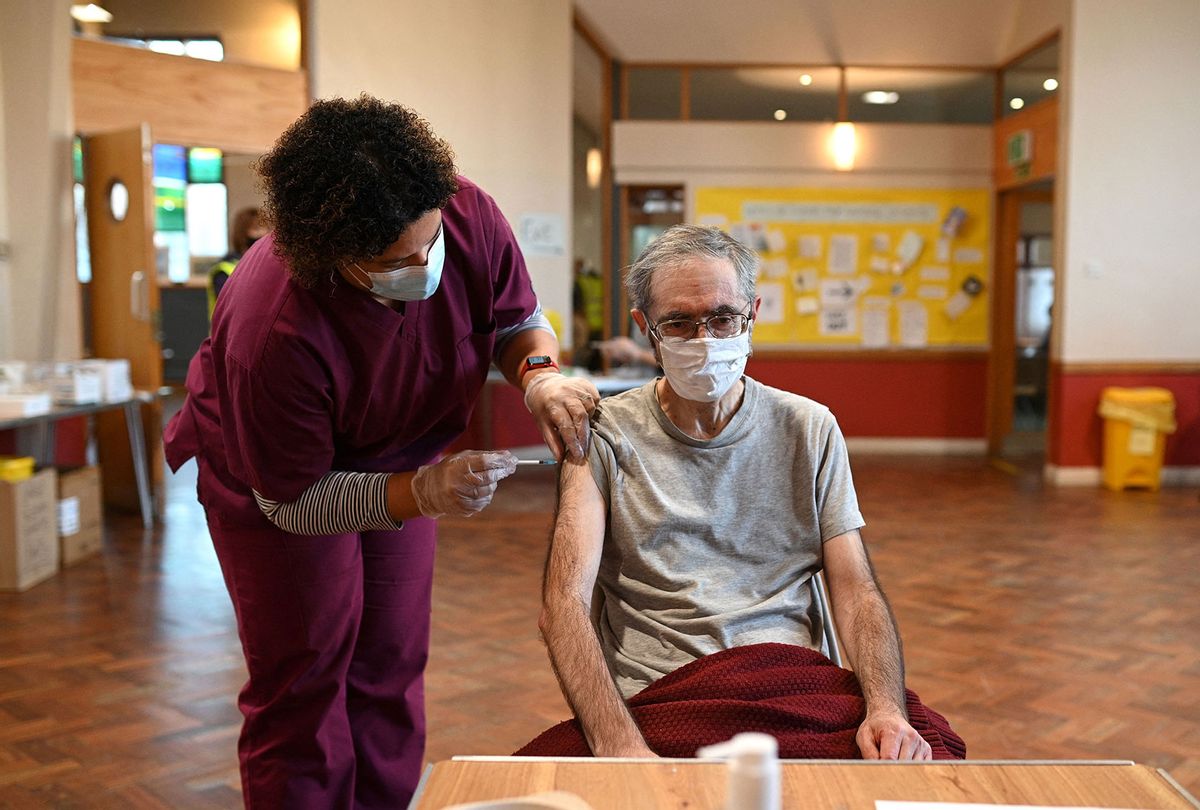 A man receives a dose of the Pfizer Covid-19 vaccine in a vaccination clinic set up at St Columba's Church in Sheffield on December 15, 2021 as the UK steps up the country's booster drive to fight a "tidal wave" of Omicron. - The country's medical advisers have raised the Covid Alert Level due to a "rapid increase" in infection from the variant. (OLI SCARFF/AFP via Getty Images)
--

Earlier this month, U.S. public health officials took a strong stance on COVID-19 booster shots — telling the public that, if they are eligible, to get one to protect against the highly infectious omicron variant. As of December 28, 2021, more than 66.4 million Americans have received a booster shot.

Yet while a booster campaign continues to be underway in America, scientists in Israel are studying the possibility that a so-called "fourth" shot — meaning, an additional shot after a two-dose vaccine and a single-dose booster — might be the key to raising immunity against COVID-19.

Such a development would not be unprecedented in the world of vaccines. SARS-CoV-2, the virus which causes COVID-19, appears to be in a class of virus akin to influenza for which the body's immune system cannot permanently maintain immunity. This is known as transient immunity, as opposed to durable immunity, which is afforded by infection of or vaccinations for viruses such as measles or chicken pox. Flu, on the other hand, requires an annual shot, because the body's immune system forgets periodically how to protect against the influenza virus, and also because the influenza virus mutates year-to-year.

Indeed, the fourth shot proposal — or second booster, if you prefer — for COVID-19 is somewhat analogous to the need for an annual shot to immunize against the flu, and may be needed for similar immunological reasons.

Hence, earlier this month, the Centers for Disease Control and Prevention (CDC) officially changed its guidance for people who received two doses of the mRNA COVID-19 vaccines. Everyone over the age of 16 who received their second dose over six months ago is now eligible to receive a third shot. Some workplaces and college campuses are now mandating that to be considered fully vaccinated, one must be boosted. Restaurants in San Francisco are requiring a booster for entry.

But while the U.S. population is still getting accustomed to the idea of a third-shot booster, researchers in Israel are considering whether a fourth may be necessary to keep COVID-19 at bay.

On Monday, Israeli scientists kicked off a small study to test the safety and effectiveness of a fourth dose in 150 medical professionals who had already received a third dose of the Pfizer-BioNTech vaccine at least four months ago. The study comes after a panel of medical experts advised the Israeli government to offer a fourth shot to people over 60, to those who are immunocompromised, and to medical workers. While the Isareali Ministry of Health has yet to approve and implement the recommendation, the study is a step toward an official recommendation. Since Israel was a global leader in studying the third shot, all eyes are on Israel now to see whether or not this is a preview for our future. Some additional countries, Germany and the United Kingdom, are considering a second booster, too.

"I think there will be people probably who will receive a fourth jab," said Adam Finn, who is a member of Britain's Joint Committee on Vaccination and Immunisation in the UK, according to The Guardian. "Whether that will be everyone, I think, is still very much in doubt... we do need to see how things go through this wave and beyond."

So, is a fourth jab in the future for the U.S., too? Some experts aren't convinced that it is necessary just yet.

"You have to then ask yourself, 'What is the goal?'" L.J Tan, chief strategy officer for the Immunization Action Coalition, told Salon. If the goal is to "reduce hospitalizations, reduce the surge on the systems, and reduce the number of people getting severely ill," Tan advised that objective should be to get booster shots to everyone first before offering a fourth dose.

"But if the goal is to stop transmission and stop people from passing omicron from one person to another, then perhaps a fourth dose is necessary," he added. Tan was unsure that there was data yet that said that a fourth dose would be useful, but said he was glad to see a clinical trial in progress and eager to see what it would reveal.

In the Israel trial, people who are participating must have antibody counts below 700. One medical professional who received the fourth shot said he wants to protect his heart transplant patients, according to the Washington Post.

"The idea is before the government decides whether to go ahead with another vaccination campaign, to check the efficacy of this vaccine," said Steve Walz, a spokesperson for the Sheba Hospital where the study is being conducted.

Moreover, data from Britain suggests that protection against symptomatic Covid caused by the omicron variant, provided by boosters, might wane within 10 weeks.

Tan told Salon there is still a lot of data lacking around omicron and virulence (meaning how severe it is) to make the case that three shots aren't effective enough — depending, like Tan previously said, on the goal of vaccinations.

Tan added, "when you couple that with the suspicion that omicron is more infectious but less virulent or less severe, you have to then ask yourself, 'What is the goal?'"

As scientists learn more about omicron, time will tell if a fourth dose is necessary. Initial data from the study in Israel are expected to be available in the coming days and weeks.

What we know about omicron