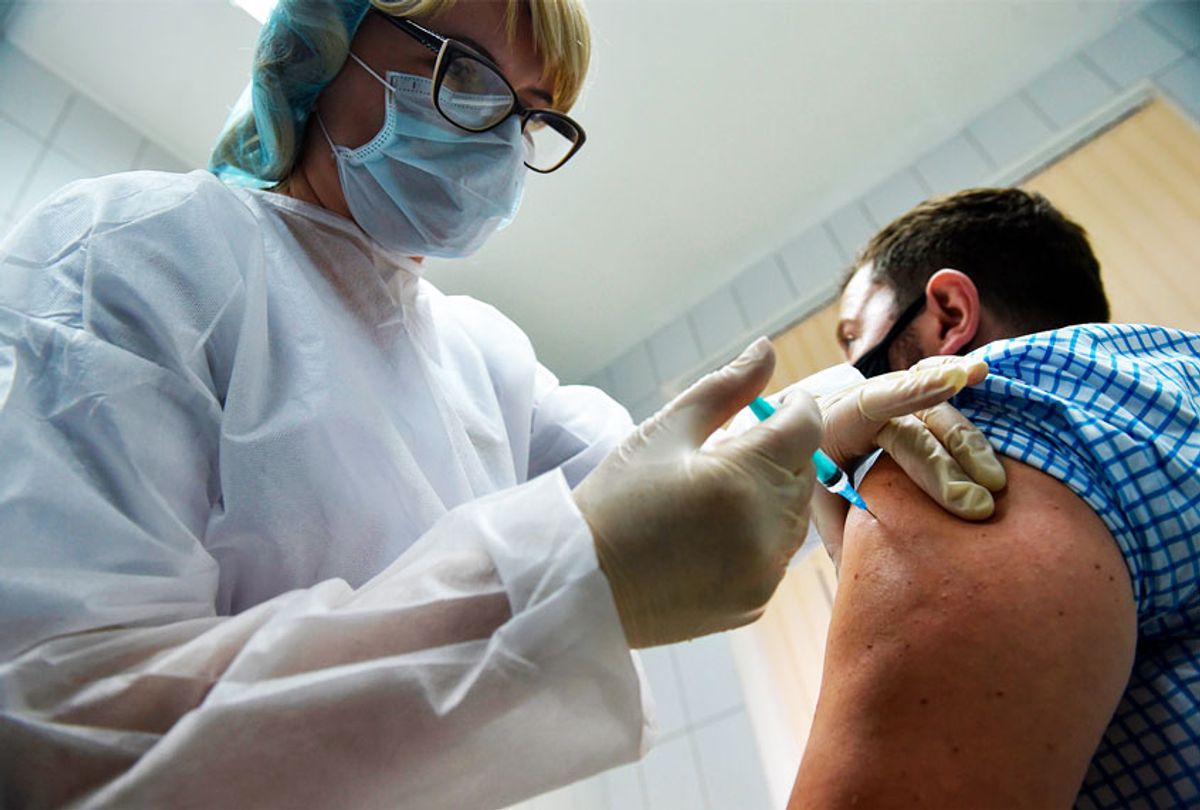 A nurse inoculates volunteer Ilya Dubrovin, 36, with Russia's new coronavirus vaccine in a post-registration trials at a clinic in Moscow on September 10, 2020. (Getty Images)
--

The popular conception of a "vaccine" is that it is an inoculation that makes you immune to a pathogen — if not for life, at least for a very long time. On that principal, much of the world's hope for a return to a pre-pandemic normalcy has rested on a vaccine for the novel coronavirus, the cause of COVID-19.

Yet that common conception of how vaccines work, it turns out, isn't entirely accurate. The reason relates to two concepts — "transient immunity" and "durable immunity." Understanding these are the key to understanding how the pandemic will finally end.

First, a brief primer on the most common misconception about immunity: the idea that once you've contracted a virus, or once you've been vaccinated against it, you can no longer get said virus. Neither of those are necessarily true: there are viruses which people can contract multiple times, because the body's immune system essentially "forgets" how to create immunity to it after a period of time. Likewise, there are vaccines which only confer short-term immunity, and for which we have to get re-vaccinated for periodically.

Currently, we don't know for certain which category the novel coronavirus falls into — although mounting evidence suggests that immunity against it won't last. Indeed, there are multiple cases of patients who have contracted the virus multiple times within a few months. While they could be outliers with poor immune systems, the more cases of re-infection that emerge suggest not.

But there's one more catch: Vaccines can actually confer different types of immunity than infections can — say, long-term as opposed to short-term.

From a global public health standpoint, you can see how returning to any sense of normalcy depends on our understanding of coronavirus immunity. In other words, does coronavirus immunity last a lifetime, a year, or as short as a few months? Do those who have been infected already need a vaccine, or are they already immune?

It doesn't help that the science is constantly shifting on this, and month-to-month, scientific studies have slightly different conclusions. As Salon has previously reported, the data and research currently suggests that immunity isn't lifelong like the measles. However, it's hard to know how long immunity lasts because it's such a new virus, but here is everything that scientists currently know.

There are myriad ways the human body can fight off a viral infection. Dr. Charles Chiu, a professor of infectious diseases at the University of California–San Francisco, pointed Salon to three specific ones: passive immunity, neutralizing antibody immunity, and active immunity.

"The idea is that with any viral infection, including an infection from the novel SARS-CoV-2, is that patients who have intact or healthy immune systems will mount an immune response,"  Dr. Charles Chiu, a professor of infectious diseases at the University of California–San Francisco, told Salon. This, he said, is known as "passive immunity."

"That's really antibody-centered," Chiu said. "The idea is that the B cells, which are white blood cells in your blood, will react to the virus, and will produce antibodies."

"The idea is that if you're immune, if there's a next time and you are reinfected, then those antibodies are already circulating and present in your blood and they will neutralize the virus immediately," Chiu explained. "So you will, you'll be less likely or you will not be reinfected."

However, not all antibodies are neutralizing. Chiu pointed to HIV (human immunodeficiency virus) as an example of a virus that creates antibodies that aren't neutralizing.

"You will make antibodies in response to a viral infection, but you may not necessarily make neutralizing antibodies that will prevent you from getting reinfected," Chiu noted.

"T cells will actively react to [the virus], they're memory T cells that sort of remember when you've been infected before," Chiu said. "If you get exposed again, those T cells will then kick in and help to prevent you from getting reinfected."

Immunologists are trying to figure out whether novel coronavirus infection confers durable immunity or transient immunity.  These terms refer to the strength and period of the type of immunity. For example, if the antibodies made due to a viral infection are durable, that means immunity is long-lasting. If they're transient, that means they only last a short while.

As mentioned above, mounting evidence suggests that immunity to the novel coronavirus is transient. But just how transient? We don't know, but there is more evidence every week. In September, researchers published a study in the scientific journal Nature Medicine suggesting that people who contract the novel coronavirus and then become immune may stay that way for up to twelve months, based on studying four different seasonal coronaviruses.

However, as Chiu noted there are a couple of differences between the novel coronavirus (SARS-CoV-2) and the seasonal ones. One is that they've been around longer, meaning they're more diverse because they've had more time to mutate.

"It hasn't had the time to mutate widely and to become very divergent," Chiu said. "And what that means is that it's possible that vaccines that are directed specifically against SARS-CoV-2 are more likely to be durable; they're more likely to last longer and be effective longer, perhaps because there's less divergence within this particular strain versus the other seasonal coronaviruses."

What does this mean for COVID-19?

There have been several studies on antibodies and SARS-CoV-2. In one study, researchers tracked COVID-19 patients over time and found that the amount of their antibodies peaked following the onset of symptoms and then began to decline. For some study participants, the antibodies were almost all undetectable within three months. A more recent study of patients in Britain showed a similar trend. But as Nature explained in an article, it could just take minute numbers of antibodies to prevent a reinfection and fight off the coronavirus again.

Most importantly, however, vaccines can confer different types of immunity than actually contracting the virus. Indeed, immunologists note that a vaccine could have durable immunity even if the natural response is transient.

"The vaccine doesn't have to mimic or mirror the natural infection," Shane Crotty, a virologist at the La Jolla Institute for Immunology, told the New York Times.

Immunologists have been pointing to the human papillomavirus (HPV) as an example of a virus that has a poor immune response and weak antibodies, but a durable vaccine immune response that lasts for at least a decade.

Considering that the coronavirus likely has transient immunity, this would make it harder for countries and cities to achieve herd immunity through letting the virus spread.

"It really depends on how transient it is, and how rapidly we can really ramp up to be able to vaccinate a sufficient proportion of the population to develop herd immunity," Chiu said, adding that vaccine hesitancy is another barrier if the coronavirus vaccine requires multiple doses to be effective. "We already have issues right now with adherence to the flu vaccine, and there's no reason to think that it's going to be different."

That means that humanity's best bet for achieving durable immunity is still through a vaccine. Relying on a strategy of waiting for herd immunity to be achieved is "flawed," according to a paper by a group of researchers published in The Lancet.

"There is no evidence for lasting protective immunity to SARS-CoV-2 following natural infection, and the endemic transmission that would be the consequence of waning immunity would present a risk to vulnerable populations for the indefinite future," the researchers wrote. "Such a strategy would not end the COVID-19 pandemic but result in recurrent epidemics, as was the case with numerous infectious diseases before the advent of vaccination."

In other words, political leaders who have pinned hopes of defeating the virus on achieving herd immunity will not only fail, but will needlessly kill their citizens in the process. President Donald Trump as well as UK Prime Minister Boris Johnson have both touted a strategy of achieving herd immunity through deliberate public health inaction in order to let the virus run its course through citizens.