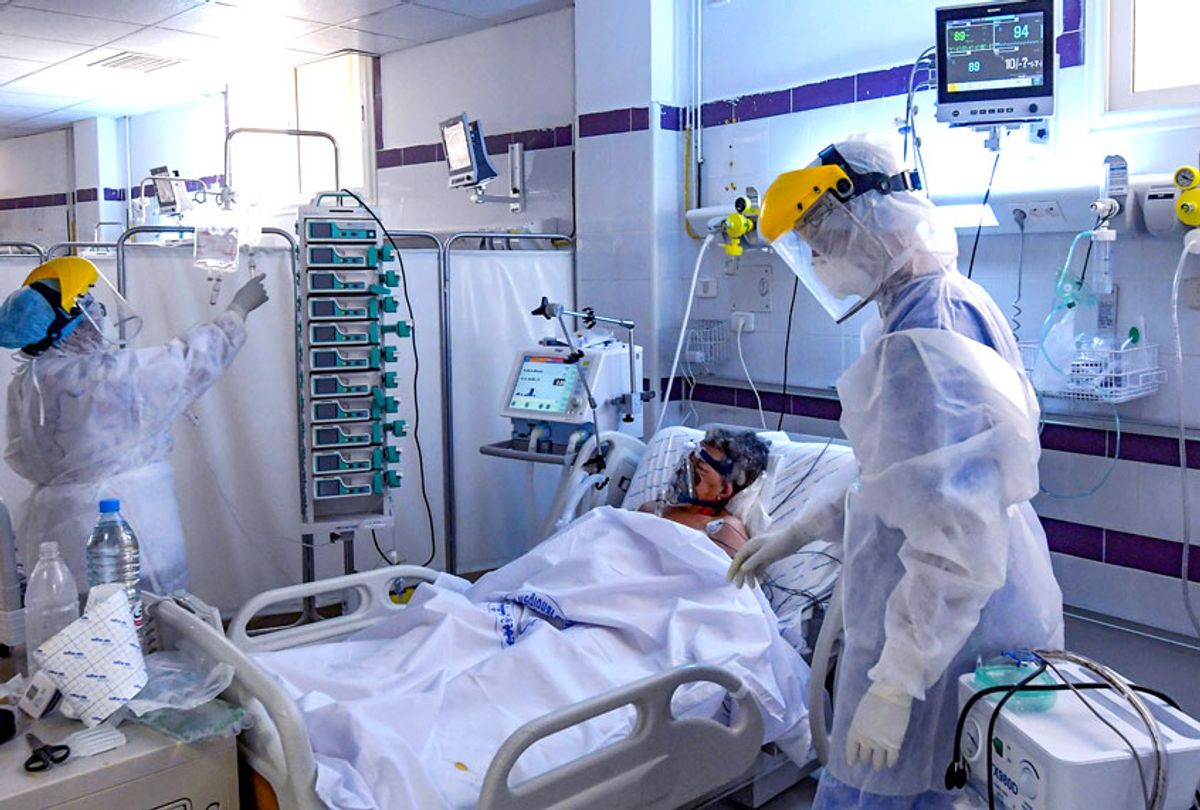 A patient infected by the covid-19 caused by the novel coronavirus receives treatment at the intensive care unit of a hospital in the southwestern Tunisian town of Gabes on August 26, 2020, as cases of infection surge there. (FETHI BELAID/AFP via Getty Images)
--

There are now three known cases around the world of patients who had been previously afflicted by COVID-19 who contracted the virus a second time, months after clearing the first infection. While the idea that coronavirus could infect the body multiple times is alarming, scientists caution that there is not yet any cause for alarm and that such cases are rare.

The first verified case was reported on Monday from Hong Kong, where researchers say that a 33-year-old man who had first been infected with SARS-CoV-2 in late March seems to have been reinfected with the virus earlier this month while traveling through Europe. The Hong Kong scientists claim that they have determined through genetic sequencing that the second infection was a different strain than the first, although they have not yet released the full study to provide researchers with a complete picture of the patient's medical status.

One day later, Dutch media outlets reported that two individuals — one in the Netherlands, the other in Belgium — had also been seemingly reinfected with the coronavirus. Because the Dutch patient was elderly and had a weakened immune system, it is possible that their age played a role in why the apparent reinfection happened.

Experts who spoke with Salon agree that these developments merely underscore our lack of understanding of the novel coronavirus. Dr. Russell Medford, chairman of the Center for Global Health Innovation and Global Health Crisis Coordination Center, told Salon that the news about the three reinfected (or potentially reinfected) patients does not necessarily indicate that the novel coronavirus is somehow anomalous when compared to other viruses.

"Our understanding of the interaction of the SARS-CoV-2 virus with the human immune system is at a very early stage," Medford explained by email. "From the genetic data reported for the Hong Kong patient, we can now say that the SARS-CoV-2 virus can re-infect an individual who has recovered from a prior infection. In and of itself, this is not a surprising nor alarming finding as re-infection in humans does occur with other viruses such as the non-SARS coronaviruses, influenza and human papilloma virus."

He added, "What we must learn from additional studies include whether this is a very rare or common occurrence in people infected with SARS-CoV-2." Medford said the next step for researchers was to ascertain whether the first infection "confers some protection" against a more severe re-infection, and how these findings relate to our understanding of the immune response. Such knowledge could affect vaccine research, Medford explained.

Dr. Georges Benjamin, executive director of the American Public Health Association (APHA) and former secretary of health in Maryland, told Salon by email that one of the most important takeaways from these potential reinfections is that they reveal just how little we know about the novel coronavirus.

"[This] tells us that the immune relationship between humans and this virus is still poorly understood," Benjamin explained. "What we do know is the human immune response to infection has a wide spectrum which includes resistance to infection (kids who get infected but not sick); people that get sick and recover; people that get sick then recover and then get very, very sick; the recurrence of disease as represented in this single case; and evidence that vaccination will yield partial or full protection."

He added that there is still a very high chance of developing a vaccine based on what we know today, but "the big question is around how many initial doses we will need and how often we will need to be vaccinated. I am, of course, assuming a safe and effective vaccine emerges."