mRNA vaccines changed the course of the pandemic. Now, they could cure all kinds of other diseases

From HIV to cancer to influenza, researchers say that mRNA vaccines have tremendous medical potential 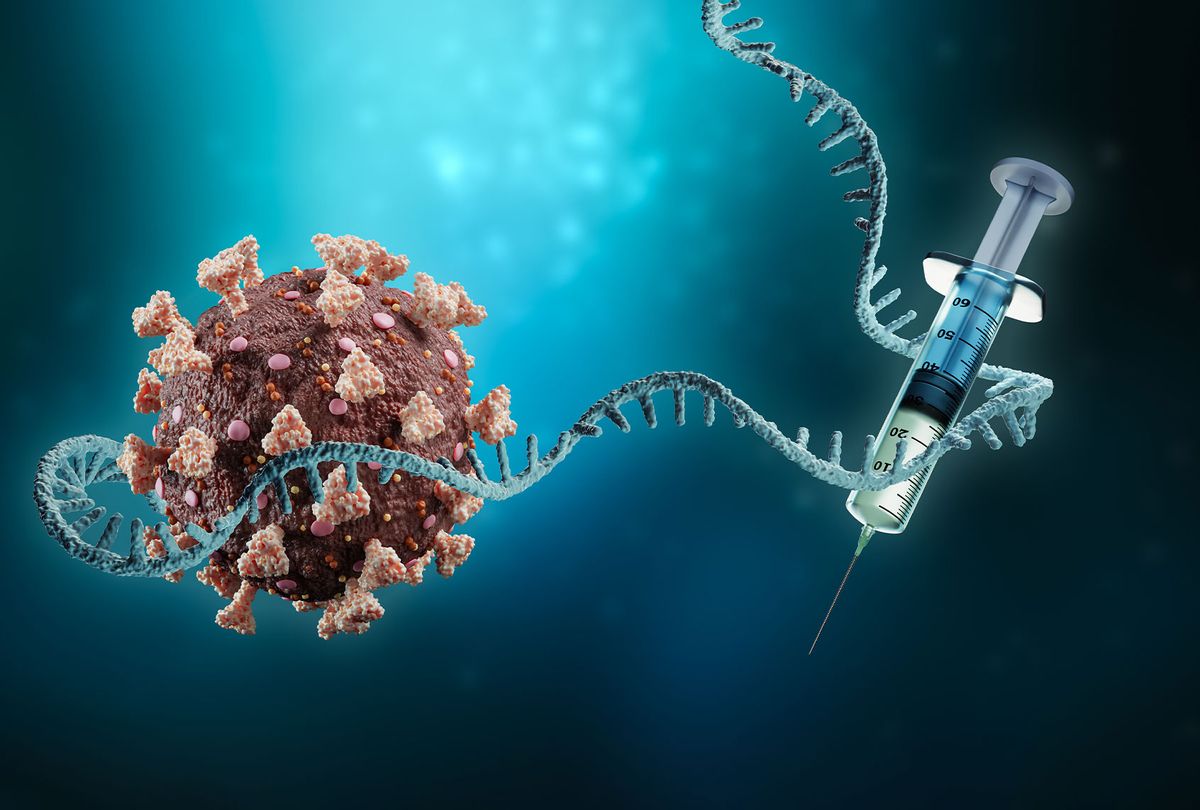 The COVID-19 pandemic is what historians refer to as an "inflection point," or a single event that has a dramatic and sweeping effect on the human story. In the case of this particular event, it changed the way we work, raised awareness about public health policy, contributed to the toppling of a president — and, in the field of medicine, resulted in a leap forward for vaccine technology. Indeed, one of the great unsung achievements amid the pandemic was how scientists from around the world worked together to create multiple effective vaccines in less than a year.

Yet what may prove most historic is the biotechnology that emerged from the pandemic. Specifically, the vision of an mRNA vaccine went from dream to reality. And the successful creation of a viable mRNA vaccine could have repercussions for the way diseases are treated for centuries.

That technology, whose development was quickened by the pandemic, is already being studied to treat other diseases. Earlier this month, scientists at Yale University created a prototype mRNA vaccine that protected guinea pigs from tick-borne diseases by training their immune systems to recognize and fight proteins found in tick saliva. They hope that, with some further development, this could be used to help humans avoid developing Lyme disease if a tick bites them.

Yet this is merely one example of mRNA vaccines' potential, revealing how they have far more utility than merely fighting COVID-19. Indeed, mRNA vaccines are something of a holy grail of medical innovation — and researchers believe that mRNA vaccines and their underlying biotechnology could be used to fight diseases like HIV, cancer, and influenza.

The promise of mRNA vaccines

As their name suggests, mRNA vaccines depend on the nucleic acid known as RNA. RNA is a molecule similar to DNA, but it is single-stranded (DNA is double-stranded) and plays a large number of roles in keeping your cells alive and healthy. But don't think they are unique to humans: They are found in all living things. There are also certain types of viruses — like SARS-CoV-2, which causes COVID-19 — that could be characterized as little more than RNA strands surrounded by protein shells. Like all viruses, they take over cells and force them to churn out other copies of themselves, the worst kind of mooch you can imagine.

Yet RNA and mRNA are not precisely the same thing. mRNA refers to "messenger RNA," a specific type of RNA that (as indicated by its name) transmits information from genetic codes in the nucleus to the cytoplasm where proteins are manufactured.

This hints at how mRNA vaccines work, which is essentially by giving your cells a blueprint of a part of a virus, and then having them manufacture what they need on their own. Previously, vaccines contained either a dead or weakened version of a pathogen, which the immune system would then learn to recognize. But mRNA vaccines don't actually contain any of a live or dead virus; instead, they contain a set of instructions (in mRNA) that infects some of the host's cells and makes them spit out a piece of protein associated with a pathogen. One's cells never manufacture the actual virus; only a piece of its "shell," say. Those pieces are then detected by the immune system and identified and destroyed. It would be a bit like learning the presence of a criminal by identifying the look of their clothing, rather than the criminal themselves.

In the case of the mRNA vaccines manufactured by Pfizer and Moderna, the mRNA contains instructions for one's cells on how to create the spike protein. The spike proteins are the little points that emerge out of the coronavirus, like spines jutting from a sea urchin, and they are what the SARS-CoV-2 virus uses to enter your cells and get you sick with COVID-19. The mRNA vaccines have been extraordinarily successful in protecting the vaccinated; even though they have not entirely thwarted breakthrough cases, they significantly reduce the likelihood of getting sick, and the people who do develop infections with evasive mutant variants rarely become seriously ill. Most notably, mRNA vaccines were the first ones to be released on the market, with Pfizer/BioNTech and Moderna winning the vaccine race exactly one year ago this month.

The next mRNA vaccines

In terms of their world-changing potential, mRNA vaccines have two key characteristics: They are quick to make, as demonstrated by the speed with which Pfizer/BioNTech and Moderna came out with their products, and by their very nature they are versatile.

As the Association of American Medical Colleges (AAMC) wrote in March, mRNA vaccine technology has the potential to treat diseases like malaria and cystic fibrosis, tuberculosis and hepatitis B. All scientists will have to do is modify RNA strands as needed to account for the different antigens (foreign substances recognized by the immune system as threats) produced by each pathogen. Instead of making do with the materials immediately available to them, mRNA vaccines make it possible for scientists to create more specialized weapons based on detailed knowledge of their enemies' specific characteristics.

Take the influenza epidemic. One so-called "holy grail" of immunology is a universal influenza vaccine. Right now there are four influenza viruses in circulation, all of which evolve so quickly that vaccines which were effective in one year may be obsolete by the next. This puts manufacturers in a crunch, as it takes at least six months to create the conventional vaccinations with attenuated viruses grown inside chicken eggs. The final product, though almost always safe, has a very hit-and-miss rate of effectiveness. An mRNA vaccine, by contrast, could in theory be designed to effectively fight all four strains and be quickly modified as necessary when they evolve. In addition, while conventional vaccine platforms have to hit a precise target in order to destroy a given intruder, an mRNA vaccine could target multiple parts of an influenza virus at once, overwhelming it with a full-body assault that can't be easily shaken off.

In fact, we already know that the early stages of mRNA flu vaccines were effective because scientists used that research to help develop their COVID-19 vaccines. This speaks to how malleable the platform is: While conventional vaccine platforms require patients to hope that the pathogen injected into their body is similar enough to a possible flu infection to be effective, mRNA vaccines could be precisely designed to meet the specific characteristics of each new strain as it emerges.

There will be challenges to pulling this off, of course. Anna Blakney, an RNA bioengineer at the University of British Columbia, told the journal Nature that there is no guarantee mRNA will be an effective vehicle for transporting haemagglutinin glycoproteins, the protein that flu vaccines use to fight the different bugs. As Blakney put it, "Did we just get really incredibly lucky with COVID vaccines because of the antigen design and the immunodominancy of that protein? Or have we stumbled on something that's functional for other viral glycoproteins as well?"

In addition to aiding in the war against influenza, mRNA vaccines could also be a game-changer in the fight against cancer. In the pre-mRNA vaccine world, the mere notion of a "cancer vaccine" would have seemed ludicrous; vaccines work by protecting your body against a foreign invader, and cancers (as far as we know) are caused by your own body producing mutated cells. Yet just as an mRNA vaccine can help your immune system recognize and destroy proteins associated with dangerous pathogens, they could in theory be developed to identify and eliminate proteins associated with cancer cells — and, of course, the cancer cells themselves.

"A successful therapeutic cancer vaccine should induce strong T cell responses, particularly with CD8+ T cells, which have a known capacity to kill malignant cells," Dr. Norbert Pardi, whose research led to the develop of the Pfizer and Moderna vaccines, explained to the University of Pennsylvania. "Therapeutic cancer vaccines would be given to cancer patients with the hope that those vaccine-induced cytotoxic T cells would clear tumor cells."

HIV mRNA vaccines are theorized to be possible, though there are massive hurdles to be overcome. The challenge so far has been that none of the vaccine candidates developed up to this point have produced broadly neutralizing antibodies, which are vital to blocking HIV in target cells. Scientists hope that an mRNA vaccine would create an immunogen (an antigen that induces an immune response) that resembles the HIV virus and can help the body develop those broadly neutralizing antibodies against it. Unfortunately, researchers are still very early in working through this, and it seems like a HIV vaccine using this technology is not in the near future.

"We certainly think that an HIV vaccine will be far and away the most complicated vaccine that we've ever had to put into the population," Derek Cain of Duke University's Human Vaccine Institute told The Guardian. "We don't expect it to work 100% or 90% like the Covid vaccines, but even if we can get to 50-60% that would be a success; 70% would be amazing."

The future for mRNA technology is not one of unbounded promise. As the AAMC noted, each virus poses its own individual puzzle, which makes it unlikely that other ailments can be treated with the rapid success that occurred when fighting COVID-19. Similarly, although the COVID-19 vaccines have so far not caused widespread serious side effects, this may not be true for other mRNA vaccines; more research will definitely be needed. In addition, the COVID-19 pandemic was such an overwhelming and serious crisis that the international community collaborated in fruitful ways that may not repeat themselves if a future outbreak seems less urgent.

There are also logistical factors to take into consideration. The supply chain breakdowns prompted by the pandemic are poised to get worse due to climate change, and experts are already concerned that mRNA vaccines will get destroyed as they are transported because they must be kept in very clean and ultra-cold conditions. It is hard to imagine that the impending supply chain deteriorations won't exacerbate that problem, as will the ongoing disease of misinformation. Since anti-vaccine advocates can alter their baseless beliefs as easily as viruses change their genetic composition, some of this misinformation specifically targets mRNA platforms. One particularly prevalent myth right now is that mRNA vaccines change your DNA, even though (as the above explanation makes clear) this betrays a deep ignorance about how vaccines, viruses, cellular biology and the immune system actually work.

Finally, as with all biotechnology, governments and businesses will have to adequately invest.

"Despite the promise of mRNA vaccines, we caution that they are far from a silver bullet for future pandemics," Michael J. Hogan and Norbert Pardi write in an Annual Review of Medicine article. "Comprehensive pandemic preparedness requires significant new investments in viral surveillance, proactive clinical testing of vaccines for pandemic-potential viruses, new diagnostic technologies, broad-spectrum antiviral treatments, and stockpiling of materials."