Trump has a meltdown on Truth Social after Cassidy Hutchinson's bombshell Jan. 6 testimony 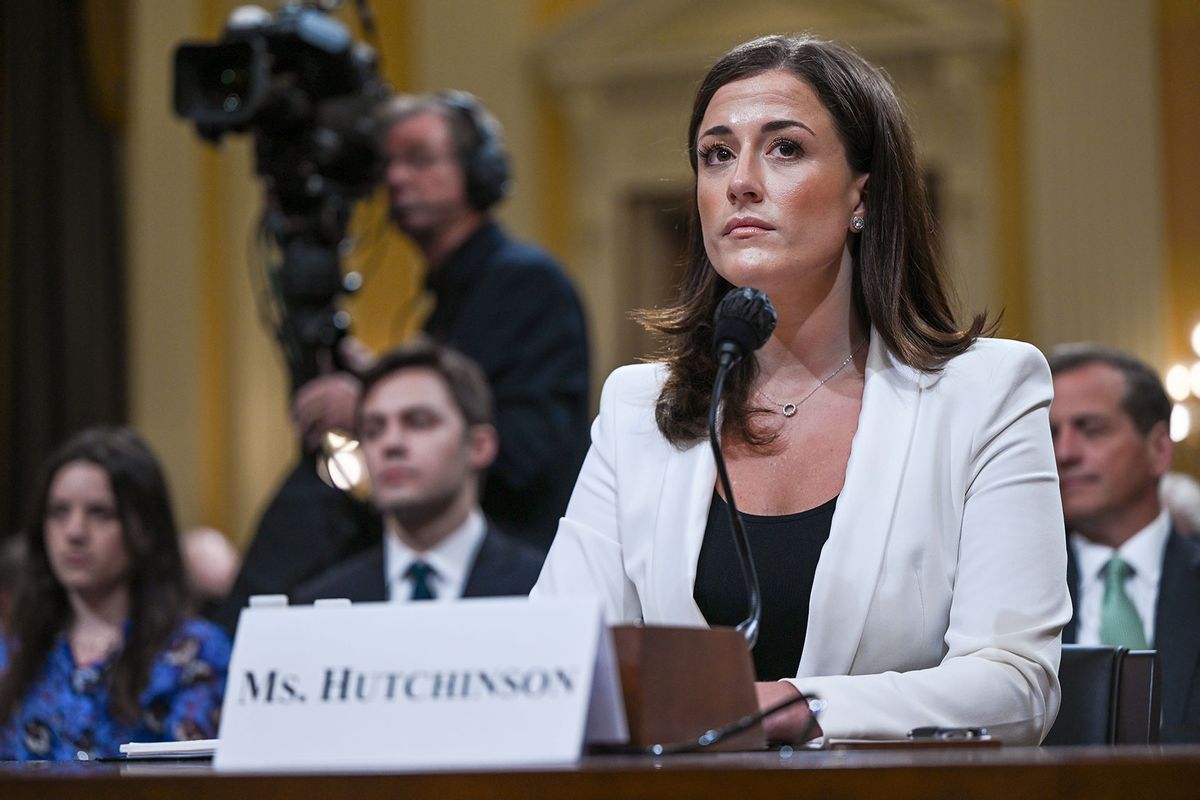 Donald Trump called Cassidy Hutchinson, the surprise witness in Tuesday's January 6 hearing, a "phony" after she delivered unprecedented testimony that the former president knew the Capitol riot could turn violent but did nothing to stop it.

"I hardly know who this person is … other than I heard very negative things about her (a total phony and a 'leaker')," Trump wrote over Truth Social, his social media platform. "She is bad news!"

Trump's remarks appear to be an attempt to discredit Hutchinson.

RELATED: Jan. 6 panel moved up hearing over fear that Meadows aide is in danger due to what she knows: report

On Tuesday, Hutchinson – a former top aide to Trump's chief of staff, Mark Meadows – claimed that, during the "Stop the Steal" rally, the former president knew that the Capitol rioters had weapons but dismissed concerns around potential violence.

"When we were in the offstage announce tent, I was part of a conversation — I was in the vicinity of a conversation where I overheard the president say something to the effect of, you know, 'I don't effing care that they have weapons. They're not here to hurt me. Take the effing [metal detecting] mags away. Let my people in. They can march to the Capitol from here. Let the people in. Take the effing mags away,'" she recounted to the panel.

Hutchinson also detailed numerous instances in which Trump himself engaged in unruly and violent behavior.

On the day of the riot, Hutchinson recounted, as Trump was being driven away from the vicinity, the former president demanded that he be driven to the Capitol building. When the Secret Service agent driving Trump did not comply with the order, the former president allegedly "grabbed" the agent's neck, as well as steering wheel, and said, "I'm the fucking president. Take me up to the Capitol now."

Hutchinson also described the president as a frequent thrower of dishes in moments of ire and was known to flip entire tablecloths, leaving food and drinks plastered on the floor.

In one episode, shortly after hearing his attorney general Bill Barr cast doubt over his claims of election fraud, Trump allegedly threw his lunch against the wall. He left the scene, she said, with "ketchup dripping down the wall."

RELATED: The gangster candidate: Donald Trump and his supporters behave like the mafia, with veiled threats and acting above the law

In a separate part of the hearing, committee member Liz Cheney, R-Wyo., who was questioning Hutchinson, revealed that witnesses who have been asked for testimony have received threatening, Mafia-style messages from Trump's inner circle in order to ensure that they remain "loyal" to the president.

"[A person] let me know you have your deposition tomorrow," one message, displayed during Tuesday's hearing, read. "He wants to let you know that he's thinking about you. He knows you're loyal, and you're going to do the right thing when you go in for your deposition."

The exhibits led many commentators to suggest that Trump had engaged in witness tampering.

On Twitter, House Republicans on the Judiciary Committee mocked Hutchinson.