50 migrants were found dead in a semitruck in San Antonio. Hundreds more have died in recent years 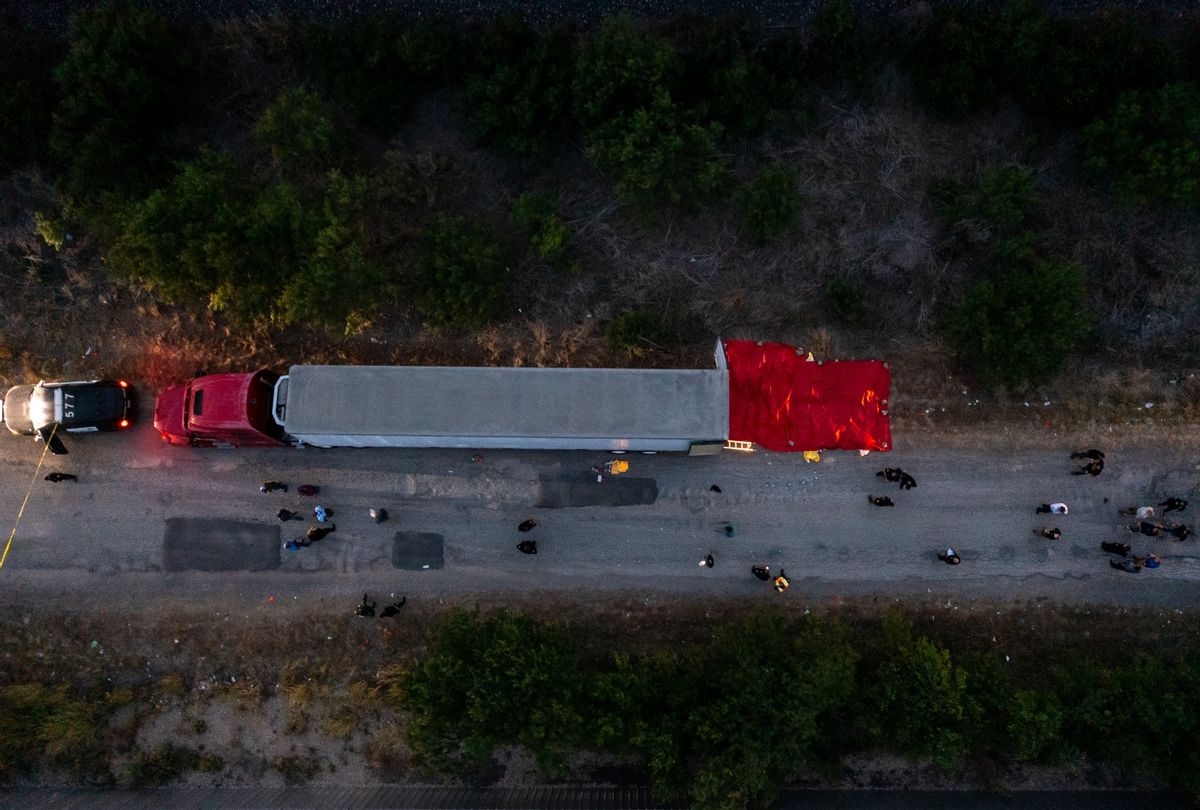 In this aerial view, members of law enforcement investigate a tractor trailer on June 27, 2022 in San Antonio, Texas. According to reports, at least 50 people, who are believed migrant workers from Mexico, were found dead in an abandoned tractor trailer. (Jordan Vonderhaar/Getty Images)
--

More than four dozen migrants were found dead in an overheated tractor-trailer on an industrial road in south San Antonio on Monday. Many of them had been sprinkled with steak seasoning in a possible attempt by smugglers to ward off authorities, law enforcement officials said.

The sheer scale and disturbing details, including migrants who apparently tried to escape the suffocating triple-digit temperatures inside the truck by jumping to their deaths along several city blocks, were horrific.

Large numbers of fatalities along the most heavily trafficked northbound path from Mexico and Central America, for decades the route of those seeking the American dream, are not unusual or unprecedented. Still, the staggering amount Monday, more than any in recent memory, stunned law enforcement and migrant advocates alike.

The magnitude may reflect more migrants seeking increasingly dangerous pathways to come here as enforcement policies along the border — both by the Biden administration and Texas Gov. Greg Abbott — have strengthened. Biden has kept in place a pandemic-era regulation from the Trump administration that expels many migrants immediately without asylum hearings.

Immigration officials have reported a record number of apprehensions at the southwest border under the Biden administration, with most single men and some families sent back to Mexico. People caught crossing repeatedly have also peaked under the administration's policies, which effectively curtail many asylum-seekers.

As the prospect of being able to stay in the U.S. and seek that protection has become more difficult, deaths have risen. At least 650 migrants died crossing the U.S.-Mexico border in 2021, more than in any other year since the International Organization for Migration, a part of the United Nations, began tracking the data in 2014.

"The border is more closed down now than almost any time in history," said Allison Norris, a supervising attorney for immigration legal services for the Catholic Charities of the Archdiocese of Washington. "This has led folks to increasingly seek out smugglers and engage in more dangerous ways of getting across the border."

She said most of her clients would prefer to turn themselves in to official ports of entry at the border and seek asylum rather than crossing illegally, which is usually much more dangerous and involves risky journeys through thick Texas brush or deserts and ruthless smugglers.

But under the Trump and Biden administrations' policies of expelling migrants or keeping them in Mexico to wait for their asylum hearings, that was more difficult, she said.

Before Monday, the worst smuggling-related mass fatality in recent Texas history was in 2003, when 19 people died after being trapped in an unrefrigerated dairy truck for hundreds of miles.

Authorities later estimated that the temperature rose above 170 degrees as the desperate migrants inside tried to claw their way out of the insulated trailer. The Houston-bound truck stopped in Victoria, where the driver unhitched the trailer and drove off.

Seventeen people were found dead in the trailer, and two later died. The driver was ultimately tried on federal charges and sentenced to 34 years in prison.

San Antonio was the scene of another mass tragedy in 2017, when 39 people were found in a truck trailer in a Walmart parking lot. Eight died in the truck, and two later at a hospital. The driver of the vehicle was sentenced to life in prison without parole.

In 1987, 19 men died after being left locked in a boxcar on a railroad siding near Sierra Blanca in far West Texas in what a Border Patrol official at the time called "a tragic series of errors and misjudgments."

The men had crossed into the United States near El Paso and were herded by a smuggler into a heavily insulated boxcar with massive thick floors and walls. The Dallas-bound car sat on a siding for hours as the temperature inside soared.

The men tried to escape, but the floors were too thick, a lone survivor later told authorities.

The use of commercial vehicles to smuggle people into the United States from Mexico, or move undocumented individuals already in the country, is a decadeslong problem. There is little evidence the problem has lessened with the enhanced presence of National Guard and Texas Department of Public Safety troopers along the Texas-Mexico border this past year as part of Abbott's controversial border security program, Operation Lone Star.

Earlier this month in Corpus Christi, a 24-year-old Mission resident pleaded guilty to federal smuggling charges for trying to transport 73 people in a tractor-trailer. He was arrested at the Border Patrol checkpoint near Falfurrias after a search of his vehicle found dozens of people inside from Ecuador, Guatemala, Honduras, Peru, Mexico and El Salvador.

In January, a Texas DPS trooper found 28 migrants hidden inside a tractor-trailer's sleeping cab. The driver has been charged with 28 counts of human smuggling and evading arrest.

DPS, through the governor's Operation Lone Star efforts, has tried to highlight how its efforts are working to stop illegal immigration, even as the number of migrants crossing the border into Texas has surged nearly every month.

On the agency's Facebook site, videos show arrests including one from March in Carrizo Springs, where 76 migrants were discovered inside a commercial truck.

Not all commercial vehicles used are large 18-wheelers. In April 2016, a Michigan man was arrested trying to illegally transport 10 undocumented individuals inside a padlocked Penske rental truck. The defendant told Border Patrol agents that he had picked up the truck in Laredo and was driving it to Corpus Christi. The driver had no key to the truck's rear cargo area, and temperatures were already in the 90s. An X-ray of the truck revealed the truck driver's human cargo.

In recent years, Mexico has stepped up its own policing of smuggling, under pressure from the United States. In 2019, more than 200 migrants were discovered hidden in secret compartments in various trucks by an X-ray scanner used by Mexico border officials.

The more than a dozen migrants, including children, who remain hospitalized from Monday's tragedy in San Antonio might qualify for visas providing legal residency in the United States for migrants who are crime victims or cooperating witnesses, said Norris, the attorney with Catholic Charities of the Archdiocese of Washington.

But some qualifying migrants could have a harder time tapping this immigration benefit because of Title 42, the pandemic health order the Trump and Biden administrations have used more than 2 million times since March 2020 to immediately expel a majority of recent border crossers, including asylum-seekers.

Taylor Levy, an immigration attorney in California, said it's likely that the surviving migrants could be held in federal custody during the investigation and ultimately kicked out of the country.

"Unfortunately, we have seen in the past that being victimized by one's smugglers is oftentimes insufficient to protect from being deported," Levy said.

Terri Langford contributed to this report.

Disclosure: Facebook and Walmart Stores Inc. have been financial supporters of The Texas Tribune, a nonprofit, nonpartisan news organization that is funded in part by donations from members, foundations and corporate sponsors. Financial supporters play no role in the Tribune's journalism. Find a complete list of them here.

Join us at The Texas Tribune Festival, happening Sept. 22-24 in downtown Austin, and hear from 300+ speakers shaping the future of Texas including Joe Straus, Jen Psaki, Joaquin Castro, Mayra Flores and many others. See all speakers announced to date and buy tickets.

This article originally appeared in The Texas Tribune at https://www.texastribune.org/2022/06/28/texas-migrant-deaths-smuggling/.