NATO and the Ukraine war: It took 30 years for Russia and the West to create this disaster

As NATO meets in Madrid, the Ukraine war is front and center. Will anyone be honest about how this happened? 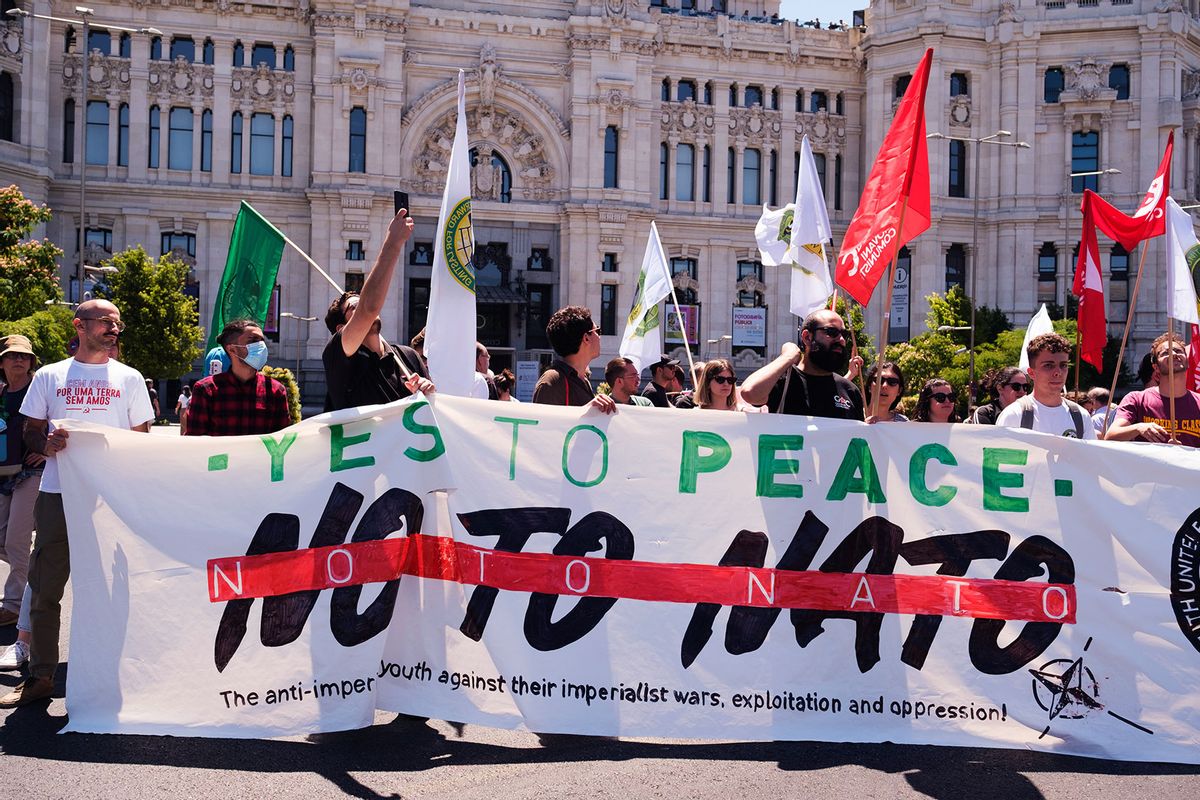 Protesters hold a banner that says "No to Nato" during a demonstration. The mobilization was to reject the summit of the Atlantic Alliance in Madrid, on June 29th and 30th. At the end of the protest, a manifesto was read advocating the dissolution of this intergovernmental military alliance governed by the North Atlantic Treaty Organization. (Atilano Garcia/SOPA Images/LightRocket via Getty Images)
--

As NATO holds its summit in Madrid this week, the war in Ukraine is taking center stage. During a pre-summit June 22 talk with Politico, NATO Secretary General Jens Stoltenberg bragged about how well-prepared NATO was for this fight because, he said: "This was an invasion that was predicted, foreseen by our intelligence services." Stoltenberg was talking about Western intelligence predictions in the months leading up to the Feb. 24 invasion, when Russia insisted it was not going to attack. Stoltenberg, however, could well have been talking about predictions that went back not just months before the invasion, but decades.

Stoltenberg could have looked all the way back to when the USSR was dissolving, and highlighted a 1990 State Department memo warning that creating an "anti-Soviet coalition" of NATO countries along the USSR's border "would be perceived very negatively by the Soviets."

Stoltenberg could have reflected on the consequences of all the broken promises by Western officials that NATO would not expand eastward. Secretary of State James Baker's famous assurance to Soviet President Mikhail Gorbachev was just one example. Declassified U.S., Soviet, German, British and French documents posted by the National Security Archive reveal multiple assurances by Western leaders to Gorbachev and other Soviet officials throughout the process of German unification in 1990 and 1991.

RELATED: What really caused the war in Ukraine? Global anarchy — and there's a way to fix it

The NATO secretary general could have recalled the 1997 letter by 50 prominent foreign policy experts, calling Bill Clinton's plans to enlarge NATO a policy error of "historic proportions" that would "unsettle European stability." But Clinton had already made a commitment to invite Poland into the club, reportedly out of concern that saying "no" to Poland would lose him critical Polish-American votes in the Midwest in the 1996 election.

Stoltenberg could have remembered the prediction made by George Kennan, the intellectual father of U.S. containment policy during the Cold War, when NATO moved ahead and incorporated Poland, the Czech Republic and Hungary in 1998. In a New York Times interview, Kennan called NATO expansion a "tragic mistake" that marked the beginning of a new Cold War, and warned that the Russians would "gradually react quite adversely."

George Kennan, the father of U.S. Cold War policy, warned in 1998 that NATO expansion was a "tragic mistake" that could lead the Russians to "react quite adversely."

After seven more Eastern European countries joined NATO in 2004, including the Baltic states of Estonia, Latvia and Lithuania, which had actually been part of the former Soviet Union, the hostility increased further. Stoltenberg could have just considered the words of President Vladimir Putin himself, who said on many occasions that NATO enlargement represented "a serious provocation." In 2007, at the Munich Security Conference, Putin asked, "What happened to the assurances our Western partners made after the dissolution of the Warsaw Pact?"

But it was the 2008 NATO summit, when NATO ignored Russia's vehement opposition and promised that Ukraine would join NATO, that really set off alarm bells.

William Burns, then the U.S. ambassador to Moscow, sent an urgent memo to Secretary of State Condoleezza Rice. "Ukrainian entry into NATO is the brightest of all redlines for the Russian elite (not just Putin)," he wrote. "In more than two and a half years of conversations with key Russian players, from knuckle-draggers in the dark recesses of the Kremlin to Putin's sharpest liberal critics, I have yet to find anyone who views Ukraine in NATO as anything other than a direct challenge to Russian interests."

Instead of comprehending the danger of crossing "the brightest of all redlines," President George W. Bush persisted and pushed through internal opposition within NATO to proclaim, in 2008, that Ukraine would indeed be granted membership, but at an unspecified date. Stoltenberg could well have traced the present conflict back to that NATO summit — which took place well before the 2014 Euromaidan coup or Russia's seizure of Crimea or the failure of the Minsk Agreements to end the civil war in the Donbas.

This was indeed a war foretold. Thirty years of warnings and predictions turned out to be all too accurate. But they all went unheeded by an institution that measured its success only in terms of its own endless expansion instead of by the security it promised but repeatedly failed to deliver, most of all to the victims of its own aggression in Serbia, Afghanistan and Libya.

Now Russia has launched a brutal, illegal war that has uprooted millions of innocent Ukrainians from their homes, killed and injured thousands of civilians and is taking the lives of more than a hundred Ukrainian soldiers every day. NATO is determined to keep sending massive amounts of weapons to fuel the war, while millions around the world suffer from the growing economic fallout of the conflict.

We can't go back and undo Russia's catastrophic decision to invade Ukraine or NATO's historic blunders. But Western leaders can make wiser strategic decisions going forward. Those should include a commitment to allow Ukraine to become a neutral, non-NATO state, something that President Volodymyr Zelenskyy himself agreed to in principle early on in the war.

And instead of exploiting this crisis to expand even further, NATO should suspend all new or pending membership applications until the current crisis has been resolved. That is what a genuine mutual security organization would do, in sharp contrast to the opportunistic behavior of this aggressive military alliance.

But we'll make our own prediction based on NATO's past behavior. Instead of calling for compromises on all sides to end the bloodshed, this dangerous alliance will instead promise an endless supply of weapons to help Ukraine "win" an unwinnable war, and will continue to seek out and seize every chance to engorge itself at the expense of human life and global security.

While the world determines how to hold Russia accountable for the horrors it is committing in Ukraine, the members of NATO should do some honest self-reflection. They should realize that the only permanent solution to the hostility generated by this exclusive, divisive alliance is to dismantle NATO and replace it with an inclusive framework that provides security to all of Europe's countries and people, without threatening Russia or blindly following the United States in its insatiable and anachronistic hegemonic ambitions.

Read more on the conflict with Ukraine: