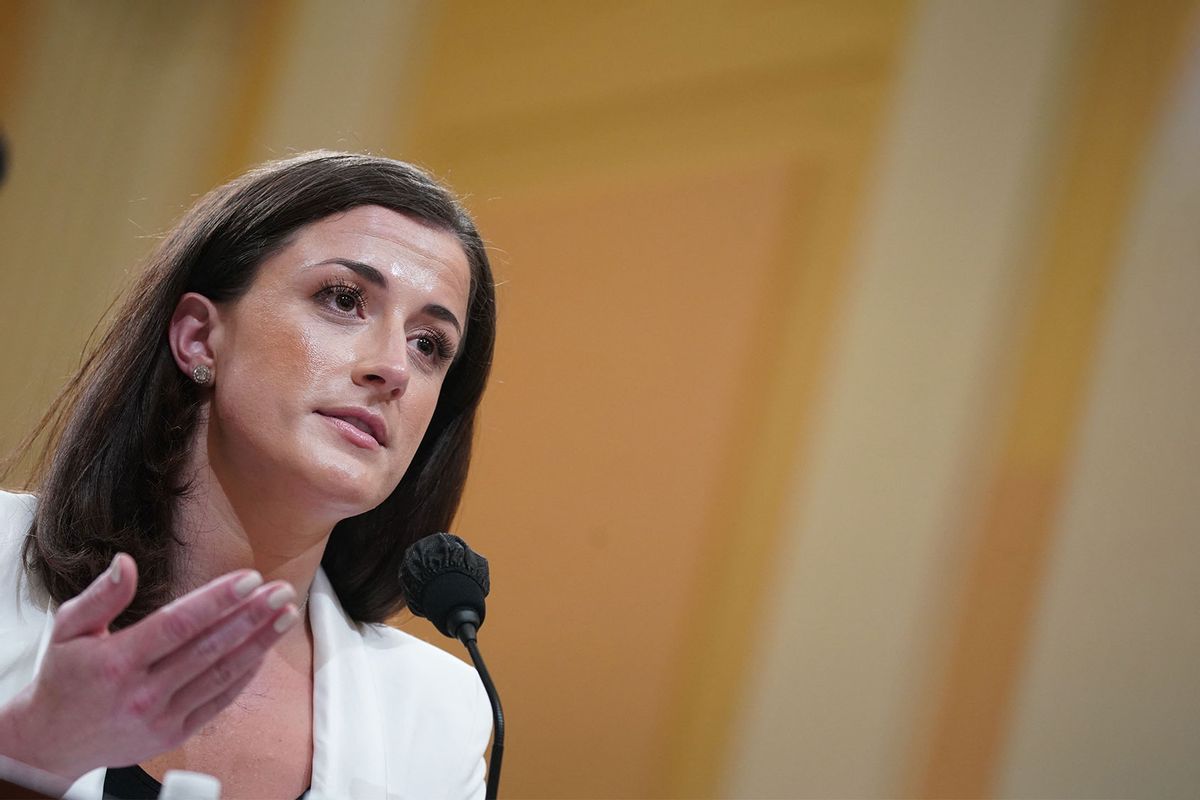 Cassidy Hutchinson, a top aide to former White House Chief of Staff Mark Meadows, testifies during the sixth hearing by the House Select Committee to Investigate the January 6th Attack on the US Capitol, in Washington, DC, on June 28, 2022. (STEFANI REYNOLDS/AFP via Getty Images)
--

A reporter who has written a book on the Secret Service shredded the credibility of a former agent who has pushed back against Cassidy Hutchinson's bombshell testimony.

The former White House aide testified that Tony Ornato, who moved from the Secret Service to deputy chief of staff, told her that Donald Trump became irate when his security detail would not take him to the U.S. Capitol on Jan. 6, 2021, and lunged for the steering wheel of his armored SUV and physically attacked his lead agent, and Washington Post reporter Carol Leonnig poured cold water on his denials.

"This is a person who worked as President Trump's security detail leader, and the boss liked him so much he installed him in a political White House job," Leonnig told MSNBC's "Morning Joe." "That broke every Secret Service tradition in the book because he stayed as a Secret Service employee, but Trump essentially had him directing the Secret Service to make sure that all of its campaigns events, all of his photo ops, everything that he wanted to do to get re-elected went off without a hitch."

"That included paid rallies that caused COVID surges and included the forcible clearing of peaceful protesters from Lafayette Square," Leonnig continued. "Tony was the secret hand behind all of that, and that is what Trump wanted. Trump White House staffers and Secret Service agents have told me repeatedly, he's a Trump acolyte. He will defend the president to the end, and he remains in contact with Trumpworld, so I want to stress that also Tony Ornoto has indicated that this story Cassidy Hutchinson told didn't happen. Well, Tony Ornato said a lot of things didn't happen. He tried to say to the press and to me indirectly that the clearing of Lafayette Square was not done for President Trump's photo on, that's not true. He was at the center of that, so I take the points because they're saying in their experience, things that we reported, Tony tried to deny."

"The Secret Service often tries to deny things that are unflattering, and then when the rubber hits the road, we learn there is a little bit more to it," Leonnig added. "I want to give everyone the benefit of the doubt, and if Tony Ornato testified under oath that he exaggerated this story and it didn't happen in the limo, forgive me, in the Suburban on Jan. 6, as she relayed, then that is important and we should take that seriously."