Trump's "get out of jail free" card: A second presidential run 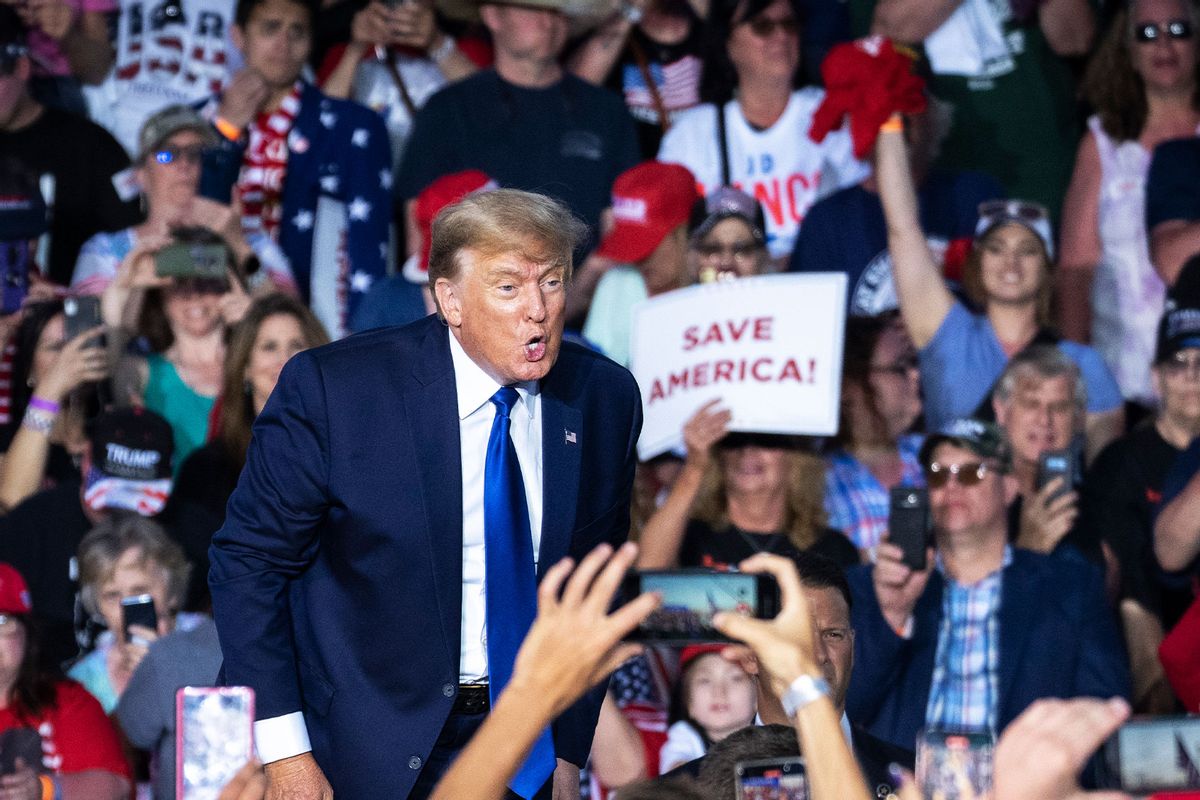 Former U.S. President Donald Trump exits the stage after speaking during a rally hosted by the former president at the Delaware County Fairgrounds on April 23, 2022 in Delaware, Ohio. (Drew Angerer/Getty Images)
--

If there's one thing former president Donald Trump knows very well, it's the fact that the Department of Justice has a hard and fast policy against indicting a sitting president. He heard it hundreds of times during the Mueller investigation from every TV lawyer in the country as well as his own, including the White House counsel. And even though the Mueller Report laid out several possible counts of obstruction of justice, clearly intended to be triggered once Trump was out of office, nothing ever happened. It's pretty clear that Trump understands the presidency to be a "get-out-of-jail-free" card. Right now he probably could use one.

Giuliani, you'll recall, testified at a hearing after the election in which he claimed he had proof that Georgia election workers pulled suitcases full of ballots out from under a table to pad Biden's vote count, a charge which was investigated and totally refuted by the Republican Secretary of State Brad Raffensperger's office. That didn't stop Giuliani and others, including Trump, from spreading the lie anyway, resulting in death threats to the election workers they targeted with their bogus story, Ruby Freeman and her daughter Shaye Moss, both of whom movingly testified before the January 6th Committee. Giuliani has never backed off his claims to this day.

It's pretty clear that Trump understands the presidency to be a "get out of jail free" card.

John Eastman, the constitutional scholar most responsible for the plot to have Mike Pence single-handedly reject the electoral college votes on January 6th, also appeared at a hearing and told Georgia officials that they had the power to simply appoint new electors for Donald Trump, which is, of course, crazy. Ellis wrote some memos passing on the same rationales and she and Deason spoke at the same hearing. Chesbro is alleged to have worked with a local GOP chairman to get fake electors to meet secretly in the state capitol. Last, but not least, Sen. Graham called up Geogia's Secretary of State twice to see if there wasn't some way they could throw out absentee votes for Biden.

Trump himself wasn't subpoenaed but since Raffensperger has reportedly already testified and they may have introduced the audio recording of Trump attempting to coerce him into "finding" one more vote than he needed to overturn the election, perhaps it's unnecessary. There's plenty of evidence of his attempts to strong-arm Georgia officials into cheating on his behalf without hearing a word from him.

These subpoenas come on the heels of a flurry of activity in recent days by the Justice Department in which John Eastman and former DOJ official Jeffrey Clark were served search warrants and various GOP activists and officials around the country who were involved in the fake elector scheme were served with federal subpoenas.

The fake elector scheme is of particular interest to the feds for the simple reason that there is a paper trail showing that in Wisconsin, Nevada Georgia, Arizona, and Michigan they signed certificates which claimed they were their states' "duly appointed electors." (In two other states, someone had the presence of mind to add language which said those votes would only be counted if the courts determined that the original count was invalid.) According to various legal observers, these false statements could easily lead to charges of defrauding the United States.

They tried to fraudulently cast votes in the electoral college. It truly is the most egregious example of election fraud in U.S. history. The irony of that is so thick you can only cut through it with a chainsaw.

It truly is the most egregious example of election fraud in U.S. history.

Meanwhile, we have the January 6th Committee making news every week with more evidence of Trump and his henchmen organizing the attempted coup from the White House. The last hearing, featuring testimony by Cassidy Hutchinson, a former aide to the White House Chief of Staff Mark Meadows, showed that Trump was aware of the potential for violence on January 6th and even knew there were armed people in the crowd when he riled them all up and told them to go to the Capitol. Trump was particularly perturbed by this testimony and had been engaged in hysterical character assassination every since, posting insult after insult on his Truth Social account day after day.

All of this coming to a head, with reports that big donors are spending heavily on some of his potential rivals for the nomination who smell blood in the water, has Trump and his people putting out the word that he may be planning to announce his candidacy for 2024 before the midterms, perhaps any day now. It may be that he wants to crush these nascent candidacies and there are good reasons for him to want to get the money flowing away from such upstarts as Ron DeSantis, who is almost certainly preparing a bid. According to the New York Times, Republican officials are ambivalent about this early announcement because they don't want to relitigate his false claims of election fraud and give Democrats a chance to use Trump as a foil during the midterm elections.

But Trump doesn't care about that. His personal needs are far more urgent. The Guardian, reports that "Trump has reportedly told advisers that declaring a run for the White House now would allow him to strengthen his argument that other criminal investigations against him in New York and Georgia are politically motivated."

It's also possible that he believes that the DOJ, being burned by the scandal with James Comey and the Hillary Clinton email debacle of 2016, simply cannot indict a former president, presidential candidate and front runner for the nomination before an election, even if it's years in advance. He would certainly make hay out of it if they tried. The sooner he announces the safer he believes he will be. Sadly, he may be right.