Of course Trump is trying to intimidate future witnesses. He knows indictments are coming — and he's terrified 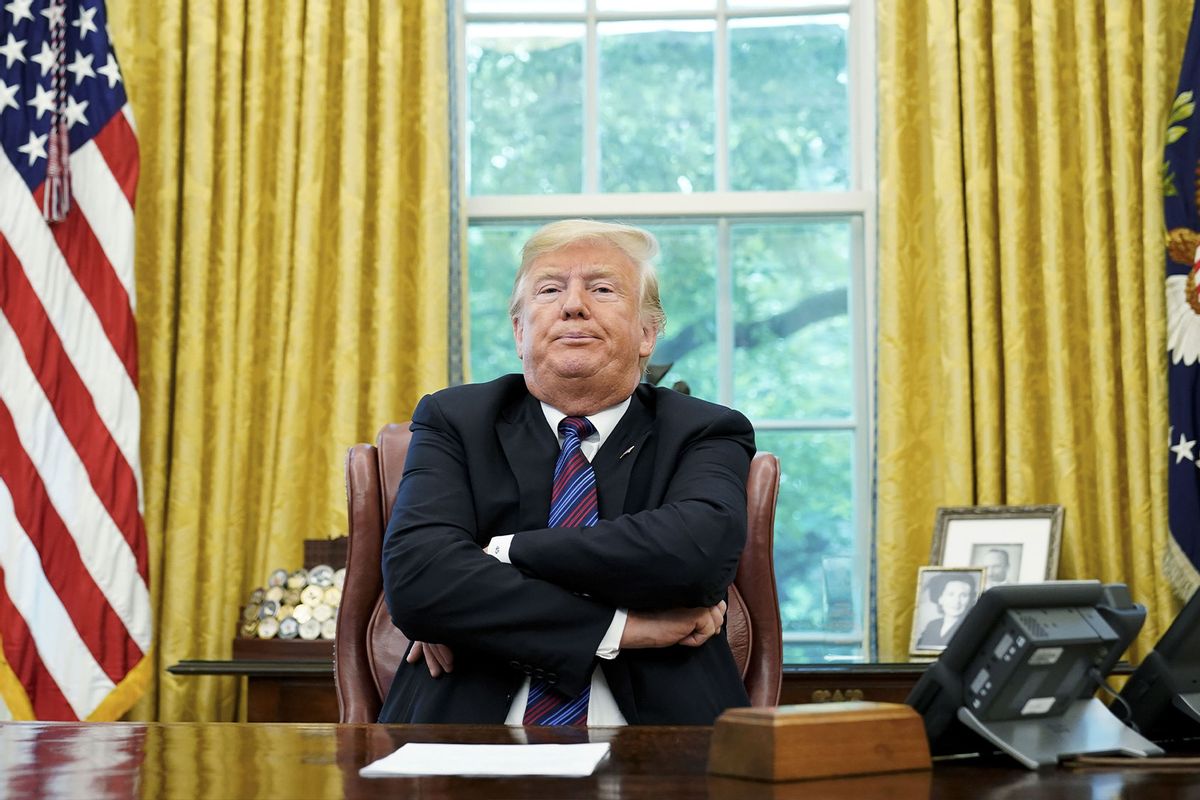 He should've been an Adderall-stoked tour director on a spring-break bus loaded with drunken college kids: "Be there, will be wild!"

He would've been obnoxious, and noxious — but mostly harmless. Declawed, defanged and destructive, but ultimately forgotten by history.

Our Donald, being the rage-fueled, narcissistic, power-mongering loser that he is, cannot go gentle, genteel or gentile into that good night. So he used his God-given talent for blatant hucksterism in some twisted Darth Vader moment on Dec. 19, 2020. He tweeted out a call to arms for a "Big Protest in D.C. on January 6th. Be there, will be wild!"

If he had only thought to set up a turnstile and charge $25 a pop for admission, it would have been — in his warped, Swiss-cheese mind — perfect.

But nothing in this world is perfect, and Donald Trump is living proof of that every day he sucks in air and expels noxious vapor.

Was this finally enough? Trump and his terrorist confederates must be prosecuted

Trump of course was known, before stumbling into the presidency, mostly as a Hollywood sideshow; a poser who would show up in cameos, as he did in "Home Alone." That changed when he took center stage in 2004 on the show "The Apprentice." There he reached a convergence of his ego, his need for attention and his relentless grifting. He went primetime in a reality show that was known for being long on show and short on reality. "You're fired" was his catchphrase.

People ate it up, of course. And his timing was fortuitous. "Frasier" and "Friends" had anchored the Thursday night comedy lineup that began on NBC with "Cheers" in the '80s. Those shows left. Trump took over a 9 p.m. time slot and did fine with it. Some thought his show to be parody — like a sketch on "Saturday Night Live" — thus the inclusion in the Thursday night lineup. But it wasn't comedy. It was tragedy; Don the Con took himself seriously. His greatest con job? He conned himself.

His run for the presidency was both a revenge tour for Barack Obama slighting him at a White House Correspondents dinner and, as his former fixer Michael Cohen put it, "the best infomercial in history — to raise the profile of the Trump brand."

No one was more surprised than Trump when he actually won. After calling the White House a dump when he settled in, he gradually grew to love the seat of power on Pennsylvania Avenue. Many scandals and grifts later, he didn't want to give it up. Where "The Apprentice" gave him a taste of notoriety, the White House fed Trump's massive ego and narcissistic desires as only the office of the presidency can. "He only cared for himself," Cohen warned us. Cohen was right.

He was also right in warning us that Trump wouldn't accept a peaceful transfer of power, but by the time the 2020 election rolled around a majority of the American people had had enough of the orange-hued con man and voted him out. Trump didn't want to go, would never admit he lost and fought like a sewer rat with a rancid piece of pizza in his mouth to stay. Thus he "would galvanize his followers, unleash a political firestorm and change the course of our history as a country," as Rep. Jamie Raskin told us in the latest Jan. 6 hearing on Tuesday.

Complicit in Trump's attempt to overthrow the government he ran were social media platforms like Twitter. Employees have said they knew they were amplifying calls to violence. Nothing was done. Many on Trump's staff knew Trump had lost the election and did nothing to stop him from trying to stage a coup. No one stopped him. Cassidy Hutchinson, the aide to Mark Meadows who would later offer bombshell  testimony before the Jan. 6 committee, tweeted out "The West Wing is UNHINGED." I never knew the West Wing to be hinged — at least not while Trump was there.

More importantly, the Proud Boys and the Oath Keepers knew what Trump wanted; a big bright fiery show. A dramatic takeover. A rousing third act. "It's time for the DAY OF THE ROPE! WHITE REVOLUTION IS THE ONLY SOLUTION," read one tweet. "Cops don't have 'standing' if they are laying on the ground in a pool of their own blood," read another.

Ironically, the committee read that tweet in front of a packed house that included several of the officers injured and traumatized on Jan. 6, 2021.

The Proud Boys and Oath Keepers knew exactly what Trump wanted: "It's time for the DAY OF THE ROPE! WHITE REVOLUTION IS THE ONLY SOLUTION."

"Why don't we just kill them," or "We need volunteers for the firing squad," were tweets also shared by those who rioted. "Is the 6th D-Day? Is that why Trump wants everyone there?" asked another. Indeed he did. Mike Flynn, Rudy Giuliani and Sidney Powell (whose videotaped testimony about sedition was casually offered between swigs of Diet Dr. Pepper) encouraged the riot, according to witnesses, in a six-hour-long argument on Dec. 18 that went from room to room in the White House. Giuliani accused those who recommended Trump end his fight of being "pussies."

Judd Deere, the only member of Trump's press staff universally trusted by members of the press, testified that Trump was typically Trump that day — refusing to give in and acting as if he could by sheer force of his gnarled ego stay in office. He left the outside door to the Oval Office open so he could bask in the glow of people shouting his name.

Then, on Jan. 6, Trump let the crowd on the Ellipse know he meant business. He showed up and encouraged them to storm the Capitol. He screamed, "Fight! Fight! Fight!" as if he were a high school cheerleader.

This was Trump at the height of his power. His four years of fascism culminated in a violent group assembled in our nation's capital set on destroying the rule of law and installing Trump as dictator, with powers to destroy the Constitution.

For seven episodes now, the Jan. 6 committee hearings have proven to be far better television than Trump ever created on "The Apprentice" — and part of him no doubt loves the attention. Hell, he probably bathes in it. He's a hit!

But his niece, Mary Trump, told me this week that her uncle, for the first time in a long time, is truly afraid. "Though I'm concerned if anything will be done," she said. Perhaps that fear is why he's tried to reach out to potential witnesses. Rep. Liz Cheney fired a shot across Trump's broad brow Tuesday afternoon — warning him not to try any more witness tampering — after she announced he had tried to call someone who has not yet testified.

Congress, responding to Trump's own masterful manipulation of the media, has learned a thing or two. Raskin said Watergate was like a "Cub Scout meeting" compared to the Trump scandal. He's right. But the Watergate hearings were campfire storytelling compared to the "Stranger Things" production of the Trump hearings. Hell, this production could win an Emmy. It's masterful, especially in the hands of Raskin. It's one of the best-scripted live documentaries ever made — complete with cliffhangers and previews of the next exciting, terrifying and eventful episode. All that's missing are the after-credit scenes. Maybe we'll see Trump in irons after the last hearing. Who knows?

There are those who still fear that will never happen. Mark Meadows, it is reasoned, will eventually take the fall for Trump. But Liz Cheney is coming for Trump, and I wouldn't want to get in her way. While Mary Trump isn't a fan of Cheney's politics, she too says Uncle Donald has every reason to be afraid. Cheney is everything Donald Trump can't handle — an intelligent woman immune to his charms and threats, who has the facts at her side as she pursues the Mind Flayer.

"Trump is a 76-year-old man," Cheney reminded us, not "an impressionable child," and he "is responsible for his own actions and choices." Trump can't hide behind his minions. He knew the election was not stolen. "No rational or sane man could ignore this and come to another conclusion," she added, then concluded that Trump "cannot escape by being willfully blind."

You've never needed to convince me or the many disinterested third-party observers who went to the Capitol on Jan. 6 to witness that sad day in our history. I felt safer in Ukraine during a war. I knew where the enemy was and I could protect myself. None of us knew who among those at the Capitol was friend or foe that day.

Donald Trump led, encouraged and planned that insurrection, and loved watching it. It was his magnum opus. His final aria. His version of Beethoven's "Ode to Joy." He relished in it. It was theater for Trump — as his entire life has been. Taking a page from Donald's playbook, the Jan. 6 committee is using theater to expose his wretchedness.

Trump led, encouraged and planned that insurrection, and loved every minute of it. It was his magnum opus. His final aria. His version of "Ode to Joy."

Donald Trump is a garbage can brought to life. He is the bottom of a dumpster that hasn't been cleaned for a lifetime, sprung to life as a rancid pestilence. He appeals to your darker angels. He gives people permission to be as horrible as they want to be. The Jan. 6 hearings are slowly backing him into a corner, connecting the dots and exposing his vicious, seditious activities for the anti-democratic crap they truly are.

Trump is a fascist. Trump is a liar. Trump is dangerous. Ultimately Trump is a traitor to the ideals enshrined in our Constitution. The seventh hearing on this fetid stench leaves just one important question unanswered: Will the Department of Justice indict Trump, Mark Meadows, Rudy Giuliani, John Eastman, Jeffrey Clark, Sidney Powell and others?

It is obvious that Liz Cheney, by mentioning the DOJ at the close of this week's hearing, believes that indictments are forthcoming. There are those who still doubt it and who believe Attorney General Merrick Garland is not up to the task. But the 32 federal lawmakers I've spoken with since Tuesday all believe Trump's indictment will be coming. "It has to, or this means nothing and as a country we are done," one told me.

So how did Trump respond on Wednesday?

He sent out emails promoting his Trump "commemorative" golf balls along with one encouraging his supporters to buy authentic "Trump Ultra Maga Shirts," for just $45.

The grift goes on — stay tuned for the next exciting episode.