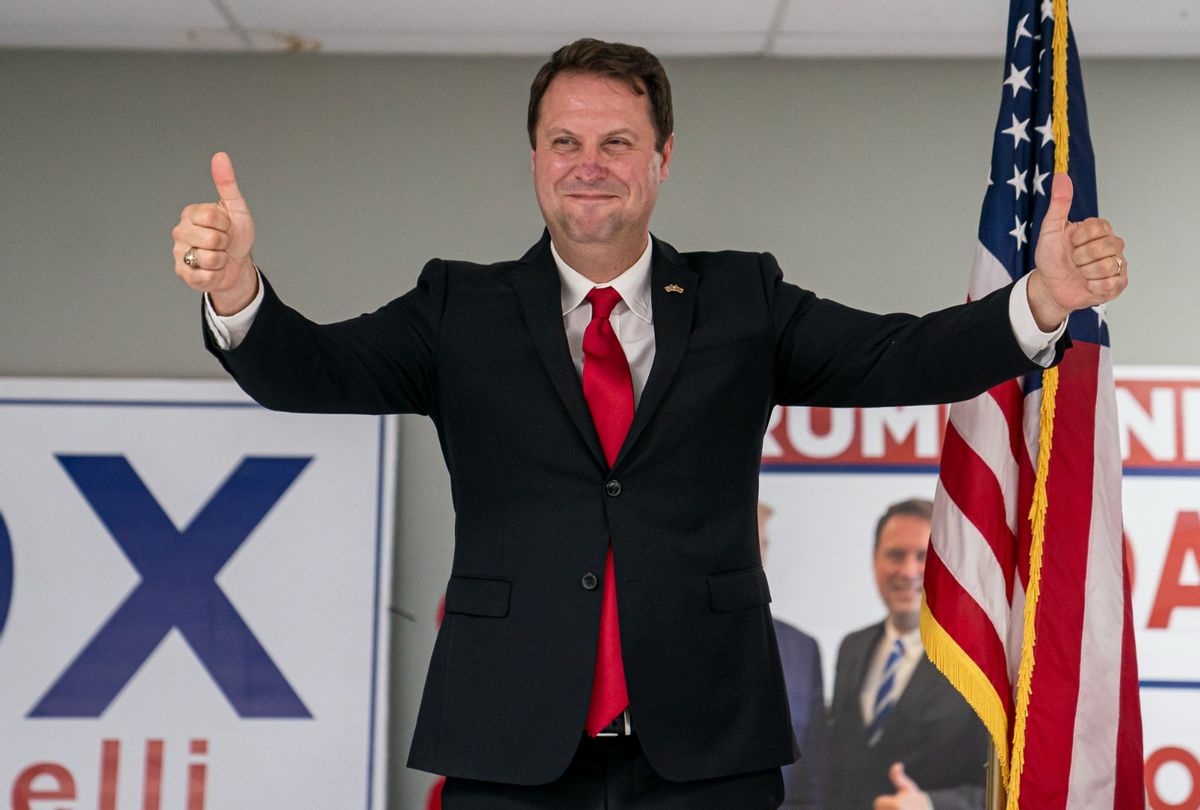 Dan Cox, a candidate for the Republican gubernatorial nomination, reacts to his primary win on July 19, 2022 in Emmitsburg, Maryland. (Nathan Howard/Getty Images)
--

Hogan, a prominent Trump critic who supported Schulz, repeatedly blasted Cox during the campaign over his extremist views, labeling him a "QAnon whackjob" after he spoke at a QAnon rally in April.

Cox fully embraced Trump's repeatedly debunked conspiracy theories about the election, declaring in December that Trump was "the only president that I recognize." He pushed conspiracy theories about widespread voter fraud and called on Trump to "seize federal vote machines in states where fraud was overwhelmingly rampant" even though Trump and his allies found no evidence of any widespread fraud.

Cox chartered three buses to bring supporters to Trump's D.C. rally on Jan. 6, ahead of the deadly riot. He called Pence a "traitor" on Twitter as a mob of Trump's supporters attacked Capitol police officers and hunted lawmakers through the halls of Congress. And he expressed support for Proud Boys leader Enrique Tarrio, who was charged with seditious conspiracy over his role in the attack along with other members.

Cox has vowed to conduct a so-called "forensic audit" of the 2020 election in Maryland if he wins even though Trump lost the state by a whopping 33 points. He has also fully embraced the conservative culture war, vowing to outlaw all abortions in the state and ban what he described as "sexual indoctrination" in public schools.

It's unclear whom Cox will face in November. Wes Moore, an Army veteran, author and entrepreneur endorsed by Oprah Winfrey, led former Democratic National Committee Chairman Tom Perez 36-27 on Wednesday afternoon with the race too early to call.

Democrats bet big that Cox would be the easier general election opponent. Cox, whose campaign raised little money, benefited from more than $1.1 million in ad spending by the Democratic Governors Association to boost his campaign. Hogan after Tuesday's primary tweeted that Trump "selfishly colluded with national Democrats to cost us a Governor's seat in Maryland where I ran 45 points ahead of him."

Schulz predicted that Cox would lose the general election by 30 points in a state that has Democratic supermajorities in the legislature despite twice electing a moderate Republican as governor. She said last month that Democrats were attempting to "spend a million now and save $5 million by not having to face me in the general election."

"The Maryland Republican Party got together and committed ritualized mass suicide," top Schulz aide Doug Mayer told The New York Times. "The only thing that was missing was Jim Jones and a cup of Kool-Aid."

Despite Cox's conspiracy theory mongering and far-right policy views, he is "not even the most extreme candidate who won on Tuesday," noted Vice News' Cameron Joseph.

"A neo-Confederate? That would be kind of like you're a fake Confederate or a wannabe Confederate," he said in 2014, after being elected to the Anne Arundel County Council.  "If anything, I want to be just a true Confederate."

Peroutka, a former board member of the neo-Confederate League of the South, which later helped organize the deadly Charlottesville white supremacist rally, has also said that he is "still angry" that Maryland was blocked from seceding during the Civil War," Vice News reported earlier this week.

Peroutka has said he wants political leaders to "take a biblical worldview and apply it to civil law and government." He has argued that abortion and gay marriage are illegal because they violate "God's law." And he has called public education a communist plot.

Though Peroutka was for years considered fringe, his ascent in Republican politics shows that there is an "increasingly overt and aggressive Christian nationalism" in the party, Peter Montgomery, who monitored Peroutka for years at Right Wing Watch, told Vice News.

It's unclear whether even Peroutka's Republican primary opponent will vote for him in November.

"That's a very tough decision for me to make knowing what his history is," Shalleck told the outlet. "His background concerns me very much."

The two wins highlight how "radicalized and conspiracy theory-minded a significant segment of the Republican base has grown in response to COVID and Trump's lies about the 2020 election—even in a Democratic-leaning state like Maryland," Joseph wrote. Cox and Peroutka, he added on Twitter, "might be the most extreme pair of GOP nominees *anywhere* in the US."

about the 2022 GOP primaries