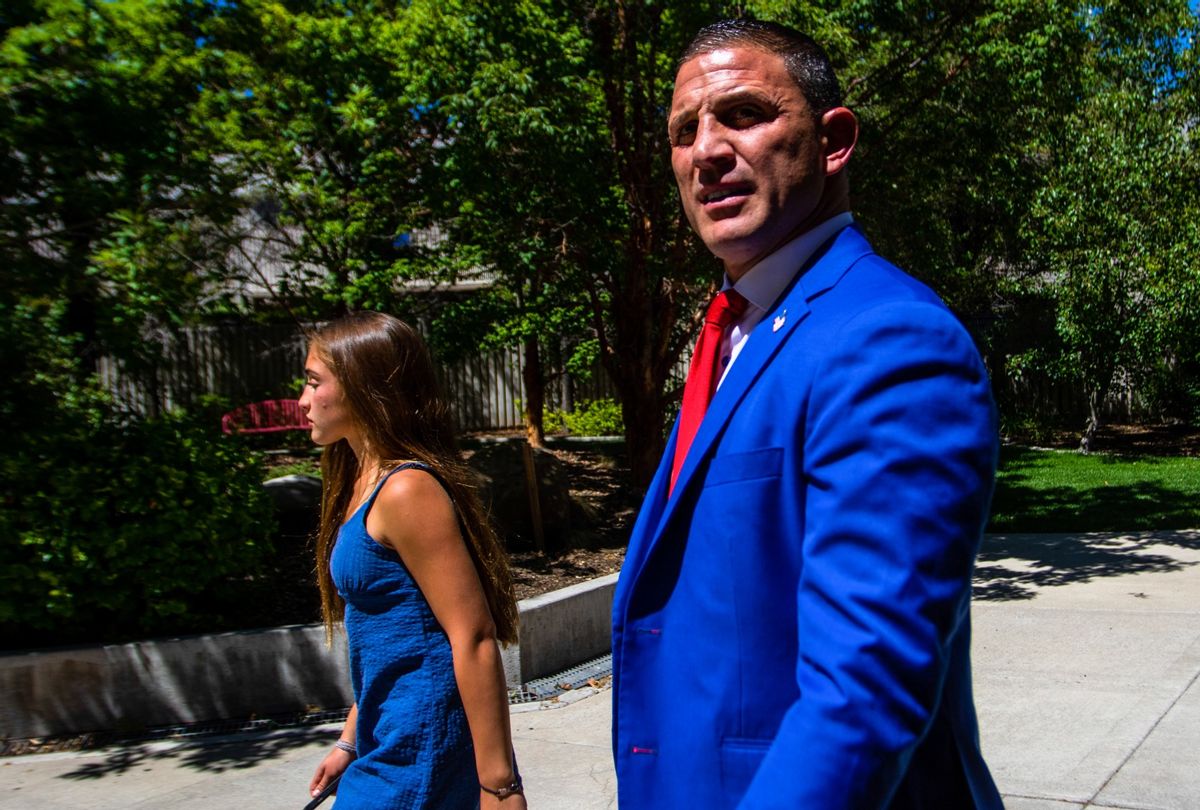 Failed far-right Nevada Republican gubernatorial candidate Joey Gilbert filed a lawsuit seeking to overturn his primary defeat, citing an "analysis" that found his loss to be a "mathematical impossibility" even after a recount he requested confirmed the results.

Gilbert on Friday filed a lawsuit on Friday in Carson City seeking to overturn his loss. The suit claims that Lombardo's win is a "mathematical impossibility." Once the results are "statistically corrected," said a copy of the complaint obtained by The Nevada Independent, will show "with irrefutable geometric finality" that Gilbert won by more than 55,000 votes.

Nevada counties already completed a recount sought by Gilbert, which confirmed that he lost to Lombardo by more than 20,000 votes.

The suit raises questions about Gilbert's differing vote shares among early, mail-in and Election Day ballots, which the suit argues is a "geometric impossibility" derived through an "illegal formula."

The lawsuit cites an analysis by an "expert mathematician" to claim that thousands of Gilbert votes were "drawn illegally" into Gov. Steve Sisolak's pool of voters in the Democratic primary and, once "corrected," would show that Gilbert defeated Lombardo by more than 50,000 votes.

The "expert mathematician" cited by Gilbert is infamous election conspiracy theorist Edward Solomon, who falsely claimed to have found evidence that the 2020 presidential election was rigged using an algorithm — a claim repeatedly debunked by expert fact-checkers, who noted that Solomon's claims show a "basic misunderstanding of how vote counts work."

Dominion Voting Systems, the voting tech company at the heart of one of Trumpworld's debunked conspiracy theories, said in a lawsuit against right-wing network OAN that Solomon is a "convicted drug dealer who never graduated college and whose current job was setting up swing sets in Long Island, New York."

Despite no tangible evidence and a reliance on a discredited "expert," Gilbert's supporters say the lawsuit is a "slam dunk."

"Joey Gilbert rightfully won the primary with 100% certainty," Robert Beadles, a cryptocurrency millionaire who funded Gilbert's recount, wrote on his website. "It's simple; we prove with mathematical certainty Joey Gilbert is the winner of the primary gubernatorial race and that he had over 55,000 votes taken from him. It's a slam dunk case. We'll post the suit, the exhibits, opinions, etc., as soon as the State publishes them."

Though Nevada law allows candidates to challenge election results based on alleged malfeasance, the lawsuit argues that the challenge is "not a political question, but rather a mathematical issue."

The lawsuit includes more than 100 pages of similar equations and graphs.

"This is a dangerous attempt led by a conspiracy theorist to instill doubt on the electoral process - which has been proven to be safe, secure and fair countless times," Sisolak spokesperson Reeves Oyster said in a statement to Salon. "It looks like Joe Lombardo's embrace of the Big Lie has finally caught up with him - because the only thing this Gilbert-backed lawsuit will do is promote infighting and further divide the Republican base ahead of the general election."

The Nevada Republican Party, whose executive committee endorsed Gilbert in the primary, expressed dismay at his refusal to concede and said it has not seen any evidence of fraud or irregularities.

"There's no indication that there's any fraud right now," party Chairman Mike McDonald told the Las Vegas Review-Journal's Colton Lochhead. "It's disappointing that those comments come out of the Republican Party."

"I don't know what his comments alluded to. My goal is to unite the party and bring everyone together so we have a Republican red wave," McDonald told the Las Vegas Sun.

Longtime Nevada reporter Jon Ralston, the CEO of The Nevada Independent, called out the state GOP for embracing Trump's conspiracy theories and Gilbert's campaign before it backfired on them.

"Can you imagine the chutzpah or stupidity or both that it takes for a guy who helped lead the voter fraud nonsense in 2020 to say something like this?" he tweeted last month. "Imagine going through life without caring about truth, without caring how you damage your own party. Absolute joke."

about GOP's war on votes