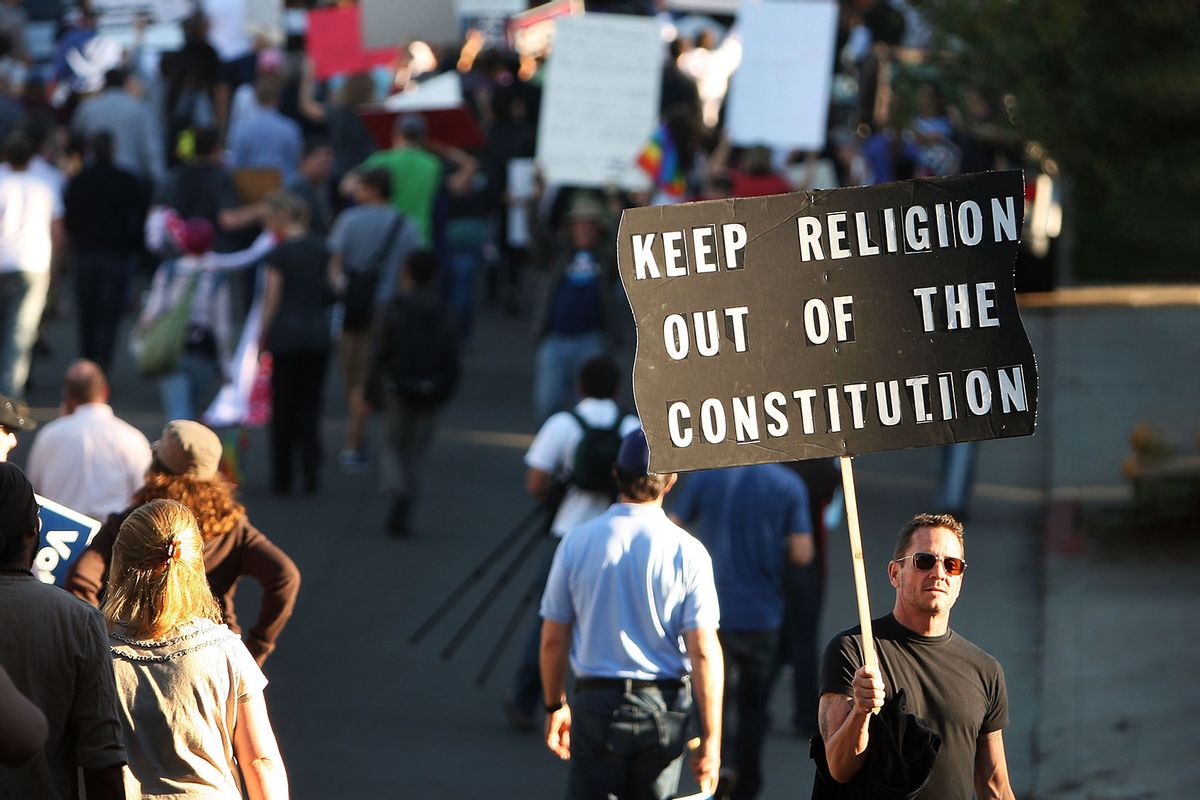 A man holding a sign reading "Keep Religion Out Of The Consitution." Hundreds of supporters of same-sex marriage march for miles in protest against the Church of Jesus Christ of Latter-day Saints November 6, 2008 in Los Angeles, California. (David McNew/Getty Images)
--

Republicans are returning to an anti-LGBTQ platform after the Supreme Court's decision ending Roe vs. Wade opened the door to rolling back other human rights in America.

On Friday, the far-right House Freedom Caucus came out against the Respect for Marriage Act, which seeks to codify in law the Supreme Court decisions that legalized gay and interracial marriage.

"The radical left has launched an all-out campaign on America's traditional values and sacred institutions," the House Freedom Caucus claimed in a statement.

"It has weakened the nuclear family, attacked the norms of masculinity and femininity, and now it wants to further erode the sacred institutions of marriage," the statement said, even though gay and interracial marriages have long been allowed.

The attacks on marriage equality are part of a trend as far-right Republicans openly campaign on bigotry.

"Since the Supreme Court decision last month overturning Roe v. Wade, anti-gay rhetoric and calls to roll back established L.G.B.T.Q. protections have grown bolder," The New York Times reported Friday. "And while Republicans in Congress appear deeply divided about same-sex marriage — nearly 50 House Republicans on Tuesday joined Democrats in supporting a bill that would recognize same-sex marriages at the federal level — many Republican officials and candidates across the country have made attacking gay and transgender rights a party norm this midterm season."

Attorney General Dana Nessel, the first openly gay politician elected statewide in Michigan, warned "the dominoes have started to fall, and they won't just stop at one."

The Human Rights Campaign has tracked over 300 anti-LGBTQ bills in 23 states.

"In Texas, Attorney General Ken Paxton said after the Roe reversal that he would be 'willing and able' to defend at the Supreme Court any law criminalizing sodomy enacted by the Legislature," The Times reported. "Before that, the Republican Party of Texas adopted a platform that calls homosexuality 'an abnormal lifestyle choice.' In Utah, the Republican president of the State Senate, Stuart Adams, said he would support his state's joining with others to press the Supreme Court to reverse the right of same-sex couples to wed. In Arizona, Kari Lake, a candidate for governor endorsed by Donald J. Trump, affirmed in a June 29 debate her support for a bill barring children from drag shows — the latest target of supercharged rhetoric on the right."