To search for alien life, Webb telescope will look for clues in the atmospheres of distant planets 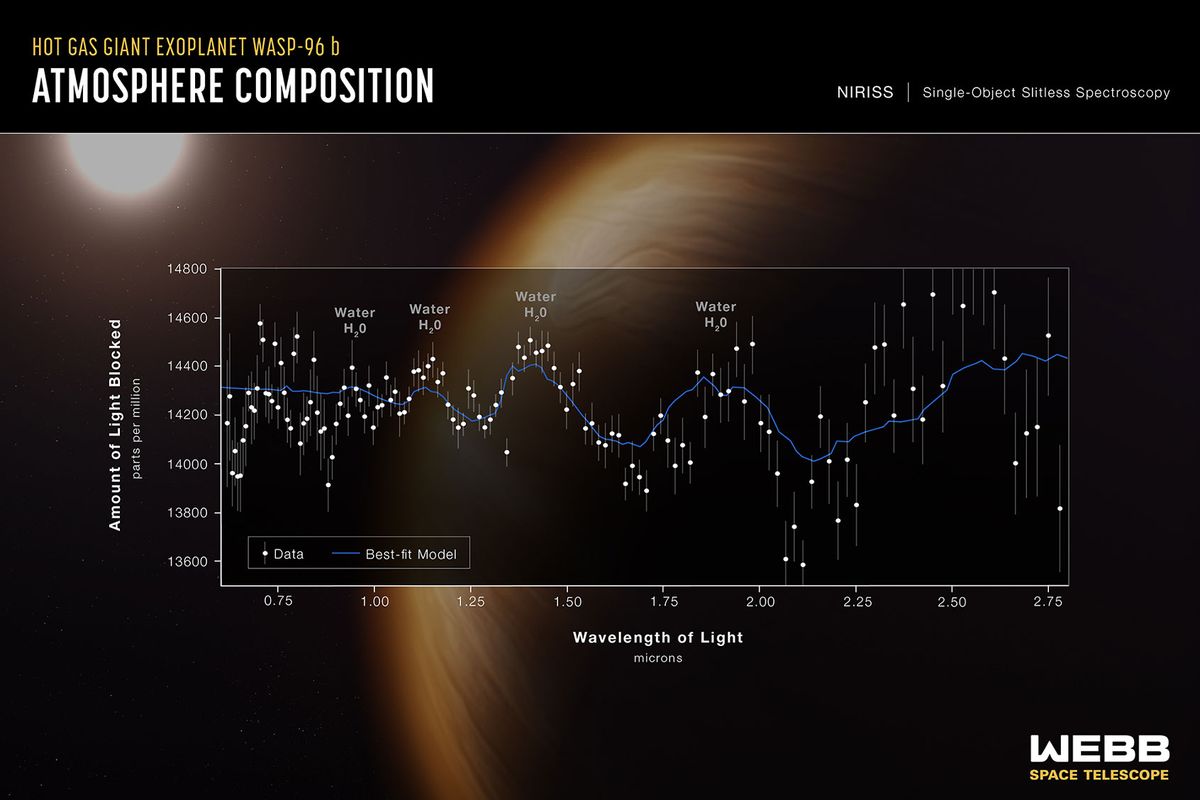 NASA's James Webb Space Telescope has captured the distinct signature of water, along with evidence for clouds and haze, in the atmosphere surrounding a hot, puffy gas giant planet orbiting a distant Sun-like star on July 12, 2022 in space. The observation, which reveals the presence of specific gas molecules based on tiny decreases in the brightness of precise colors of light, is the most detailed of its kind to date, demonstrating Webb's unprecedented ability to analyze atmospheres hundreds of light-years away. (NASA, ESA, CSA, and STScI)
--

The ingredients for life are spread throughout the universe. While Earth is the only known place in the universe with life, detecting life beyond Earth is a major goal of modern astronomy and planetary science.

We are two scientists who study exoplanets and astrobiology. Thanks in large part to next-generation telescopes like James Webb, researchers like us will soon be able to measure the chemical makeup of atmospheres of planets around other stars. The hope is that one or more of these planets will have a chemical signature of life. 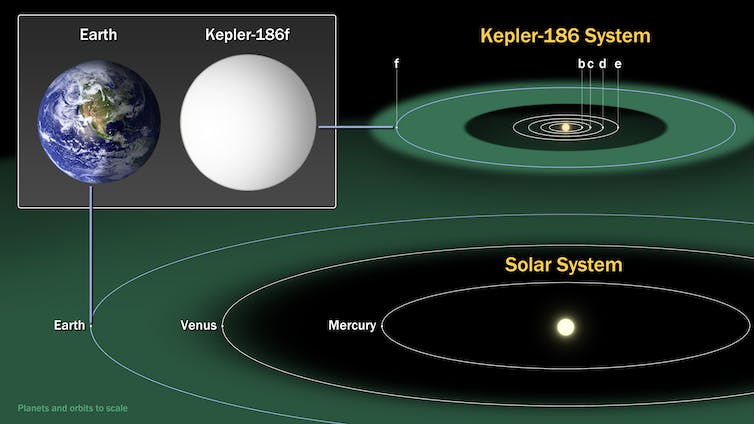 There are many known exoplanets in habitable zones – orbits not too close to a star that the water boils off but not so far that the planet is frozen solid – as marked in green for both the solar system and Kepler-186 star system with its planets labeled b, c, d, e and f. NASA Ames/SETI Institute/JPL-Caltech/Wikimedia Commons

Life might exist in the solar system where there is liquid water – like the subsurface aquifers on Mars or in the oceans of Jupiter's moon Europa. However, searching for life in these places is incredibly difficult, as they are hard to reach and detecting life would require sending a probe to return physical samples.

Many astronomers believe there's a good chance that life exists on planets orbiting other stars, and it's possible that's where life will first be found.

Theoretical calculations suggest that there are around 300 million potentially habitable planets in the Milky Way galaxy alone and several habitable Earth-sized planets within only 30 light-years of Earth – essentially humanity's galactic neighbors. So far, astronomers have discovered over 5,000 exoplanets, including hundreds of potentially habitable ones, using indirect methods that measure how a planet affects its nearby star. These measurements can give astronomers information on the mass and size of an exoplanet, but not much else. 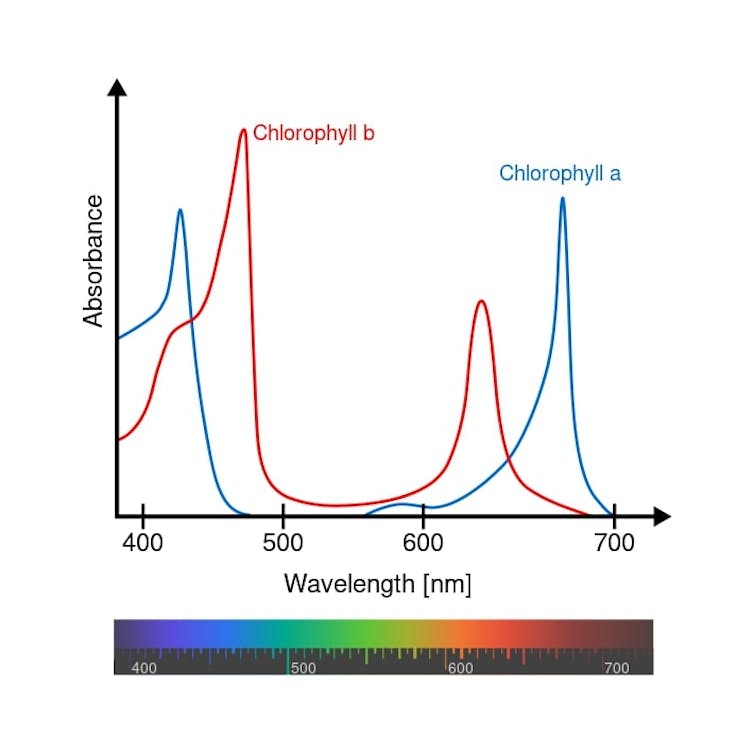 To detect life on a distant planet, astrobiologists will study starlight that has interacted with a planet's surface or atmosphere. If the atmosphere or surface was transformed by life, the light may carry a clue, called a "biosignature."

For the first half of its existence, Earth sported an atmosphere without oxygen, even though it hosted simple, single-celled life. Earth's biosignature was very faint during this early era. That changed abruptly 2.4 billion years ago when a new family of algae evolved. The algae used a process of photosynthesis that produces free oxygen – oxygen that isn't chemically bonded to any other element. From that time on, Earth's oxygen-filled atmosphere has left a strong and easily detectable biosignature on light that passes through it.

When light bounces off the surface of a material or passes through a gas, certain wavelengths of the light are more likely to remain trapped in the gas or material's surface than others. This selective trapping of wavelengths of light is why objects are different colors. Leaves are green because chlorophyll is particularly good at absorbing light in the red and blue wavelengths. As light hits a leaf, the red and blue wavelengths are absorbed, leaving mostly green light to bounce back into your eyes.

The pattern of missing light is determined by the specific composition of the material the light interacts with. Because of this, astronomers can learn something about the composition of an exoplanet's atmosphere or surface by, in essence, measuring the specific color of light that comes from a planet.

This method can be used to recognize the presence of certain atmospheric gases that are associated with life – such as oxygen or methane – because these gasses leave very specific signatures in light. It could also be used to detect peculiar colors on the surface of a planet. On Earth, for example, the chlorophyll and other pigments plants and algae use for photosynthesis capture specific wavelengths of light. These pigments produce characteristic colors that can be detected by using a sensitive infrared camera. If you were to see this color reflecting off the surface of a distant planet, it would potentially signify the presence of chlorophyll.

Telescopes in space and on Earth 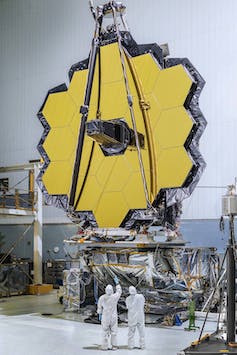 The James Webb Space Telescope is the first telescope able to detect chemical signatures from exoplanets, but it is limited in its capabilities. NASA/Wikimedia Commons

It takes an incredibly powerful telescope to detect these subtle changes to the light coming from a potentially habitable exoplanet. For now, the only telescope capable of such a feat is the new James Webb Space Telescope. As it began science operations in July 2022, James Webb took a reading of the spectrum of the gas giant exoplanet WASP-96b. The spectrum showed the presence of water and clouds, but a planet as large and hot as WASP-96b is unlikely to host life.

However, this early data shows that James Webb is capable of detecting faint chemical signatures in light coming from exoplanets. In the coming months, Webb is set to turn its mirrors toward TRAPPIST-1e, a potentially habitable Earth-sized planet a mere 39 light-years from Earth.

Webb can look for biosignatures by studying planets as they pass in front of their host stars and capturing starlight that filters through the planet's atmosphere. But Webb was not designed to search for life, so the telescope is only able to scrutinize a few of the nearest potentially habitable worlds. It also can only detect changes to atmospheric levels of carbon dioxide, methane and water vapor. While certain combinations of these gasses may suggest life, Webb is not able to detect the presence of unbonded oxygen, which is the strongest signal for life.

Leading concepts for future, even more powerful, space telescopes include plans to block the bright light of a planet's host star to reveal starlight reflected back from the planet. This idea is similar to using your hand to block sunlight to better see something in the distance. Future space telescopes could use small, internal masks or large, external, umbrella-like spacecraft to do this. Once the starlight is blocked, it becomes much easier to study light bouncing off a planet.

There are also three enormous, ground-based telescopes currently under construction that will be able to search for biosignatures: the Giant Magellen Telescope, the Thirty Meter Telescope and the European Extremely Large Telescope. Each is far more powerful than existing telescopes on Earth, and despite the handicap of Earth's atmosphere distorting starlight, these telescopes might be able to probe the atmospheres of the closest worlds for oxygen.

Is it biology or geology?

Even using the most powerful telescopes of the coming decades, astrobiologists will only be able to detect strong biosignatures produced by worlds that have been completely transformed by life.

Unfortunately, most gases released by terrestrial life can also be produced by nonbiological processes – cows and volcanoes both release methane. Photosynthesis produces oxygen, but sunlight does, too, when it splits water molecules into oxygen and hydrogen. There is a good chance astronomers will detect some false positives when looking for distant life. To help rule out false positives, astronomers will need to understand a planet of interest well enough to understand whether its geologic or atmospheric processes could mimic a biosignature.

The next generation of exoplanet studies has the potential to pass the bar of the extraordinary evidence needed to prove the existence of life. The first data release from the James Webb Space Telescope gives us a sense of the exciting progress that's coming soon.

Chris Impey is University Distinguished Professor and Associate Dean of Science at the University of Arizona. He has been doing research on science literacy for over twenty years. His most recent book is "Einstein’s Monsters: The Life and times of Black Holes," published recently by Norton.