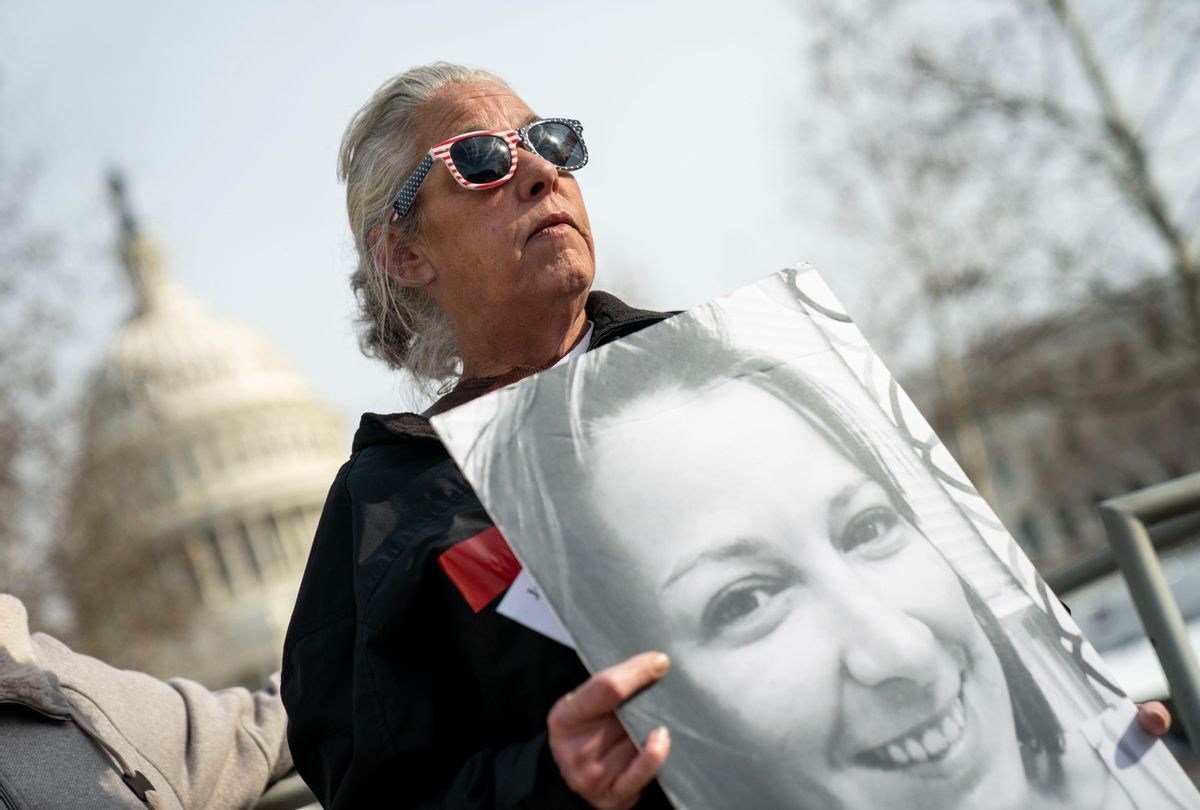 Micki Witthoeft, mother of Ashli Babbitt, holds a photograph of her late daughter who was killed in the January 6 insurrection, while talking on Capitol Hill on Thursday, Jan. 6, 2022 in Washington, DC. (Kent Nishimura / Los Angeles Times via Getty Images)
--

Ashli Babbitt's mother spoke to Rudy Giuliani on his podcast, released on Sunday, and claimed that her daughter is treated worse than a Black woman in America.

Aside from the racist claim, Babbitt joined a crowd of attackers in breaking through the windows and doors of the U.S. Capitol on Jan. 6, marched through the halls of the Capitol, then directly to the outer office of the Speaker of the House, where she helped break out the glass with a Capitol Police officer standing with his gun drawn. She chose to go through the window anyway.

"When they broke the glass in the back, the [police] lieutenant that was there—him and I already had multiple conversations prior to this—and he didn't have a choice at that time. The mob was going to come through the door, there was a lot of members and staff that were in danger at the time. And when he [drew] his weapon, that's a decision that's very hard for anyone to make and, once you draw your weapon like that, you have to defend yourself with deadly force."

Co-host Maria Ryan claimed, falsely, that there was new information becoming available about anti-fascist protesters and Capitol Police officers that she implied were actually the ones behind the Jan. 6 attack.

"New film is coming out all the time," she claimed.

"Nancy Pelosi sitting up there in her castle mad that the minions dared show up that day — well, you know there are a million strong people there to address their government and they made an attempt to kill the First Amendment," said Babbitt's mother Micki Witthoeft. "But the First Amendment isn't dead. It's wounded but it's not dead. And people are startin' to realize things that happened that day."

She went on to say that the House Select Committee is only there to "brainwash American citizens." She believes that because the Jan. 6 committee aired the public hearings in prime time that the Jan. 6 attackers now can't get a fair trial before a jury anywhere in America.

Withoeft then claimed that the officer who shot her was checking his earpiece and that a signal flare went up at the time her daughter was shot. It's unclear what she's talking about, however. She attacked the officer and questioned the investigation.

Ryan then claimed that videos show Babbitt trying to stop the men from breaking the glass, but Ryan claimed the ones decked out in MAGA gear were anti-fascists. She also claimed that Babbitt was trying to help officers, but didn't explain why then Babbitt climbed through the glass while an officer had a pointed gun at her. Ryan claimed there was no warning before he fired, which is also false, as a video shows the officer had his gun aimed at them as they were trying to break the glass.

As of June 2022, Babbitt's family hasn't filed a lawsuit against the Capitol Police saying they would in Aug. 2021, the New York Daily News reported.

Listen to the rant below: