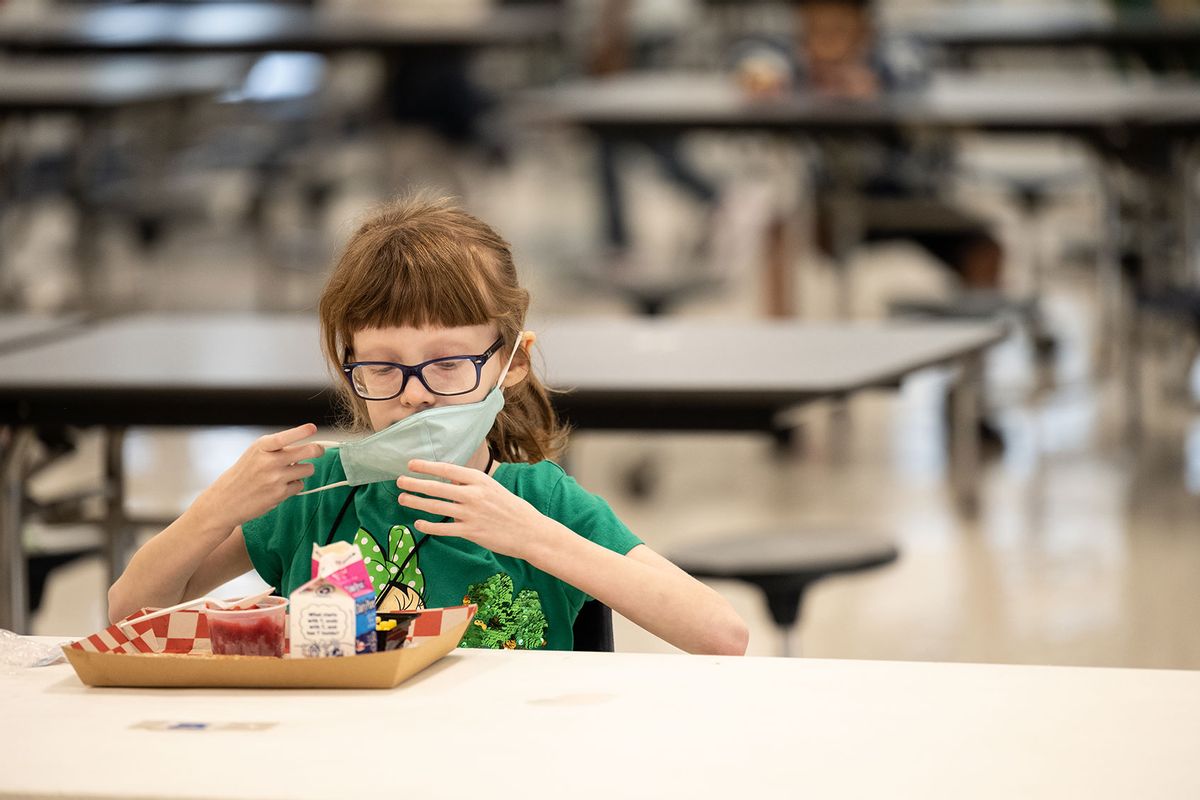 A child puts her mask back on after finishing lunch at a socially distanced table in the cafeteria of Medora Elementary School on March 17, 2021 in Louisville, Kentucky. (Jon Cherry/Getty Images)
--

Over twenty state attorneys general, including Texas Attorney General Ken Paxton and Indiana Attorney General Todd Rokita, have signed onto a lawsuit arguing that the Biden administration is using federal funding for meals to illegally force schools into complying with the federal government's anti-discrimination policies.

The suit, originally mounted by Tennessee Attorney General Herbert Slatery, centers on the Department of Agriculture's school meal program which requires that participating schools "investigate allegations of discrimination based on gender identity or sexual orientation." Evidence suggests that LGBTQ+ and students of color face the highest rates of food insecurity.

"Whether you are grocery shopping, standing in line at the school cafeteria, or picking up food from a food bank, you should be able to do so without fear of discrimination," Food, Nutrition and Consumer Services Deputy Under Secretary Stacy Dean said back in May, when the policy was first rolled out.

Since then numerous states – like Alabama, Arkansas, Nebraska, Ohio, and Virginia – have objected to the program, claiming that it constitutes a "misapplication of U.S. Supreme Court precedents,"

"We all know the Biden administration is dead-set on imposing an extreme left-wing agenda on Americans nationwide," wrote Slatery and Indiana Attorney General Todd Rokita and Tennessee in the suit. "But they've reached a new level of shamelessness with this ploy of holding up food assistance for low-income kids unless schools do the Left's bidding."

Their suit specifically argues that Biden's federal agencies are warping federal law to their own liking and will cause "regulatory chaos that threatens essential nutritional services," Rokito's office added, as The Hill reported

Earlier this month, a judge sides with the attorneys general, contending that the federal program undermines states' ability to institute their own laws. A number of the states at hand have already enacted laws that prohibit trans students from accessing gender-affirming care and participating in sports teams that match their gender identity.

The suit comes amid a rising tide of anti-LGBTQ+ sentiment.

Back in March 2020, the Southern Poverty Law Center reported that anti-LGBTQ hate groups soared by 43 percent in the year prior. And just this May, President Biden warned of a"'rising hate and violence" against the LGBTQ+ community, stressing that "we continue to witness disturbing setbacks and rising hate and violence targeting LGBTQI+ people in the United States and around the world. This is wrong."