Trump-backed Jan. 6 attendee who vowed to "decertify" 2020 could be Arizona's next election chief

Mark Finchem is a supporter of the far-right Oath Keepers militia who attended Trump's Jan. 6 rally 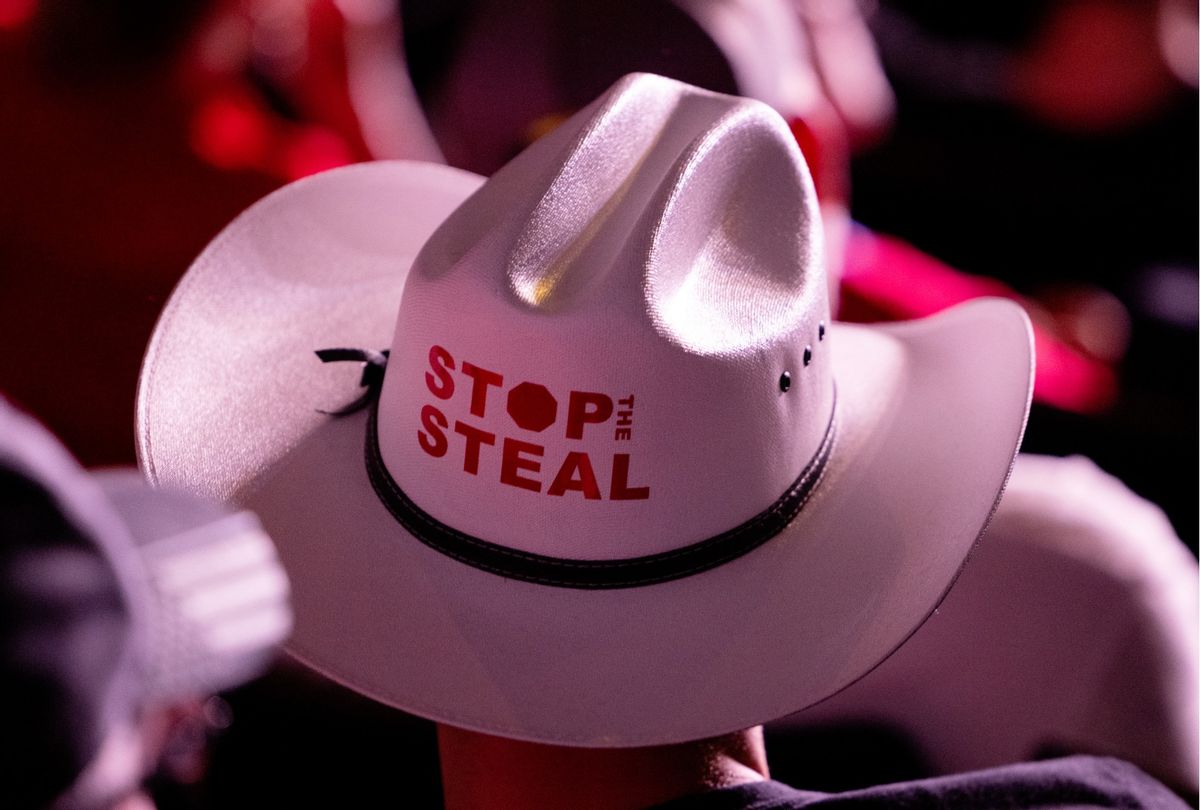 Person in a stop the steal cowboy hat at the Protect Our Elections Rally at the Arizona Federal Theater in Phoenix, AZ July 24, 2021. (Cassidy Araiza for The Washington Post via Getty Images)
--

This Tuesday, August 2, Arizona's Republican and Democratic primary elections will be held, and residents of the Grand Canyon State will be voting for everything from governor to secretary of state. On the GOP side, it remains to be seen whether the nominees will be far-right MAGA conspiracy theorists or more traditional conservatives — and the Donald Trump-backed MAGA candidates include gubernatorial candidate Kari Lake and secretary of state hopeful Mark Finchem, both of whom have been campaigning on the Big Lie and making the false claim that the 2020 presidential election was stolen from Trump.

Finchem, who serves in the Arizona House of Representatives, is way beyond conservative; he's a supporter of the far-right militia group the Oath Keepers who, in 2013, said that President Barack Obama was trying to establish a "totalitarian dictatorship." And if Finchem wins the primary on August 2 and goes on to win the general election in November, Arizona's top elections official will be someone who attended Trump's "Stop the Steal" rally in Washington, D.C. on January 6, 2021 and falsely claims that President Joe Biden wasn't legitimately elected.

In an article published by Politico on August 1, journalist Zach Montellaro notes, "Mark Finchem — a poster child for election deniers following the 2020 election — is inching closer to becoming the chief election official in one of the most tightly divided battleground states in the country. Finchem, an Arizona state lawmaker, is running with former President Donald Trump's endorsement in Tuesday's Republican primary for secretary of state there. He has support from a coalition of other like-minded candidates running to be election administrators in their own states, which has gained traction in several other close 2020 swing states. And Finchem has a significant edge in a rare public poll of the secretary of state race published Friday."

The poll that Montellaro is referring to was conducted by OH Predictive Insights and released on July 29. According to OH, Finchem is leading primary opponent Beau Lane by 21 percent — and Lake, in Arizona's GOP gubernatorial primary, is leading opponent Karrin Taylor Robinson (who conservative Republican Gov. Doug Ducey has endorsed) by 18 percent.

Finchem is a member of the America First Secretary of State Coalition, a far-right group that seeks to put MAGA Republicans in control of the administration of elections in different states. The group ran into a brick wall in Georgia, where Secretary of State Brad Raffensperger — a conservative Republican who, like Gov. Brian Kemp, famously resisted Trump's coup attempt in the Peach State after the 2020 election — won his primary by double digits. But in other states, including Nevada and Pennsylvania, the America First Secretary of State Coalition has been more successful.

"Should he win on Tuesday," Montellaro explains, "Finchem will become the latest member of the America First Secretary of State Coalition to secure the Republican nomination in a key battleground, putting them a general election win away from running the 2024 presidential vote in their states — four years after working to subvert President Joe Biden's election win and falsely claiming the vote was marred. The coalition's founder, Jim Marchant, is the Republican nominee in Nevada, while Kristina Karamo is the de-facto GOP pick in Michigan. And in Pennsylvania, where the governor picks the state's chief election official, coalition member Doug Mastriano is the GOP candidate…. Finchem does face significant opposition in the primary, including from Beau Lane, a businessman endorsed by GOP Gov. Doug Ducey."

Montellaro continues, "But if the latest polling is any guide, Arizona Republicans are poised to elevate someone who has relentlessly sought to undermine confidence in state elections as their pick to run future elections. Finchem has been one of the chief proponents of election conspiracy theories since the 2020 election. He was a significant booster of the GOP-led review of all of the ballots cast in 2020 in Maricopa County, Arizona's largest county, which was strongly opposed by the Republican-dominated county government and a bipartisan cast of election officials. Finchem also advocates the fanciful plan of 'decertifying' the 2020 election results in Arizona, which has no basis in the law, and he counts others who worked to undermine American elections among his prominent supporters, including Michael Flynn, Jenna Ellis and Mike Lindell."