What happened in Kansas: Americans know that rights are not just suggestions

Right-wingers thought they had a foolproof game plan in Kansas. It fell apart, and that could change everything 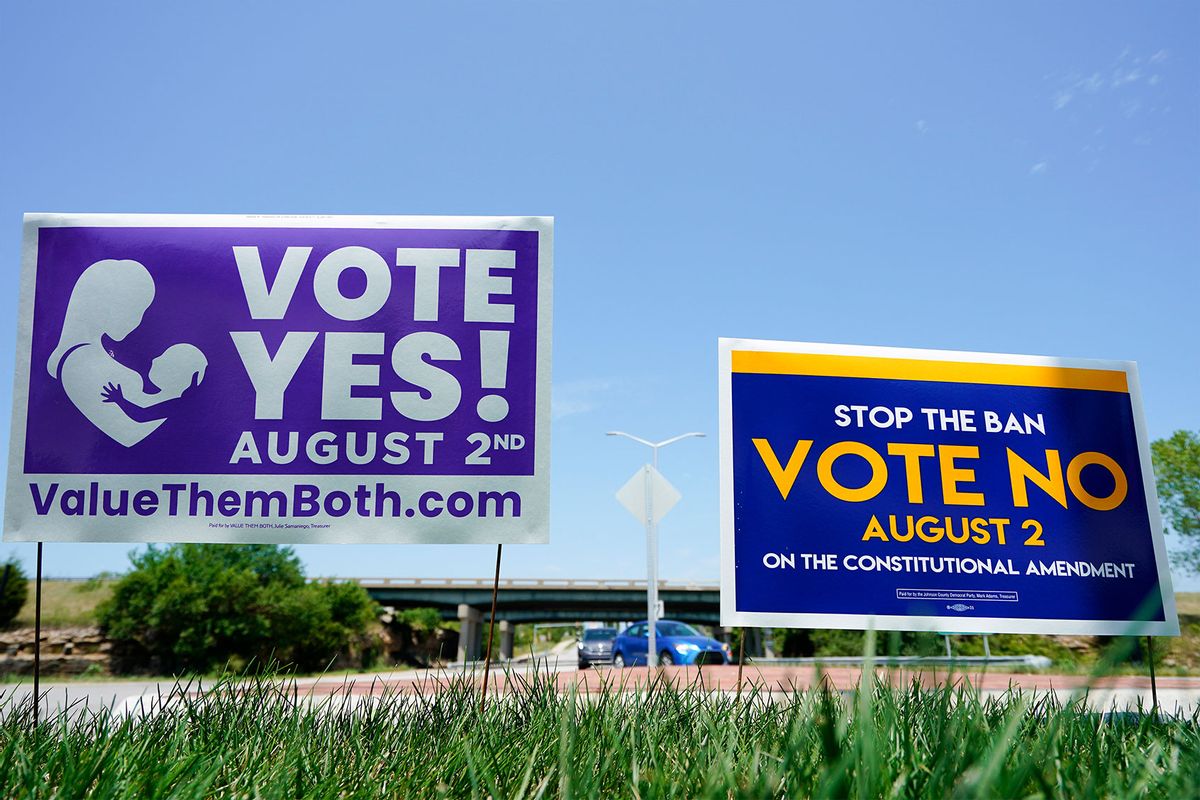 Signs in favor and against the Kansas Constitutional Amendment On Abortion displayed outside Kansas 10 Highway on August 01, 2022 in Lenexa, Kansas. (Kyle Rivas/Getty Images)
--

Pundits have been wearing out their thumbs on Twitter ever since the results of the Kansas referendum on abortion came in Tuesday night. The victory on the "No" side, against amending the state constitution to remove its protection of abortion rights, was decisive, 59 to 41 percent. Voting "Yes" in the referendum meant that the constitution could be amended and laws further restricting or banning abortion entirely could be passed in the state.

Republicans had made the vote confusing on purpose. To a casual observer, a "no" vote might seem to mean you were against abortion rights, and "yes" vote that you were for abortion rights, when in fact it was the other way around. The state Republican Party also scheduled the vote on primary day in August, when turnout is typically much heavier for the GOP in a state where Republicans outnumber Democrats almost two to one and frequently have competitive primary contests, while Democrats rarely do and their voters often don't bother to show up.. Furthermore, Republicans were betting that turnout among independents would be low because they are not permitted to vote in either party's primaries.

That strategy failed across the board. Turnout among Democrats was high, as it was among independents, all of them apparently driven to the polls by the abortion referendum on the ballot. The vote by political party was not monolithic, either, with many Republicans crossing over to vote no. Even in the conservative rural counties of western Kansas, which Donald Trump carried by lopsided margins in 2020, the vote against the referendum measure was in the range of 40 percent, meaning that many Republicans voted to preserve abortion rights

Republicans put this referendum on the ballot because a 2019 state Supreme Court decision, on a 6-1 vote, found that the Kansas Constitution protects a woman's right to abortion.  Why did a conservative court in a conservative state find a right to abortion in a state constitution where the word "abortion" did not appear? Because of  the first sentence of the Kansas constitution's Bill of Rights, which borrows from the language of the Declaration of Independence: "All men are possessed of equal and inalienable natural rights, among which are life, liberty, and the pursuit of happiness." The court wrote:

We conclude that, through the language in section 1, the state's founders acknowledged that the people had rights that preexisted the formation of the Kansas government. There they listed several of these natural, inalienable rights—deliberately choosing language of the Declaration of Independence by a vote of 42 to 6. We are now asked: Is this declaration of rights more than an idealized aspiration? And, if so, do the substantive rights include a woman's right to make decisions about her body, including the decision whether to continue her pregnancy? We answer these questions, "Yes."

Included in that limited category is the right of personal autonomy, which includes the ability to control one's own body, to assert bodily integrity, and to exercise self-determination. This right allows a woman to make her own decisions regarding her body, health, family formation, and family life—decisions that can include whether to continue a pregnancy.

The word "resounding" comes to mind, doesn't it?

It was the decision of the Kansas Supreme Court that was on the ballot last Tuesday. Did Kansans believe that their state and its government were founded on principles that were worth standing by? Did they, in the words of the court, believe that their constitution's words were "more than an idealized aspiration?"

That's what the vote was about. Did the words that founded the nation, and were then employed to found the state of Kansas, have meaning? Voters were being asked, in effect, whether the word "rights" has meaning. Both the federal and state constitutions have bills of rights. They are not bills of doubts, or bills of exceptions, or bills of maybes, or bills of questions. The Constitution of the United States is said to be the supreme law of the land, just as the constitution of Kansas is the supreme law of that state. They are not suggestions; they are laws.

You don't get to vote on laws very often. You vote for people to represent you, and those people make the laws. But this time, Kansans got a chance to vote on the law that grants a woman the right to control her own body, and they voted for it — yes, resoundingly.

Do the words that founded the nations have meaning? Does the word "rights" have meaning? That's what Kansas voters were asked to decide.

The question now is whether that vote will translate into votes in Kansas and other states for people who make laws that respect the principles this country was founded on, or whether so-called conservatives will continue to vote for people who make laws of convenience, or laws crafted to fit in with other principles such as those found in religious texts or political rhetoric.

The New York Times published a story after the vote on Tuesday suggesting that if polling on abortion rights reflected how voters around the country might decide similar referendums in other states, "around 65 percent of voters nationwide would reject a similar initiative to roll back abortion rights, including in more than 40 of the 50 states." Well, Republicans may be rigid, but they aren't stupid: The Times story and those numbers can be counted on to assure that Republicans will resist any movement to put the right to abortion up to a popular vote in states across the nation.

Though the vote in Kansas is cause for celebration, the answer to how much it matters will come in November, when voters in all 50 states go to the polls and are faced with a reality that has been there all along: It's not just about who you're voting for, it's about what they stand for.

on the fight for reproductive rights