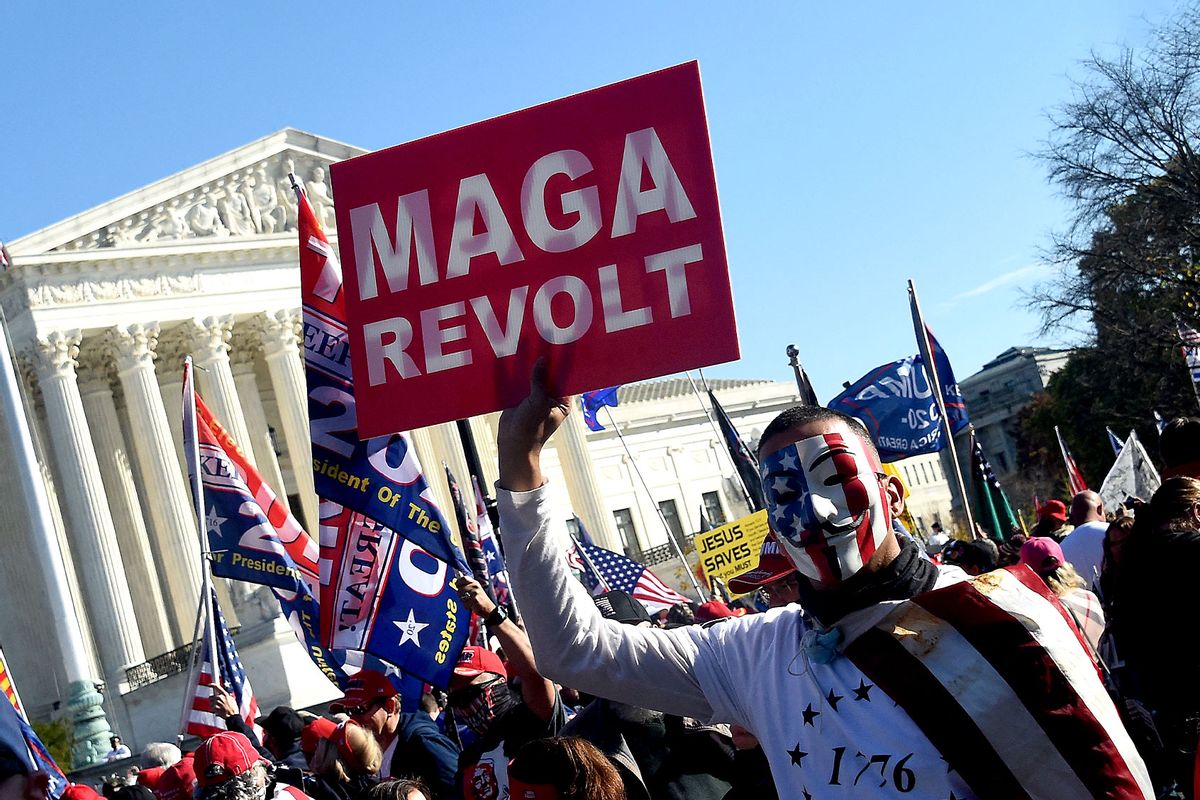 Supporters of Donald Trump rally at the US Supreme Court in Washington, DC, on November 14, 2020. (OLIVIER DOULIERY/AFP via Getty Images)
--

In the hours following the Federal Bureau of Investigation's search of former President Donald Trump's Mar-a-Lago resort in Palm Beach, his supporters began rallying around the cry of "civil war."

The search, which took place Monday night, was carried out as a part of an investigation into Trump's mishandling of classified documents from his time in office. The FBI was reportedly searching the estate for boxes of federal documents that they believe Trump brought back from the White House, although federal authorities have not confirmed. The act of taking classified documents from the White House is considered a violation of federal law.

Trump immediately released a statement claiming that the search was comparable to the Watergate Scandal of 1972, when former President Richard Nixon's political operatives broke into the Democratic National Convention.

"My beautiful home, Mar-a-Lago in Palm Beach Florida is currently under siege, raided, and occupied by a large group of FBI agents," Trump said in a statement. "Such an assault could only take place in broken, Third-World Countries. Sadly, America has now become one of those Countries, corrupt at a level not seen before. They even broke into my safe!"

In the moments following to search, MAGA world erupted.

Far right extremist groups, like QAnon, immediately called for a violent response to the search and classified it as a political attack by the Biden administration. Hundreds of Trump supporters gathered outside Mar-a-Lago to protest the investigation.

"This is the rogue behavior of communist countries, NOT the United States of America!!!," Greene tweeted. "These are the type of things that happen in countries during civil war."

Stephen Miller, a former senior adviser to Trump, hopped on Fox News to call the FBI an agent of an imperial government.

"We are truly living in a situation where the FBI has become a praetorian guard from Rome where they take it unto themselves to decide who wields power in this country," Miller said.

GOP congressional candidate Laura Loomer agreed that the FBI search was an act of war.

"Time to take the gloves off. It's been time. If you're a freedom loving American, you must remove the Words decorum and civility from your vocabulary. This is a WAR!," Loomer wrote on her Telegram channel. Loomer has been banned from Twitter since 2018 when she posted racist tweets about Rep. Ilhan Omar, D-Minn.

The cries of "civil war" fall in line with a shocking survey published in July that half of Americans believe the United States is headed towards a civil war.

Researchers from the University of California-Davis Violence Prevention Research Program and the California Violence Research Center found that 50.1 percent of survey respondents at least somewhat agree that a civil war will happen soon. About 14 percent said that they either "strongly" or "very strongly" agree.

The researchers said that the study was sparked by the United States' current political climate and Trump's perpetuation of "The Big Lie."

"The motivating premises for this survey were that current conditions in the US create both perceived threats and actual threats to its future as a free and democratic society," they wrote. "The findings bear out both premises."

Whether people see it in terms of an impending "civil war" or not, the study found that ultimately two thirds of Americans believe that democracy is facing a "serious threat."

"We are now closer to civil war than we have been at any time since 1865," reporter Tim Alberta wrote on Twitter.