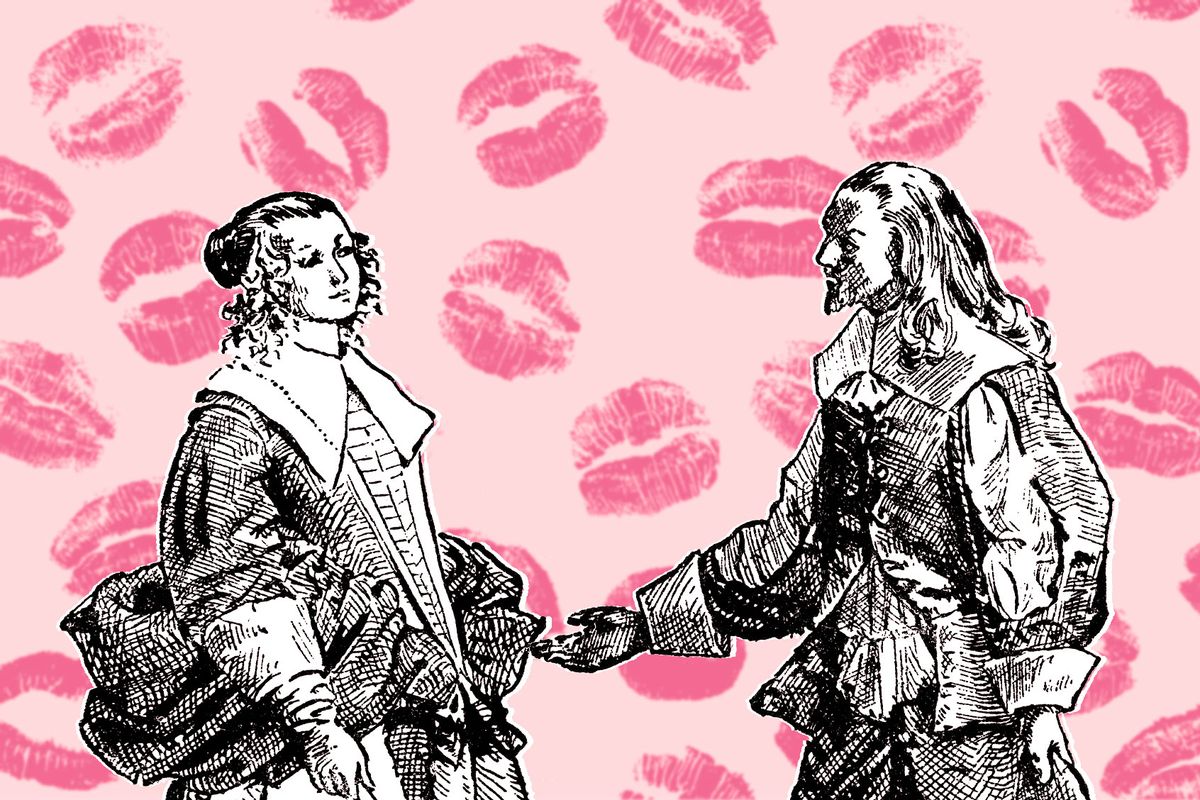 America as "puritanical." We hear this often, but what does it mean? The term harkens back to a group of the country's earliest European immigrants — the Puritans — who established the Massachusetts Bay Colony in the 17th century. They fled England, seeking freedom to practice their particular form of Christianity. As a loose political and theological movement, their name derives from members' desire to purify the Church of England as well as their emphasis on moral purity. Puritanical, as a pejorative term, now conjures visions of austere religion, a censorious attitude, and strict demands for adherence to behavioral rules.

The heritage of the Puritans lives on in the United States they helped found through an enduring leeriness toward sex. We see the persistence of this puritan impulse in what's sometimes referred to as "pearl clutching": a shocked, wide-eyed, disapproving stance of Oh, my! Do people really do that? and That must stop at once! (Cue visual of an older lady, hand to throat, catching hold of her proverbial string of pearls, but note also the misogyny of that stereotype, as if only women are stodgy reactionaries.)

Can women be saved from bad sex?

Where do these narratives about sexuality come from? How does a society use them to regulate its people's attitudes and behaviors? The high-stakes nature of sexuality certainly poses a challenge for any society. To better understand America's particular story about sex, we can turn to the work of sociologists John H. Gagnon and William Simon. They developed an influential theory about how societies navigate this challenge by crafting stories or "scripts" about sexuality.

The heritage of the Puritans lives on in the United States they helped found through an enduring leeriness toward sex.

According to Gagnon and Simon, these sexual scripts train people in what counts as proper conduct or allowable sexual behavior in any given time and place. The culture tells us how to live out our sexuality, but people also craft their own stories that either fall in line with the dominant discourse or tell a counternarrative. Sexual scripts interact with gender scripts—stories about what it means to be a man or a woman, cultural codes that teach you how to perform your gender role "properly," in accordance with the dominant norms—that, again, people either enact or push back against, particularly when the role doesn't make for a good fit. Social script theory thus argues that norms about sexuality and gender are not purely natural or God-given but are shaped by societal expectation and interaction. The script gains its authority, however, precisely through the claim that these norms are not a product of the culture but a fact of the natural order or divine will.

What is the sexual script in American culture? It's actually twofold—and contradictory. That's why the culture often feels puritanical and porn-saturated, both at the same time: a nation shaped by a Puritan founding history, inhabiting a pop culture landscape saturated with sex. America talks about sex through two contrasting scripts that function as the legacy of two warring impulses, two different master narratives twisted together in the country's history. The root of this complicated American attitude toward sex is the puritan versus the free love view of sexuality and sin, a dynamic itself rooted deep in Christian theology.

While the American reserve and squeamishness about sex speak to the influence of the early Puritans, it's not entirely fair that we use their name to mean prudish and anti-sex. The history and theology are more complex than this derogatory stereotype suggests. Like Augustine, Puritans were not against sex, per se. They saw sex in marriage as good. Women were entitled to sex from their husbands, partly so they could have children; a husband's impotence was an allowable reason for a woman to request divorce. Even more so, sexual pleasure in marriage was held to be good and fitting and sanctioned by God. Puritans could be quite sex-positive, delighting in the lusty bed play of husband and wife.

John Cotton, a revered Puritan minister of the Massachusetts Bay Colony, preached a 1694 wedding sermon on the goodness of marriage and sex using the biblical phrase that woman is "companion and helpmeet" to man (Gen. 2:18). "She is a most sweet and intimate companion, and an entire friend; there is no stricter or sweeter friendship than conjugal; as it was the first in the world, so it is most natural."

It's sex outside these sanctioned limits that poses a problem. Here's where this particular sexual script starts to sound rather, well, puritanical. The script mandates that sex must be married, heterosexual, monogamous, reproductive, not too kinky, and patriarchal—part of a male-led structure of family and society. Yes, sex is good—even very good—but the goodness adheres only within these strict limits said to define moral purity. Violating the norms comes at a high price. This is true especially for women: the scarlet letter A for adulterer continues in double-standard purity codes that still function to regulate the sexual behavior of women, more so than men, and that punish deviation from the norm.

Today, women get branded with a scarlet S: she's such a slut. The sneer echoes across college campuses in the ritual of the morning-after-the-night-before "walk of shame," she in her heels, tugging on her skirt too short for the morning sunlight, the guy getting high fives back at the frat house. This puritan version of America's sexual script—the story that the culture tells its people about sex—blends elements of traditional gender roles, religion, and capitalism (sex as reproductive, making new workers for farm and factory and citizens for the state). The script, with its regulatory mechanism of slut-shaming, benefits the status quo and keeps intact entrenched systems of male power and control.

Today, women get branded with a scarlet S: she's such a slut.

In contrast to the puritan sexual script is the script of America's free love movement of sexual liberation. The free love script stands in the 2,000-year-old history of what scholars call antinomianism in Christian thought. Nomos means "law" in classical Greek; antinomian refers to the "anti-law" tradition in Christianity. An early instance of antinomian free love provokes the apostle Paul to write to the Corinthians in his New Testament letter. The first-century CE community of Christian converts in Corinth, Greece, had apparently been indulging in sexual licentiousness—Paul mentions a "man living with his father's wife" (1 Cor. 5:1), adultery, prostitution (1 Cor. 6:9)—with the belief that faith in Christ frees them from the old law and the sexual purity codes of the Hebrew Bible. Paul counters this anti-law argument: "All is permitted, although not all is edifying" (1 Cor. 10:23). Paul's corrective points out a misunderstanding: being freed from some laws doesn't mean you're freed from all laws.

But what laws, then, are binding, and how are we to know? Antinomians raise questions about the efficacy of the law or whatever a society takes to be the standard moral order. They view society's traditional moral rules as nonbinding and consider at least some norms of religion or society as open to revision based on new insight. Versions of the antinomian controversy raged throughout Christian history, debated by theologians and enacted by various groups. Early Christianity and Paul himself are antinomian in their rejection of many Jewish laws, as the new sect of the Christ-followers separated itself from its origins in Judaism. Paul, for example, rejects the Jewish laws of circumcision and kosher dietary practice. Centuries later, the Protestant Reformation would be antinomian in its rejection of Catholic Church law on various points such as the celibacy of the clergy.

The question animating these debates is how correct any particular set of behavioral rules is in aiding the individual and the community to achieve the good. And who gets to decide? Is the authority for setting and revising the rules to be individual conscience, societal tradition, new consensus, government regulation, religious claims about God's will, or something else entirely?

In terms of sexuality—who is allowed to marry or be sexually intimate with whom, what makes sex "good" in our dual sense of ethical and pleasurable—the antinomian debate evolved in America into what became known as the free love movement. From the 19th century to the 1960s to today, this version of America's story about sex argues for freedom from the received sexual norms and freedom to rewrite these sexual scripts. The free love movement was complex, with different aims, and often used "free" in different senses: that people should be free to choose the love partner they please, that unions should be free from the interference of governmental marriage and divorce laws, that parenthood should be voluntary through freely available birth control (often outlawed by US and state governments well into the twentieth century).

Some, but not all, free love thinkers advocated against monogamy as a restriction of individual freedom.

Some, but not all, free love thinkers advocated against monogamy as a restriction of individual freedom. Many explicitly linked free love to the early women's rights movement, comparing marriage to slavery in a time when the law granted men control over a wife's money and property and allowed a husband to beat and rape a wife. Antinomian reform efforts led to experimental social utopian communities such as Oneida, in the state of New York, founded in 1848 by the Christian writer John Humphrey Noyes. Noyes is the one who coined the term free love, as well as complex marriage, to describe the open, although still regulated, sexual relationships practiced by the members of the Oneida community.

This 20th century antinomian version of the sexual script aligned with a long-standing American defense of individual rights, personal autonomy, and self-determination. It aligned with libertarian concerns about government overreach—that government had no place in the privacy of the nation's bedrooms. It resonated with America's overall championing of freedom as a central ideal, although never yet a full reality achieved equitably for all.

This freedom refrain—to unchain sexuality from unnecessary restrictions, to liberate love from restraints that impede the good that sexuality makes possible—resounds from biblical Corinth, to Renaissance Germany, to nineteenth-century Oneida, to 1967 San Francisco when one hundred thousand hippies gathered for the "Summer of Love," to the American college hookup scene. Which brings us to the present.

about sex and cultural scripts

Catherine M. Roach is the author of "Good Sex: Transforming America Through the New Gender and Cultural Revolution" (October 4, 2022; Indiana University Press). She has 25 years of grant-funded research experience on gender, sexuality, and American popular culture. A two-time Fulbright awardee with a PhD from Harvard and publications in both fiction and non-fiction, she's been an invited visiting professor in Canada, Australia, and Europe. She is Professor of New College, an innovative liberal arts program at The University of Alabama, where she's won the school's top research and teaching awards and where she offers a popular cross-university course titled "Sexuality and Society." She is based in Tuscaloosa, Alabama.